Woohoo for Birdman! Last night’s win for Birdman makes it a back-to-back coup for the Academy Award going to the best film of the night. Birdman nabbed four wins overall, tying The Grand Budapest Hotel as the big winner of the show, including notable wins for Best Director and Best Cinematography. Alejandro G. Iñárritu’s win in the former category made back-to-back wins for Mexican directors following Alfonso Cuaron’s prize for Gravity year (and made it five years in a row that Best Director has not been rewarded to an American) while cinematography winner Emmanuel ‘Chivo’ Lubezki enjoyed the rare honour of winning back-to-back after claiming the prize for Gravity at last year’s ceremony. It’s too bad that Birdman’s Michael Keaton gave the performance of a lifetime and wasn’t among the winners, since his brave and wholly original performance made Birdman the daringly original and entertaining film it is (and it’s impossible to argue against winner Eddie Redmayne’s remarkable turn in The Theory of Everything), but at least he got some time on stage with the biggest win of the night. Birdman’s a great choice to define a strong year in maverick independent filmmaking.


Birdman prevailed in a close race with Boyhood, whose Best Picture loss was foreshadowed when the twelve-years-in-the-making project lost Best Film Editing to the conventional (if intensely jazzy) Whiplash, but the real surprise of the night was how few surprises popped up in a field that most Oscar watchers were calling the closest crop of contenders across the board. The only big upset was Disney’s Big Hero 6 topping Dreamworks’s odds-on favourite How to Train Your Dragon 2, so the biggest surprise wasn’t who won, but what the winners had to say.
After host Neil Patrick Harris kicked off the show with one of the best and most entertaining opening numbers the Oscars have seen in years, heavy favourite J.K. Simmons (Whiplash) won the first award and gave a bizarre (if enjoyably spontaneous) bit of rambling on how kids should call their parents. Pawel Pawlikowski (Ida) gave the longest and most rambling ­give him the hook moment of the night upon accepting the award for Best Foreign Language Film for Ida and encouraging friends in Poland to have a drink, while Matt Kirby, whose The Phone Call won Best Live Action Short, plugged some free donuts before getting his bearings and thanking the cast and crew. Many of the other big winners used their moments to get political and sometimes it worked and sometimes it didn’t. (More on those later.)

Host Neil Patrick Harris similarly had a streak of hits and misses, but his jokes were on the mark more often than not. The opening number about why we love movies was a grand overture for the show: lots of fun theatricality with nods to the nominees themselves and a few jabs at the industry with some help from Anna Kendrick and Jack Black, respectively. Harris also wasn’t afraid to acknowledge some of the biggest controversies of the season by welcoming “the whitest, er, brightest” in the industry and by chirping “Oh, now you love him” when the audience clapped for Selma snubbee David Oyelowo. Harris’s running bit with an envelope of Oscar predictions guarded under the watchful eyes of a game Octavia Spencer ran out of steam quickly though, and it kept on slugging through the night and inspired a few Tweets of #FreeOctavia. His Birdman backstage spoof featuring Whiplash’s Miles Teller on the drums redeemed him, however, as did his gag that nominee Marion Cotillard was the only person in the room who could correctly pronounce escargot (or, as he said, ess-car-git), which funnily mirrored all the red carpet interviews with Marion that basically began with interviewers stating, “So, you’re foreign...”


Post by Cinemablographer.
The night itself was lots of fun at an Oscar party hosted by one of my friends where we mostly rooted for Birdman and The Grand Budapest Hotel. Both films were well represented on the impressive Oscar-themed potluck (our best so far), which consisted of spicy Birdman wings, drumsticks for Whiplash (both chicken and the ice cream kind), popcorn with Glosette raisins (also for Whiplash), ‘Tits up’ peas and potatoes (The Theory of Everything), cold mush cookies (Wild),  white cupcakes with gummie worms to rep the most infamous Oscar snubs (Cake’s Jennifer Aniston, the Selma team and Nightcrawler), and Courtesan au chocolats straight from Zubrowka to rep The Grand Budapest Hotel. There was even the ballin’ addition of caviar, which we agreed could stand in for Russia’s Leviathan, but I doubt anyone would have minded had we been unable to pair it with a nominee. (It was tasty!)

The fine spread made for a really fun evening with Birdman’s win offering a nice final course. Here are the highs and lows of Oscars 2015:

At first I rolled my eyes when Boyhood’s Patricia Arquette accepted her very much deserved Oscar for Best Supporting Actress and whipped out the same scripted speech she’s being using all season. “How dull, I thought,” but then she took a new page and got political by demanding equal wages for women in America. Political plugs usually make the Oscars awkward, but Arquette got a roaring response from the crowd. Meryl Streep’s particularly inspired ‘You go girl!’ reaction brought the house down everywhere from our apartment to the Twittersphere. This is why she’s Meryl F---ing Streep!

Highlight of award season by far.

Julianne Moore netted a well-deserved Oscar for Still Alice on her fifth nomination. She was the best and hardest working actress without an Oscar going into the ceremony, and it was really nice to see her finally get her due, especially for such a strong performance. Her giddy speech was both exciting and heartfelt as she used the opportunity to acknowledge those who, like her character Alice, are suffering with Alzheimer’s, and she made an especially touching nod of thanks to directors Richard Glatzer and Wash Westmoreland, who continue their passion of making movie in spite of Glatzer’s diagnosis for ALS. This win capped off a banner year for Moore that began with a Best Actress win at Cannes for Maps to the Stars for which she is nominated for Best Actress at the upcoming Canadian Screen Awards.

In perhaps the most unexpected moment of the night, frontrunner Graham Moore accepted his prize for Best Adapted Screenplay for The Imitation Game and used the sad story of subject Alan Turing to reveal his own attempt at suicide at the age of sixteen. It was one of those great, candid moments when one really felt the significance of the film and the win for the person on stage, as well as for all the people he had in mind while writing it.


High and low: "In Memoriam"

Meryl Streep highlight number two of the night was her sincere and moving eulogy for all the dearly departed members of the film community we lost this year. As she paid tribute to some of the best and most inspiring talents who moved us, it was hard not to think that Streep was saying goodbye to her long time collaborator Mike Nichols (Silkwood, Postcards from the Edge) with whom she had a project in development at the time of his passing in November. Fittingly enough, the tribute reel ended with Nichols, who won an Oscar for directing The Graduate.

However, the “In Memoriam” sequence featured a glaring snub by failing to acknowledge the loss of Joan Rivers, who arguably made the Oscars the buzz-worthy event they are today. The queen of the red carpets deserved a nod of thanks for her years of getting audiences excited about the glitz and glamour of the event. While she wasn’t known for making movies, Rivers’ name is indeed synonymous with the Oscars. They just weren’t the same without her. (The Academy has responded by noting Rivers’ inclusion on their website alongside other peers who weren’t included due to time restraints.)
Low: Glenn Greenwald holds an Oscar.

It disappointed me that frontrunner Citizenfour took the prize for Best Documentary Feature and easily became the weakest winner in the category in over a decade. (The film boasts an important subject matter in its scoop with Edward Snowden, but there’s nothing remarkable about Laura Poitras’s attention to film form or argumentation. It’s a hunk of raw, unattractive footage.) The Citizenfour team added insult to injury by bringing subject Glenn Greenwald onstage, who ironically clutched an Oscar and revelled in the moment just two years after his own reckless charade at journalism caused one of the most appalling Oscar controversies of all time. Greenwald notoriously assassinated Kathryn Bigelow’s Zero Dark Thirty by putting the film in the crosshairs at The Guardian, erroneously arguing that the film was pro-torture. The uproar in response to his piece stalled the Zero Dark Thirty’s momentum and tainted the frontrunner as it went into wide release when Greenwald himself actually admitted that he hadn’t even seen the film. The man embodies the very worst of Oscar campaign ugliness, and seeing him on stage at the Oscars was one of the lowest points not just for the night, but for Oscar history. 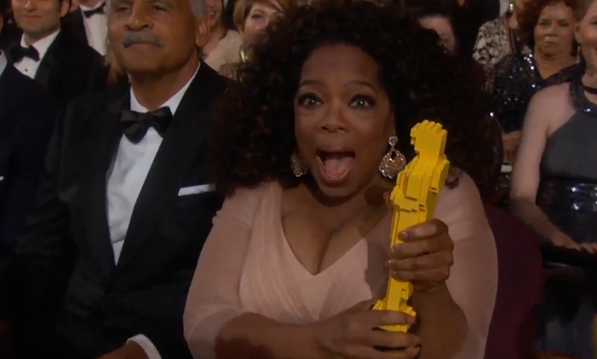 Cutest shot of the night!

Forget “Poker Face”! The Oscars were alive with the sound of music! Pop sensation Lady Gaga showed a wholly unexpected side of herself with her classically-trained pipes as she belted out a medley of songs to mark the fiftieth anniversary of Best Picture winner The Sound of Music. It’s too bad that the segment came so late in the evening, but Julie Andrews’ genuine reaction to Lady Gaga’s performance alone made it a special night.

Julie Andrews upstaged everyone by pronouncing “Budapest” correctly while presenting the Oscar that has long eluded Grand Budapest Hotel composer Alexandre Desplat. Desplat went into the show with his seventh and eighth nominations (he was also up for The Imitation Game) and thankfully didn’t cancel himself out. Now can Roger Deakins please win next year?

The showstopper of the night, however, was the performance of the Oscar winning song “Glory” by Common and John Legend. Powerful, stirring, and grand, the song brought the emotional scope of Selma to show. How many Oscar performances have brought that many stars to tears? This performance made their speech, which, like 'Glory', tied Selma to contemporary race relations in America, made the moment doubly relevant.

I’ve said it already, but it was so exciting to see such a maverick work take home Best Picture. Well done, Academy!

★Eddie Redmayne, The Theory of Everything

High: the picks for the Best Dressed


Laura Dern: Great in grey even if she didn't get the gold.

Jennifer Aniston, being a real sport.

Naomi Watts in what appears to be a sexy apron.

What were your favourite moments of the night?