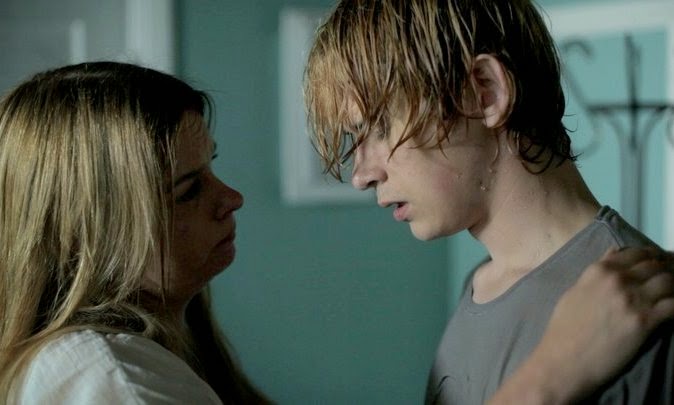 Okay, kids, calm down. The Good Son isn’t some Nordic remake of that 1990s thriller starring Macaulay Culkin as some sinister Damien. There are ample parallels between this Good Son and that Good Son, but this Finnish dramedy about a troubled teen takes a far more successfully humorous approach to spoiled brats. (Arguments can be made about the Culkin film, but comedy arguably isn’t among its intentions.) This black comedy from Zaida Bergroth screens at Bright Nights: The Baltic-Nordic Film Festival this Friday and it provides a spot-on example of the current of dark humour rippling throughout the festival.


Moody humour like this inevitably falls under the love-it-or-leave strain of moviegoing, but film buffs interested in a fun, challenging, and unexpected character study are bound to find themselves enrapt with the incisive character of The Good Son. The film is a no-holds-barred satire of showbiz life and the senses of privilege and entitlement that come with it as saucy leading lady Leila (Elina Nilhtilä) buggers off from her own film premiere and retreats to the family cottage with her two sons in tow. The controversy behind Leila’s latest gaffe isn’t made entirely clear with The Good Son’s jump into the family getaway. Leila is simply at a roadside diner when a voyeur snaps a picture with his phone and hides behind a tabloid that teases an embarrassing premiere for Leila and a train wreck of a performance in her latest film.

Leila handles the intrusion relatively well for someone looking to avoid detection at such an embarrassing time. A few cuss words and that’s that, but then a young man slides into the booth with the amateur paparazzo. The boy admires the new iPhone and then dunks it cheekily into the man’s full glass of water. That boy is Ilmari (Samuli Niittymäki) and he simply serves to protect his other, albeit in a misguided and somewhat obnoxiously funny way. Boys will be boys.

But therein lays Ilamri’s problem: he’s well on his way to being a full grown man, and he should know better that being a douchebag to another douchebag doesn’t solve anything. It’s one of those “an eye for an eye makes the whole world blind” lessons that Leila should have taught him ages ago. Leila, however, isn’t really the parenting type—playing the mom seems to be her least favourite role—and she treats Ilmari more as a companion/intern/smoking buddy than as a son. It’s no wonder that he’s so spoiled and testy.

There’s an elusive closeness to Leila and Ilmari’s relationship, although it’s nothing of the Bates Motel/Savage Grace variety no matter how weirdly platonically sexual it seems. Things quickly go out of control when Leila invites a bunch of her actor/arty friends up to the cottage for a boozy weekend. It all seems wholly inappropriate for a weekend with one’s kids (although it seems relatively harmless compared to the parties in Latvia’s The Lesson) from the minute that Leila’s friends pull up halfway in the bag already and sporting bottles of vino. One reveler even rolls out of the back seat of a car stone cold drunk and buck naked. He passes out on the front lawn, and Leila and company treat the arrival as a perfectly ordinary party favour. It’s in this moment where everyone stands around, happily ignoring the drunk party animal parked ass-up and intoxicated on the ground that The Good Son deftly brings its wicked sense of humour to light: things aren’t going to go well at this party and everyone is far too blinded by their egos and self-indulgence to realize the mess before their very eyes.

The party goes well-ish with Leila giving Ilmari the motherly advice of knocking out one of the insufferable party guests with double gin and tonics, but the clash of egos between Leila and her fellow actress is nothing compared to the next round of party games. As the weekend progresses, Leila strikes up a relationship with a writer named Aimo (Eero Aho). She insists that it’s just sex, but Ilmari immediately acts as if he’s threatened by this shift in his mother’s attention. Things spiral out of control no sooner than one can say “Oedipus Rex.”

Director/co-writer Zaida Bergroth has lots of fun colliding the overtones of Greek tragedy within the framework of a midsummer night’s sex comedy. Anxiety looms at every turn as Ilmari and Aimo butt heads like two territorial bucks. (It doesn’t help, either, that Ilmari’s summer fling, Karita, played by Anna Paavilainen, is rumored to be the village bicycle and invites Aimo to take a spin during a reprieve from one of the mother-son domestic squabbles.) The Good Son wracks up ample tension as it layers one perversely droll scenario on top of another: summer love has never been so awkward, and there’s an underlying wickedness to the grossly incestuous vibe wafting in the air. Only Unto (Eetu Julin), Leila's youngest and most neglected son, seems to have any innocence and perspective as he documents the weekend through his camera and uses make-believe to escape from the palpably negative energy of the circus that Leila and Ilmari are brewing for their own misguided amusement. Bergroth and the cast, especially Nilhtilä (who manages to be wholly sympathetic while Leila threatens to steal Betty Draper’s title of “Mother of the Year”), handle it extremely well by putting the audience’s discomfort with this wayward household at the centre of the film’s comedic edge.

The mostly handheld cinematography adds a dynamic of off-kilter edginess, and Bergroth gradually darkens the film aesthetically as the tone of the humour becomes increasingly ominous. Laugh to release the tension as The Good Son grows darker as it delves deeper into absurdity and farce. The film unfolds with the pace of a thriller even though it’s very much a comedy, and the eruption of that one doesn’t see coming brings the film to an unexpected ending, if a tragically, amusingly, and satisfyingly fitting one. The cocktail of unease and mirth, and of tragedy and comedy, keeps the audience at a distance from getting a handle on Ilmari’s violent instability until, like Leila, we see it coming far too late.

The Good Son screens in Ottawa at Bright Nights on
Friday, Feb. 13 at 7:00 pm at the River Building Theatre, Carleton University.

Friendly reminder that there’s free parking at Brewer Park and it's just a quick walk away! (Directions)