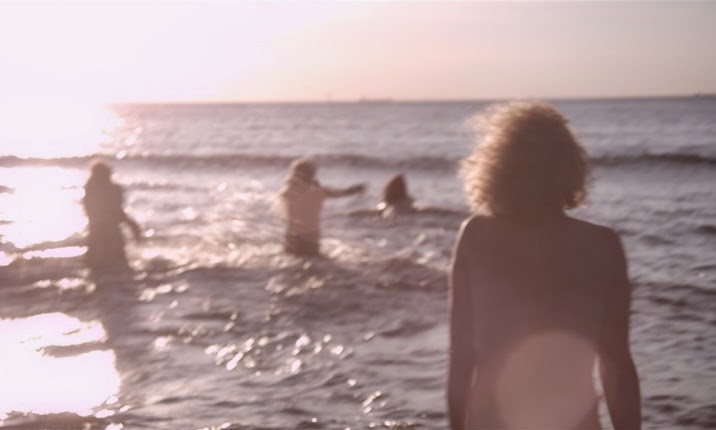 Bright Nights: The Baltic-Nordic Film Festival kicked off its fifth year with the opening night presentation of Latvia’s box office hit The Lesson. The Lesson, which looked great on the new DCP projection at the River Building Theatre at Carleton University (the CFI’s new home for 2015), marks an edgier offering for Bright Nights, but a strong one too. There’s a lot to grapple with in this engaging and highly debatable film that invites moviegoers to confront questions of morality, propriety, and modesty, but also elements of storytelling and filmmaking that bridge art and life. The Lesson marks a provocative and stimulating start for the festival.

The Lesson stars a strong Inga Alsina-Lasmane (whom festivalgoers might recall from the past European Union Film Festival selection Dream Team 1935) as Zane, a teacher beginning her first assignment. Zane receives a hard blow on the morning of her first class when she learns that her boyfriend is having an affair, and the turn of events seems to put Zane in an unusual headspace as she tries to win the respect of her students. The film’s almost imperceptibly in tune with its protagonist’s fragile psychology from the outset, which makes it difficult to judge Zane’s actions when they far exceed the point of no return.

Zane’s pupils are an unruly bunch when she makes her first attempt to assume authority over the teenagers taking her Russian language and literature class as an elective. They’re boisterous and inattentive, unconcerned for either her authority or their grades, and Zane tries her best to reign them in by offering old-fashioned tactics like treats as positive reinforcement and or forging ahead with a half-empty classroom.

Zane’s other role, however, is to mentor these students. She clearly wants them to do well and she wants them to like her even more, so she tries the unorthodox method of playing by their game to win their respect. If you can’t beat ’em, join ’em, right? Well, this route doesn’t sit too well with some of the other faculty since Zane earns the admiration of her students by taking them on a field trip that amounts to a booze-fuelled party on the beach.

Common sense suggests that Zane should probably know better: chugging vodka with one’s students might be one way to get them to appreciate Russian culture, but it’s probably not what parents and staff have in mind when they permit the event. Ditto a bit of joyriding, skinny dipping (between teacher and students, no less), plus some inevitable whoopee going on between the kids when they’re supposed to be brushing up on their language skills. Director Andris Gauja handles the questionable behavior of Zane and her students quite tastefully by presenting it innocently and fleetingly: the images and actions pass by so quickly that it’s hard to feel any black-and-white impropriety with their actions—the skinny dipping scene, for example, is lit so beautifully that it conveys the air of young freedom and abandon more prominently than the nude bodies of Zane and her students. The camaraderie between Zane and the students, similarly, defines these moments just as palpably as the indecency of Zane’s behavior does, so The Lesson invites the audience to admire Zane’s attempt to win over her students at the same time that it asks viewers if is too naïve for her own good.

Gauja and co-writer Lauris Gundars have Zane’s inexperience in mind as they wade her deeper and deeper into scenarios in which an authority figure like herself should clearly know better, but a viewer can also appreciate that a younger and more ambitious upstart like Zane might also be keen to shake up the system and try new things. (The schools also seem far more liberal in Latvia than they are in no-fun Canada.) The Lesson gradually puts Zane in way over her head as her interest in her students, particularly her interest in her outgoing male student Max (Marcis Klatenbergs), takes her beyond propriety and common sense. It starts with a look and then grows into a flirt, and then a deeper conversation alone from the group when the teacher invites the students over for New Year’s. Nothing happens and Zane does her best to keep her relationship professional (using the term relatively) and emphasizes to Max that her relationship is with the class and cannot be with any one particular student. At the same time, The Lesson builds a parallel thread with Zane’s relationship with a fellow teacher and his young son with whom Zane acts perfectly decently—or, as an adult should with any minor whether he be six or sixteen.

It then goes too far, though, when Zane becomes comfortable with her relationship with her students and her sense of how far the school’s administration will tolerate her liberal teaching methods. The problem compounds itself with the fact that it violates the one most genuine bit of good that Zane performs by being a friend to her students in addition to their teacher, for she takes one girl, Inta (Ieva Apine), into her home to escape her abusive father, and if there’s one thing that Zane should have learned about Into during her stay, it’s that Inta likes Max. The affair spirals out of control as abruptly and quickly as it begins as Zane’s naïve hold on her students’ trust underestimates the emotions of directionless adolescents.

The Lesson draws a complicated moral fable out of Zane’s desire to command authority and succeed as a teacher, friend, and lover alike. The film becomes very interesting by looking at Zane’s poor decisions through the filter of betrayal, rather than illegality or immorality. Does her sisterhood with Inta change Zane’s relationship with the students as a whole? Is Zane’s biggest error violating the trust of her students by becoming intimate with Max? Does she err by favouring one student above the rest?

The kitchen-sink aesthetic of Gauja’s direction, which feels a bit like Dangerous Minds à la Dardennes, makes The Lesson amply resonant as puts the audience in a tangibly real and authentic teacher-student relationship. Alsina’s brave performance is consistently enigmatic—just what on earth is this young teacher thinking?—and the performances by the young cast members, many of whom are acting in their first roles, are impressive. If the onscreen action in The Lesson ever feels too indecent, it’s because Gauja creates such a convincing window into reality. The film provokes questions pertaining to contemporary sexual attitudes and youthful innocence for a generation of students for whom codes of decorum and common sense find their filters through online presence and media saturation—note how often one of Zane’s students holds a camera or phone to capture the moment. The Lesson asks some provocative questions without affording easy answers, and while it’s bound to make some viewers uncomfortable, The Lesson offers a challenging drama that should have audiences talking long after the final credits roll.