“I’ve never lived in a small town, but I’ve always loved that you get such a sense of the community when you pick up a small town newspaper,” says director Daniel Perlmutter. “You feel like you are reading about the people around you, rather than bigger issues, which are also important, but there’s something about really reading about your neighbours and your friends that can bring a community together. That’s an experience that you don’t really have in the city.” Perlmutter’s upcoming film Big News from Grand Rock finds an unlikely underdog story in the offbeat tale of one lone editor’s creative quest to save his fledgling newspaper in the fictional Canadian town of Grand Rock, Ontario. Perlmutter and Grand Rock star Ennis Esmer, who plays the in-over-his-head editor Leonard, joined me in a chat over the phone to talk about their new film, which opens in Canadian theatres February 27. The hilarious duo makes some great observations about the creature comforts of community newspapers and, as a cottager reared on stories about homemade pickles and columnists waving down Canada Post on the highway to get said pickle stories delivered to the pages of The Pontiac Equity, I think the duo’s points resonate as much as the slice-of-life humour does in Leonard’s befuddled quest in Big News from Grand Rock.


Grand Rock hits theatres after touring smaller towns with the Toronto International Film Festival’s Film Circuit, and audiences have been embracing the final product just as warmly as the town of Midland, Ontario did during the shoot. The director and star note that it’s been lots of fun sharing Grand Rock with audiences who appreciate the way  the film captures the pace and rhythm of small town life. “The other funny that’s been happening,” Perlmutter adds, “is that  journalists and reporters... have been coming up and saying how much they appreciate the fact that we’re telling this story, although they always point out that there’s no way that a small town newspaper could afford that many reporters.”

“Oh, really? Four is too many?” I ask, guestimating the number of reporters who fill the pages of The Equity. (Three-ish is their total, just one shy of the team is Grand Rock, although a few residents of local townships send in weekly columns listing who died, visited, or won at bridge.)

Anyone who enjoys the nostalgia afforded by the local paper is bound to see some aspect of themselves in the plight of the folks in Grand Rock. This comedy puts the community glue of local paper at its heart and, ironically (or appropriately) enough, Perlmutter says that the loss looming over the Grand Rock Weekly Ledger found an unexpected echo during its shoot. The film, Perlmutter says, came to Midland just when the town lost its own paper that had brought headlines to the community for a hundred years. “They really felt the loss,” Perlmutter says when asked how Grand Rock tackles the community spirit embodied in the local paper, “and so that was a major part in it.”

It’s no surprise, then, that Midland rallied behind the opportunity play the part of Grand Rock. Perlmutter recalls stumbling upon Midland in the midst of his search for a location to serve as the fictional Grand Rock and finding the size and atmosphere of the town far more appealing than shooting in a studio or around Toronto. The chance of securing Midland even mirrors the authenticity of the film’s small town character, for the director recalls pitching Midland its first chance to host a film shoot just the day before the town council convened for one of its town meetings, not unlike those seen in the film, where the town voted in favour of taking the role.

The authentic community spirit of Midland comes to life in no small part thanks to the active participation of the townspeople. “We held auditions in Midland for some of the smaller parts,” Perlmutter says, “and basically the whole town came out. I wish we could have cast another hundred parts, we had so many great performers come out and people who had never acted before. It just gives it that feeling of life in a small town. There’s even a slight accent even though the town is just an hour north of Toronto.” Big News from Grand Rock is a fine ensemble film (it co-stars notable Canuck stars like Gordon Pinsent, Kristin Booth, Aaron Ashmore, and Leah Pinsent), but the best performance arguably comes from Midland itself as the jovially relatable town as the local players fit seamlessly with the professional comics and sunny tone of the film. 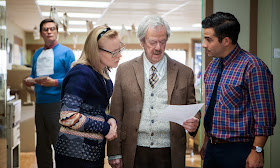 A film like Big News from Grand Rock couldn’t play out in a big city, since the enjoyable folly of Leonard’s attempt to save the town puts him in over his head as he rents films from the local video store and embellishes their stories as news items for the Ledger. (The film was inspired in part by Hayden Christensen’s character in the 2003 drama Shattered Glass.) “There’s an activist element to it,” Esmer argues as he and Perlmutter elaborate on how the comedy works as a finely contained farce in the small town, as opposed to the big city. “This would be a relatively minor issue in a big city, but in a small town, the whole town is up in arms about it,” adds Perlmutter. To give the problem a sense of scale, the film features a recurring gag with an aggrieved townie (Art Hindle) who constantly reminds Leonard that the broken pothole on Main Street is the town’s greatest worry. This seemingly minor character, Esmer adds, “is driving the whole thing forward by constantly bringing up the pothole, which seems like a minute concern, but unless you’re from a small town and you have that kind of accessibility (people talk about writing a letter to your mister of Parliament to get things done, and this changed, and it just seems so daunting), but in a small town, you can actually effect change in that way.” Not only does the running bit sustain itself as Leonard spews fiction onto the pages of the Ledger, Hindle’s character mirror Leonard in a way by showing how even the smallest of voices has a large impact.

Leonard, whom audiences might identity as a man who’s half George Bailey from It’s a Wonderful Life and half Murray French from The Grand Seduction, offers a rambunctious opportunity for Esmer to bring to life a kind of classic comedy that’s an increasingly rare presence on the screen. The actor praises Perlmutter's “openness and malleability” during the process of making Big News from Grand Rock. “I think at the beginning Leonard was a bit more dim and not as verbose,” he says, “my energy is a bit more animated than that, so we took Leonard as the kind of guy who just can’t stop talking. He just digs holes and keeps digging more and more and more.”

Esmer’s likable performance draws on Leonard’s endless earnestness as the character embellishes his fish story about a conspiracy at the local hospital, which grows greater and greater in hyperbole as his choices from the video store become more extreme. “I’m definitely familiar with lying,” he jokes while observing that acting is really just an extension of lying, much like Leonard discovers as he goes to greater dramatic lengths to contain his lie, “which made it easy to access Leonard’s character process.”
Leonard learns the idiosyncrasies of journalism as his story attracts the attention of big city reporter named Lucy, played by Meredith MacNeill (“Peep Show”), and Grand Rock finds a funny harmony in the culture clashes of big city news media and small town journalism that accentuate Leonard’s anti-hero appeal. “You see it in those scenes where Lucy comes to town,” says Esmer, “and he just keeps making things worse, and she’s not buying it and he thinks it’s working, and so there’s a certain naïveté to Leonard. He doesn’t really get the consequences of what he’s doing until it all falls apart.”

The city-country contrast between Leonard and Lucy finds inspiration from the roots of Canadian comedy, and Big News from Grand Rock couldn’t hit theatres at a better time than when the big city/small town divide is offering a popular and critical hit in the Canadian comedy series “Schitt’s Creek.” Fans of the hilarious Eugene Levy and Catherine O’Hara show seem tailor-made for the throwback humour of Grand Rock. “How could you connect us with such talented wonderful people? I detest the very notion,” Esmer jokes as I suggest that Big News from Grand Rock feels comfortably at home in a family with the popular show. But both Big News from Grand Rock and “Schitt’s Creek” have something else in common: namely, they’re successful hits in a genre that sometimes eludes Canadian filmmakers. They’re both warmly relatable and extremely funny, and it probably isn’t a coincidence that both are connecting with audiences in today’s increasingly over-connected culture.

Levy himself even has a hand in the development of Big News from Grand Rock, for he selected Perlmutter as a candidate for a year of mentorship during the film’s participation in the Canadian Film Centre’s Comedy Lab with Just for Labs, where Levy and comedy greats like David Frankel (Hope Springs, The Devil Wears Prada) and Daniel Goldberg (The Hangover) offered a wide variety of feedback and expertise.

“For me,” Perlmutter says after I mention “Schitt’s Creek,” “I loved that kind of TV growing up. To bring it back to Eugene Levy, his Bobby Bittman was one of his characters on “SCTV,” and one of my favourite episodes was when he retires and goes off to live in the country, and there’s always been something funny to me about the city person who goes to the country. So there’s a hint of that with Lucy’s character, like when she butts up against small town life. In fact, in an early draft of the script, there was a scene where we see her in the city with a scene with her editor warning her how things work differently in the small towns.”
Even though the driven and plugged-in Lucy hails from out of town, the temporary foil jives perfectly with Leonard as she too becomes swept up in Leonard’s lie and, in turn, the charm of Grand Rock. “There’s still something that feels old fashioned from her,” Perlmutter says, “and I think that’s more to do with the tome of the movie in general: A throwback to an old-fashioned comedy dynamic, especially between her and Ennis.”

As Leonard and Lucy run deeper with the mystery and as romance peppers the investigation explored by this pair of Tracy/Hepburn foils, film buffs will love the nods to contemporary comedy classics (well, not “classics” per se, but forgotten gems) that arise as Leonard mines the resources of the local video store. Films like Larger than Life, Multiplicity, The Cutting Edge, and Extreme Measures fuel the farce of Leonard’s fictional scoops with the help of the clerk (Aaron Ashmore), and the selections for Leonard’s inspiration are a novelty for cinephiles. They’re also right at home in the small town flavour of the film, since, as Perlmutter explains, the film choices have to work with the small town feel. Movies, he says, “that were along the lines of what Big News from Grand Rock is... the kind of movie that doesn’t really exist anymore.” Whether Big News from Grand Rock takes audiences to a setting they don’t see often enough or brings a welcome return to a classic era, there’s no denying that the film is already a hit going into its theatrical release.

Big News from Grand Rock opens in theatres Feb. 27.
It screens in Ottawa at Landmark Kanata.