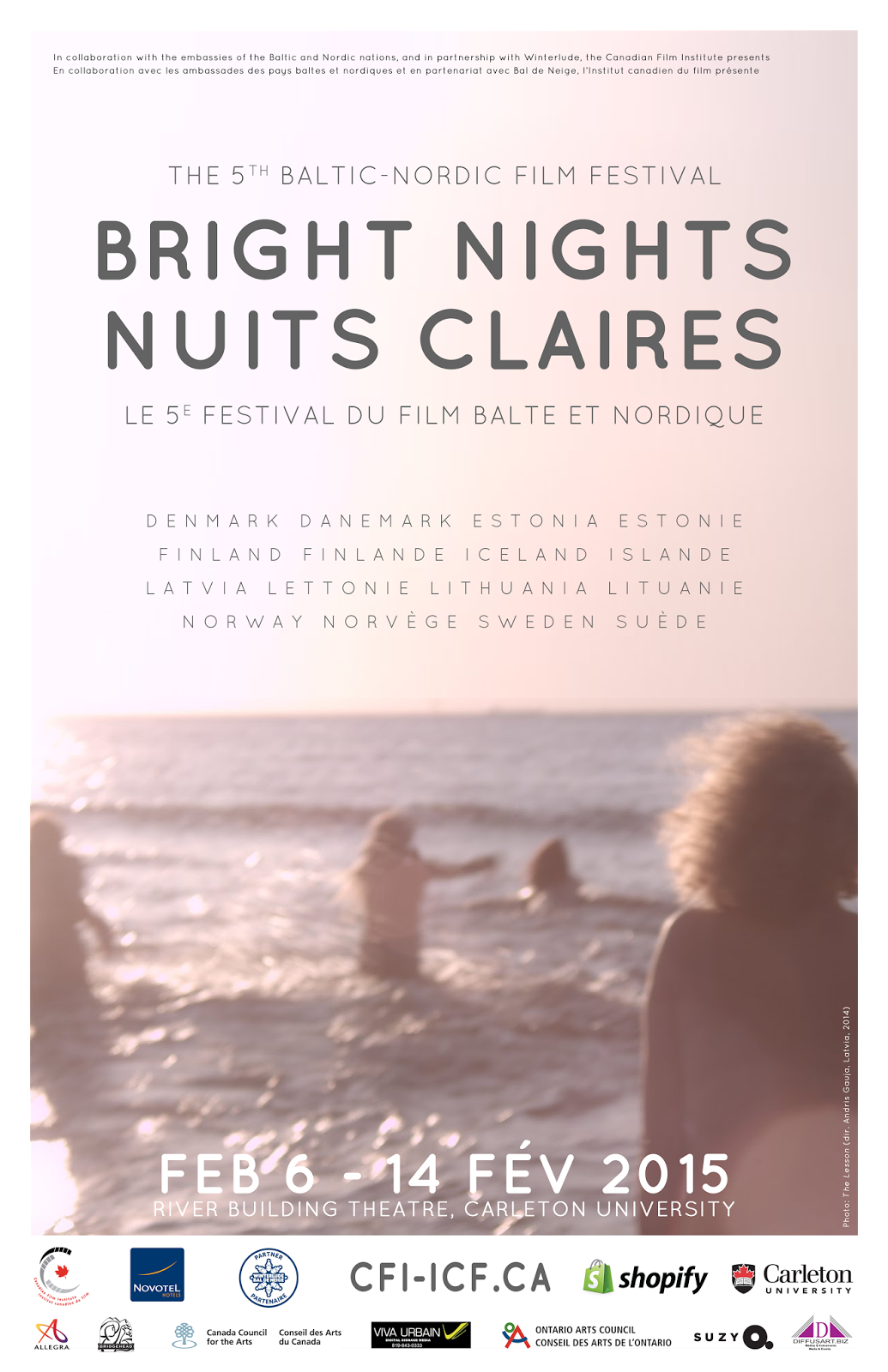 Don’t let all this snow put a chill in your spirit: I see Bright Nights ahead in the forecast. Local film buffs should take note of a cinematic destination as they lace up their skates for Winterlude this week and look for some indoor events to mix with the outdoor fun. The Canadian Film Institute’s Bright Nights: Baltic Nordic Film Festival moves to the River Building at Carleton University in its fifth year, which makes the annual winter film festival a great extension along one’s skate down to Dow’s Lake on the Rideau Canal.

Bright Nights officially begins Friday, February 6, but festivities kicked off at a media launch at Club SAW in Arts Court last Tuesday. (Which unfortunately coincided with the death of my laptop, so please accept my apologies on this delayed post!) The eight films ahead will surely warm my spirits just as much as the Bridgehead coffee and SuzyQ donuts did at the event. CFI Executive Director Tom McSorley was ironically away in Sweden during Tuesday’s launch, but CFI Programmer Jerrett Zaroski hosted the bundle of film fans, media types, and Embassy delegates milling about with coffee and donuts. Bright Nights, as Zaroski noted while opening the proceedings, offers a great festival partnership for Winterlude given the similarly snowy landscapes between Ottawa and the seven Baltic-Nordic countries represented in the festival. (Bright Nights presents films from Denmark, Estonia, Finland, Iceland, Latvia, Lithuania, Norway, and Sweden.) The Bright Nights/Winterlude connection feels especially strong this year given the overall trend of dark humour that connects many of the films presented at the festival this year within a larger trend of independent films made here in Canada. Ottawa filmgoers can easily see this comedic edge to recent Baltic-Nordic films screened in town, such as two of the hits from 2014’s European Union Film Festival, Latvia’s Rocks in My Pockets and the immensely popular Force Majeure, as well as the Finnish duo of Road North and My Stuff, which screened at previous CFI festivals.
The darkly funny current within this year’s festival makes the edgier and riskier slate of films in the impressive line-up more easily accessible to serious and casual filmgoers alike. The festival opens with Latvia’s acclaimed film The Lesson from director Andris Gauja, which comes to Ottawa after premiering at Montreal’s World Film Festival. The Hollywood Reporter calls the film “an impressively mature character study with commendably global ambitions,” while praising Gauja’s background in documentary for injecting his dramatic directorial debut with naturalism and emotional authenticity. Other notable entries include Norway’s I am Yours, which the country selected as its Official Selection in the Best Foreign Language Film race for last year’s Academy Awards, as it brings “Game of Thrones” star Amrita Acharia into a story of an aspiring actress at a cultural crossroads when a chance encounter with a Swedish filmmaker alters her fate, while Finland’s multi-award-winning The Good Son also brings a darkly satirical look at the film industry.

Sweden’s greatest filmmaker, Ingmar Bergman, offers the subject for Sweden’s Bright Nights entry Trespassing Bergman, a documentary chronicling the prolific filmmaker’s influence on the cinema featuring interviews with directors such as Woody Allen, Michael Haneke, and Birdman’s Alejandro González Iñarritu. Denmark’s The Hour of the Lynx brings some familiar faces for fans of Scandinavian film, for it stars Sofia Gråbøl of the original “The Killing” and Frederik Christian Johansen from the Oscar-nominee A Royal Affair. Estonian film, on the other hand, is in the spotlight this year with the country’s Oscar nomination for Tangerines and anyone interested in discovering one of the most interesting national cinema’s should undoubtedly check out Cherry Tobacco. Finally, the contemporary seeps into the festival with the addition of the Icelandic doc Ash about the 2010 volcanic eruption that made headlines around the world, while history itself appears within the ambitious Lithuanian drama The Excursionist. All films at Bright Nights are Ottawa theatrical premieres, and the festival offers passes for moviegoers hoping to enjoy all eight films along with their Beavertails during Winterlude.

This year’s line-up is as follows:

Dir. Andris Gauja | Lativia/Russia | 108 min.
Friday, Feb. 6 at 7:00pm
Synopsis: The Lesson tells the story of Zane, a devoted teacher mentoring the senior class in a Latvian high school. She tries to live her life in the most meaningful way possible. Even so, as for many younger teachers, it's hard for Zane to keep her distance from her class -- the students soon become a sort of family for her. When one of the students falls in love with her, she faces a stark choice between her personal happiness and the pressures of society.

Dir. Iram Haq | Norway | 100 min.
Saturday, Feb. 7 at 7:00pm
Synopsis: Mina is a young single mother living in Oslo with her 6 year old son Felix. She is a Norwegian Pakistani with a troublesome relationship with her family. Mina is constantly looking for love and has relations with different men, however, none of the relationships bearing any hope of lasting very long. So when Mina meets Jesper, a Swedish film director, she falls head over heels in love.

Dir. Audrius Jezenas | Lithuania | 110 min.
Sunday, Feb. 8 at 4:00pm
Synopsis: The story of a ten year old girl who escapes from a deportee train and goes on a 6000 km long journey back to her homeland.

The Hour of the Lynx (I lossens time)

Dir. Søren Kragh-Jacobsen | Denmark/Sweden | 100 min.
Friday, Feb. 13 at 9:00pm
Synopsis: Helen, who is a priest, is approached by scientist Lisbeth with a desperate plea for help. A young man, who has been sent to a high security psychiatric ward after having killed an old couple, has attempted suicide while rambling about God. In a race against time the two women begin a shocking journey deeper and deeper into the sick mind of a young man's soul.

Dir. Herbert Sveinbjörnsson | Iceland | 107 min.
Saturday, Feb. 14 at 4:00pm
Synopsis: The story of the families that live and work under Eyjafjallajokull volcano that erupted in 2010 grounding Europe leaving thousands of travelers camping out at airports.

Dir. Andres Maimik, Katrin Maimik | Estonia | 93 min.
Synopsis: Laura is a young girl living a boring life in a small provincial town. When her best friend asks her to come on a hiking trip, Laura readily agrees to shake off some of the ennui she feels.

See you at the festival!