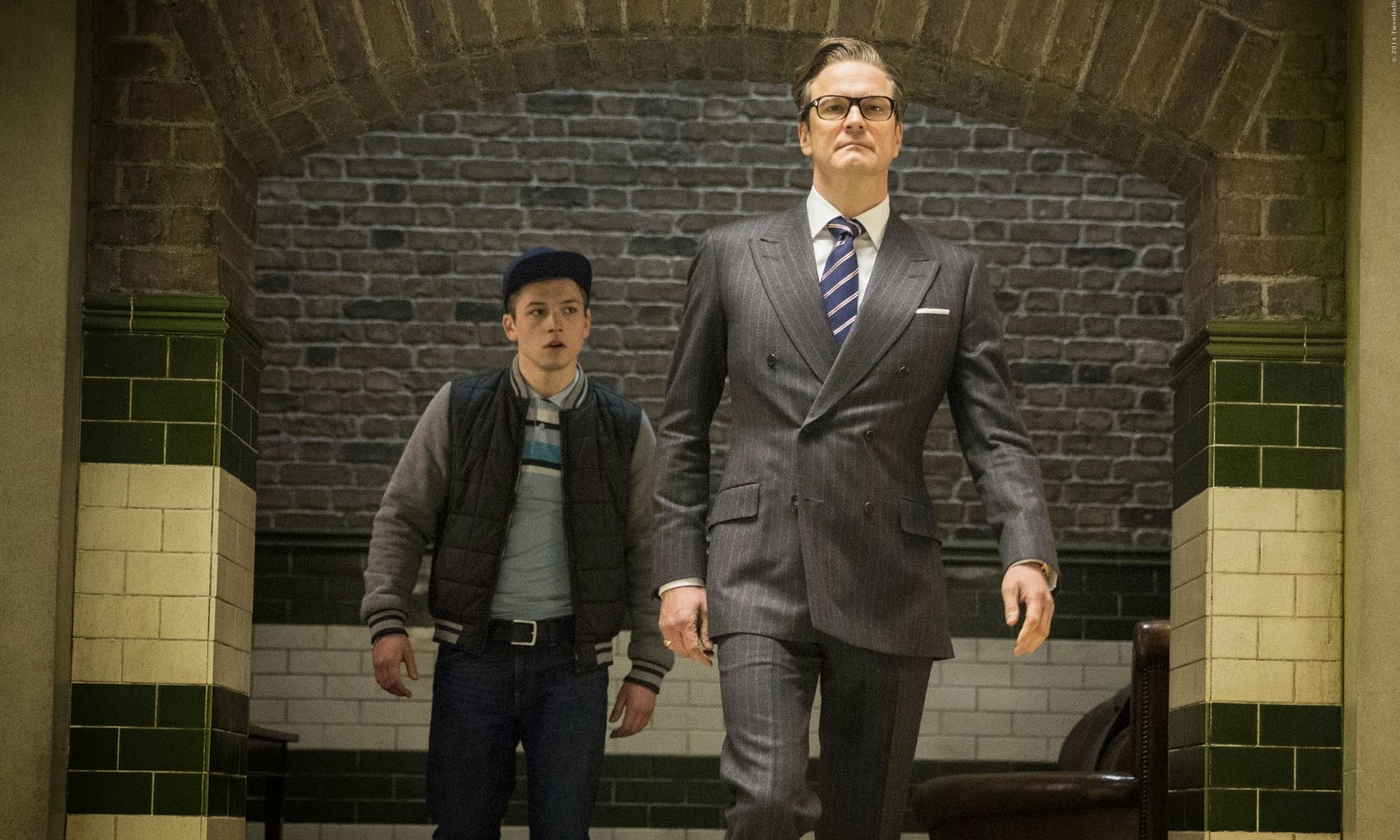 “The new ones are so serious,” says Harry Hart (Colin Firth) during a posh dinner of Big Macs and fries with Valentine (Samuel L. Jackson). Harry, a spy under the codename Galahad in the Knights of the Round Table-themed aliases of the British secret service organization the Kingsmen, discusses spy movies with the megalomaniac Valentine in one of the many tongue-in-cheek moments of the spy spoof Kingsman: The Secret Service. If Harry and Valentine aren’t fans of the stern Skyfall-era James Bond films, then they’re in good company with anyone who misses the days when espionage and realism didn’t go hand in hand. Kingsman is a raucous throwback to the Roger Moore era of spy cinema (re: James Bond in Space), and this fun, auctioned-packed farce is a riot.


Firth is rather debonair as the proper English gentleman Harry Hart, a nod to the caviar-eating Bond, but he’s also a keen reminder that manners take a man much further in the game than a good old-fashioned licence to kill does. Harry, forever indebted to the late Lancelot, the man who gave his life during a haywire mission, honours his bond like a proper knight. So, when the time comes to summon a new Kingsman to the round table, Harry defies his classist superior, Arthur (a well-cast Michael Caine), and recruits a London hooligan named Eggsy (Taron Egerton, who makes a promising leading man) to compete for the ranks of Kingsman. Eggsy’s father is the man to whom Harry owes his life, and this theme of service and honour leads both Harry and his protégé to prove that guts and heart outrank birth and class.

Kingsman brings a fair, if brisk, amount of exposition to the game as it adapts the comic book by Mark Millar and Dave Gibbons and lays out the web of James Bond parodies in a lengthy recruitment that pits Eggsy against candidates of better breeding. Kingsman isn’t Divergent-ly sluggish with its build-up, since it mounts the concurrent plot with Valentine’s plan to rule the world alongside Eggsy’s mission to prove his candidacy, and director Matthew Vaughn (Layer Cake, X-Men: First Class) keeps both the action and the character development concise and punchy. Vaughn stages many intense action sequences, and the most riveting of them are among Eggsy’s haywire recruitment process, so the film consistently makes its characters compelling as it dives into showier setpieces. It’s a nimble action comedy that cleverly explores class and privilege that divide and define Britain in spite of its well-mannered secret agents of the cinema.

Firth and Egerton are a fun pair of opposites and make Kingsman a mismatched buddy comedy as much as it is a shrew spy spoof. Firth, talking proper and drinking with his pinky out, plays perfectly to his manner and dry humour—he’s funny because he plays Kingsman so straight and dignified—while Egerton, colloquial and laid-back, is a likable everyman for the young directionless target audience. A Henry Higgins and Eliza Doolittle combo, they are, if Eliza wields a gun like a mo-fo instead of singing a tune, and Kingsman even lets Eggsy drop one My Fair Lady reference amidst a plethora of nods to contemporary spy flicks so that the audience knows there is more to this boy than slang and a track suit.

Kingsman is enjoyably self-referential from beginning to end and it (thankfully) never takes itself seriously as it infuses high stakes espionage with Marvel movie escapism. It’s a spy movie for people who love spy movies, fully informed with nods and winks from everything Goldfinger to Goldmember, with its pithy one-liners, scenic locals, extravagant plots, and cool gadgets provided by an amusing Mark Strong as Merlin, Kingsman’s Q. Vaughn smartly blends old-school character with contemporary sensibility, taking the self-awareness of this covert game both as homage and as something new, as the film plays into the smorgasbord of comic book movies proliferating the screen while also screaming ‘Enough already!’ as it zings recycled genre bits that have been revamped and rebooted ad nauseam.

Kingsman also feels very much a film of the moment since audiences haven’t really seen a fashionable spy movie aimed squarely at the premium screen overkill that increasingly defines mainstream entertainment. Even Austin Powers appeals to an audience beyond teenage boys and male film geeks, but Kingsman almost overdoes its cartoonishness to the point where it becomes a victim of its own joke. The violence, for example, is so outrageously extreme that it’s equally ludicrous and hideous. One pivotal bloodbath in a church is the looniest example of self-referentially glorified violence to hit the screen in years—imagine the lobby shootout from The Matrix done in a Shaun of the Dead like lampoon—and it’s both so farfetched and grandiose that it can’t help but be hilarious for its extremity, but it also finds its appeal in being so stylish and electric that it inevitably glorifies violence far worse than do many of the films it deconstructs. Kingsman thus forgets Harry’s advice that “manners maketh man” as its silliness gets the better of itself to the point that the film goes from being smart to juvenile.

The same dynamic goes for Samuel L. Jackson’s hilarious baddie, who is the antithesis of a suave Bond villain with his askew ball cap and childish lisp, and Valentine’s henchwoman Gazelle (Sofia Boutella), who slices and dices her foes with her acrobatics and razor-sharps prostheses. They are both comically unconventional for spy movie villains, but are awkwardly defined by their impediments. Firth, finally, is a great fit for the part, yet seeing him in a comic book movie brings a hint of defeat that might fuel a great sequel for Birdman: did they really get the guy from The King’s Speech too? Firth and Jackson always look like they’re enjoying the film for more than the sizable paycheck it offers, though, so Kingman remains fun for all of its ridiculously over-the-top and action-packed 129 minutes. It’s good to be in on the joke, isn’t it Mr. Bond?

How much did you enjoy Kingsman’s spy game?