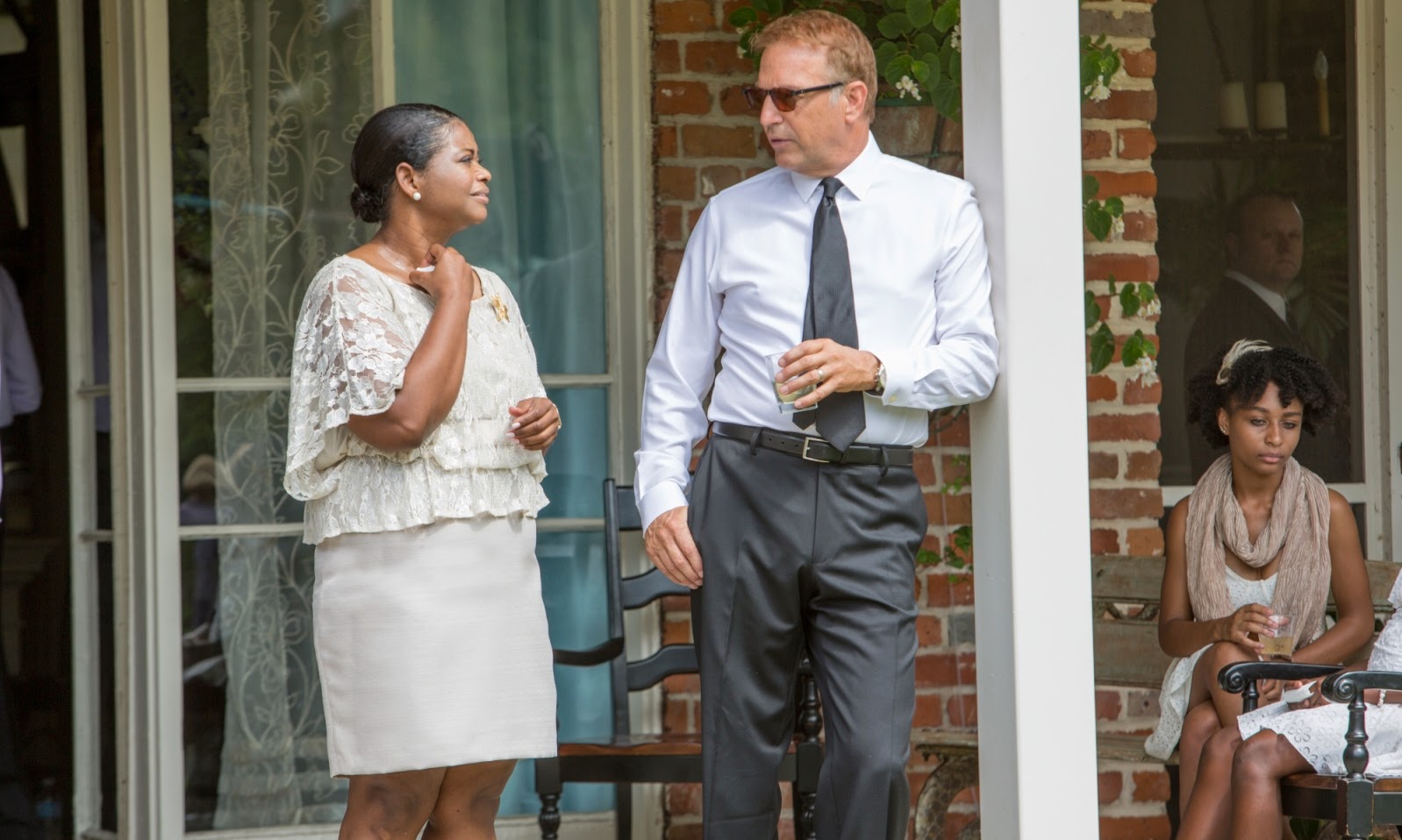 'I'm just mildly flawed,' Elliott Anderson (Kevin Costner) offers in his defense as he sits in the witness stand during the proceedings of Black or White. Elliott faces a charge of racism as he fights to keep sole custody of his granddaughter, Eloise (Jillian Estell), following the unexpected death of his wife and her grandmother (Jennifer Ehle, a bit too young to be playing a grandmother). The pickle of Elliott's case is that he stands as the remaining family on the Anderson side of the family (Eloise's mother died during childbirth) and he still blames Reggie (André Holland), Eloise's absentee drug addict father--correction, Eloise's black absentee drug addict father--for her death.


Race inevitably fuels this emotionally charged bit of family law as Elliott defends himself in a custody battle with Reggie and his mother, Rowena (Octavia Spencer), whom Eloise lovingly dubs Grandma WeeWee, and he refuses to let race be a factor for determining which family gets the right to raise their biracial granddaughter. Racism, Elliott submits, isn’t some all-encompassing catch-all, and it’s unfair to both Eloise and her family to define her as either strictly black or strictly white. This new film from Mike Binder (The Upside of Anger) admirably tackles complex issues of race that need to be confronted. Like many articulations of race-relations in today’s supposedly post-racial age, Black or White occasionally struggles to escape the same dynamics it explores, but one simply needs to borrow the adage from Elliot that it’s just mildly flawed and appreciate the strengths of the larger picture that far outshine the blemishes.

Black or White, for example, offers one problematic representation of race for every authentic character it presents. Eloise’s math tutor Duvan (Mpho Koaho) is a hilariously overqualified immigrant who presents an academic publication for every odd scenario that arises in the story, and the running bit inadvertently connects Duvan’s affluence with his race as a farcical counterpoint to the comparatively coarser Jeffers family, although Koaho gives a drolly likable performance that redeems the character with his strength and dignity. Similarly, the trial brings a duel of sassy black women as Rowena and the judge (Paula Newsome) have frequent stare downs for comedic relief. On the other hand, Black and White offers a same sex couple in the Jeffers family nonchalantly, for Reggie simply refers to his sister and her wife, both of whom are present throughout the duration of the trial, and the film opts not to make a spectacle of labeling the characters, but rather simply lets them be. Eloise, finally, is a cute innocent, and the film offers a family-friendly alternative to the same dilemma that faces Sam White (Tessa Thompson) in Dear White People, as both she and Eloise find themselves caught between two racial identities that society seems to deem incompatible. The only real difference between Sam and Eloise is that the latter grows up without much concern for the difference in skin colours that seemingly differentiate her from her granddaddy.

Black or White brings an earnestness to the discussion of race that makes it a candidly accessible dramatization of post-racial families. The film doesn’t have the same confrontational oomph as, say, Dear White People or Selma (it’s more The Help than Do the Right Thing), but it deserves as much consideration since it smartly tackles the awkwardly unapproachable questions that broadly underlie debates of racial equality. As Grandma WeeWee’s brother and lawyer Jeremiah (Anthony Mackie) puts Elliot’s alleged racial prejudice at the forefront of the case, Binder lets the familial drama of Black or White directly confront the unspoken prejudices that permeate the conversation. Introducing the question of race, for example, doesn’t inherently liken itself to playing the race card. Alternatively, Elliot’s dislike for one reckless man doesn’t inherently qualify him as a racist, but it does force the audience to ask if Elliot’s grief would be any different if his daughter ran off with some affluent white guy instead of a black crack addict. The film essentially puts on trial one’s own conceptions about race and see the futility in seeing anything as simply black or white, and instead look to the strong family values shared by both the Andersons and the Jeffers.

The film really comes to life with the complexity of Costner’s Elliot, who offers the audience the most complex and fallible character of the ensemble. Costner gives one of the best performances of his career in Black or White (it’s certainly his best work since teaming up with Binder and Joan Allen in The Upside of Anger.) His cantankerous, curmudgeonly, and hard-drinking Elliot is proudly a member of the Old Boys’ Club—the man has a distinct whiff of the upper crust of America that seems content to let things be and keep the status quo, since confronting the inequalities in society forces them to acknowledge the deficiencies in their own lives—and he equally defines the man by his flaws and by the genuine affection that he has for the last of his kin. Costner’s especially strong in the compelling courtroom scene that brings Elliot face to face with this unacknowledged bigotry, and his incensed, yet impassioned tirade on race relations marks Black or White’s most authentic moment for tackling the elusive complexities of race that have supposedly been bridged in the age of Obama.

It’s a bit unfortunate, then, that Black or White doesn’t go for full equality with a straight fifty-fifty billing between Costner and Spencer. Rowena isn’t nearly as fully formed a character nor as dynamic as Elliot is, although Spencer brings a great deal of the sass and the cheeriness we’ve all come to adore in her performances since The Help, so the film struggles to escape the feeling that it’s really a story about an old white guy protecting himself from some thieving black folks. It’s not a White Savior narrative by any means since the drunkard Caucasian is a greater danger to Eloise than anyone else in the film, but the film doesn’t afford the black characters enough dimensions to match the audience’s investment in Elliot. One key scene sees Rowena challenge Jeremiah for making the case about race rather than Eloise gives the film some necessary insight into the minds of the Jeffers, while Rowena’s confrontation with Reggie stresses the importance of affording Eloise a tangible connection to half her roots. Binder’s televisual direction rarely affords the actors an opportunity to bring Black or White to its full emotional impact since it rarely gives anyone a close-up—the camera barely gets any closer than a medium shot—and moving in a degree closer might have helped the excellent performances flesh out the dimensions of the characters. When Black or White tackles stereotypes and meets the double-edged characteristics of racial prejudice head-on, Binder and the actors do an admirable job of furthering the discussion without hiding the factors that are often considered too awkward to voice.

Perhaps the most effective tool in Black or White’s earnest depiction of racial tensions may be found in the scribbly crayon drawings that Eloise offers throughout the film. They illustrate a point that Elliot makes during his testimony that the colour of a person’s skin might be the first thing he sees, but it’s ultimately the interaction he has with that person that defines their relationship. Eloise draws her Grandfather Elliot and her Grandma WeeWee in different shades, but they (and Reggie) are equally adored in her innocent depictions of an ideal happy family. Black or White isn’t perfect in its dissection of racial prejudice, but it’s frank, optimistic, and genuinely, earnestly moving.


Black or White is now playing in Ottawa at Cineplex Coliseum and Landmark Kanata.