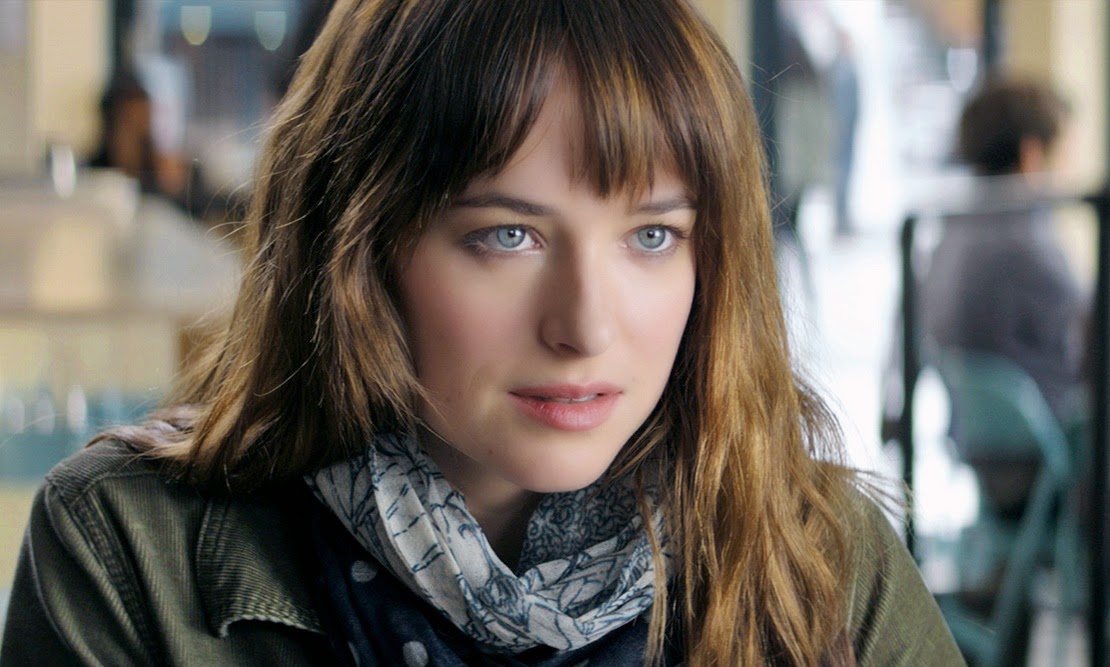 The following conversation took place during my bookselling days:

Thirty-ish female customer:
Do you have that trashy book everyone’s reading?

Me:
Fifty Shades of Grey? Oh, yeah. It’s right over here.
[Leads customer to the offending book and hands it to her.]
Here you go…
[Pauses awkwardly thanks to the “personal storytelling” angle of the store.]
We actually have a Buy 2 Get 1 Free deal going on this week, too, if you’re interested in reading the whole trilogy.

Customer:
Oh, there’s three of them? [Flips the cover.] Hunh. Have you read it?

Me:
[blushes] No, no. Not yet… But my mom has and she said it was fun. It’s really popular. I think it’s everyone’s mom’s favourite book right now.

Customer:
[LOLs] That’s why I checked the “Romance” section first. [Peeks inside.]
[Beat. Weird eyebrow-raise look. Glances at the cover again.]
Can I get this on my Kobo?


Yes, the long-awaited adaptation of E.L. James’ bestselling trashy novel Fifty Shades of Grey has finally made it to the big screen! Bend down; put your feet flat on the floor, park your butt, and prepare yourself for two solid hours of mild pain. Not since Nymphomaniac has a film with so much sex been so boring.  The only tingle Fifty Shades of Grey inspires is a pang of terror over what terms might be hidden in your mom’s Google search history. Is this meekly titillating tale really the cause for such a cultural phenomenon?

This film by Sam Taylor-Johnson (Nowhere Boy) is actually pretty tame for a film with source material of such notoriety. Only a year after Nymphomaniac, two years after Blue is the Warmest Color, and over twenty years after Basic Instinct, Fifty Shades of Grey seems rather flaccid. It’s only skin deep, and the skin on display doesn’t cover any new ground.

It is, in all fairness, pretty hot for a sexy movie penned by the screenwriter of Saving Mr. Banks, but there’s really no reason for this film to exist. Fifty Shades of Grey doesn’t make any headway for representations of female sexuality, which is notably disappointing for such a major studio production that boasts women in the director and writer credits, although they can hardly be blamed for the misfire of Fifty Shades of Grey if the rumours surrounding the production and James’ control are true. Fifty Shades of Grey is just as disappointing if one approaches it as a guilty pleasure since it’s neither ridiculous nor naughty. It’s anything but the hot mess one hopes it would be.

“I exercise control in all things, Miss Steele,” says Mr. Grey with penetrating sex-ray vision.
“Must be really boring,” Miss Steele replies as the high schooly flirtation foreshadows the game ahead.

Mr. Grey insists that his singular and restrained tastes are anything but dull, yet Miss Steele is correct.

“Eat,” he insists.
She asks why, but then eats. Ana also kneels, fetches, and bends over for Mr. Grey at his insistence.

Fifty Shades wastes no time in introducing the notion that Grey’s psycho-sexual control over Ana is unhealthy, but it wastes the opportunity to do anything substantial with the warped gender politics of his pleasure in playing the dominant to Ana’s submissive. Fifty Shades of Grey, in a post-Jian Ghomeshi culture both sensitive and attune to consent, force, and violence in the bedroom, unfortunately uses bondage and sexual dominance only as a cheap thrill. It treats the subject too mildly and too timidly to make an effective statement either for female empowerment or against the sadomasochistic subjugation of women. Dornan’s performance is all surface, and the tacked-on mentions of a crack-addict birth mother and a Mrs. Robinson figure are half-assed attempts to explore the drives behind Grey’s sexual thrills.

The film’s shyness also treats Ana’s growing sexuality rather lamely. Johnson has lots of spunk playing up the naughty librarian side of Anastasia Steele, but Fifty Shades rarely feels like a story of sexual awakening seen through Ana’s eyes. Husbands and boyfriends dragged along to see the film might actually enjoy it more (or  they’ll at least get more out of the sex scenes, anyways), and Fifty Shades disappoints by perpetuating the age-old male gaze in such a major project for female filmmakers and viewers alike. Taylor-Johnson presents the sexual escapades between Ana and Christine more as soft core lovemaking with some Beyoncé on in the background—there’s hotter stuff on soap operas—and it’s far too stylish and graceful to feel like anything beyond a glorified adaptation of a book one buys at the drug store.

Taylor-Johnson, DP Seamus McGarvey (Anna Karenina), and a trio of editors light, block and cut everything so elegantly and tastefully that nothing too indecent creeps into the frame. There are flashes of pubic hair and a millisecond tease at Dornan’s nether regions that makes Ben Affleck’s money shot in Gone Girl look like a long take. Fifty Shades of Grey carries an unmistakable whiff of studio modesty. Fifty Shades holds back and opts for an R-rating (so that parents can take their kids) when it really needs to approach NC-17 territory to be hot and wild enough to work as either art or novelty, and the restraint inadvertently passes judgement on Grey and Ana’s sexual preferences. (The reserve looks really bad on Universal’s part, since the film comes shortly after the release of Unbroken, which itself struggles to shake the effects of studio sanitization to achieve its full force.)

Fifty Shades of Grey is now playing in wide release.


What did you think of Fifty Shades of Grey?

Does it deserve a spanking?