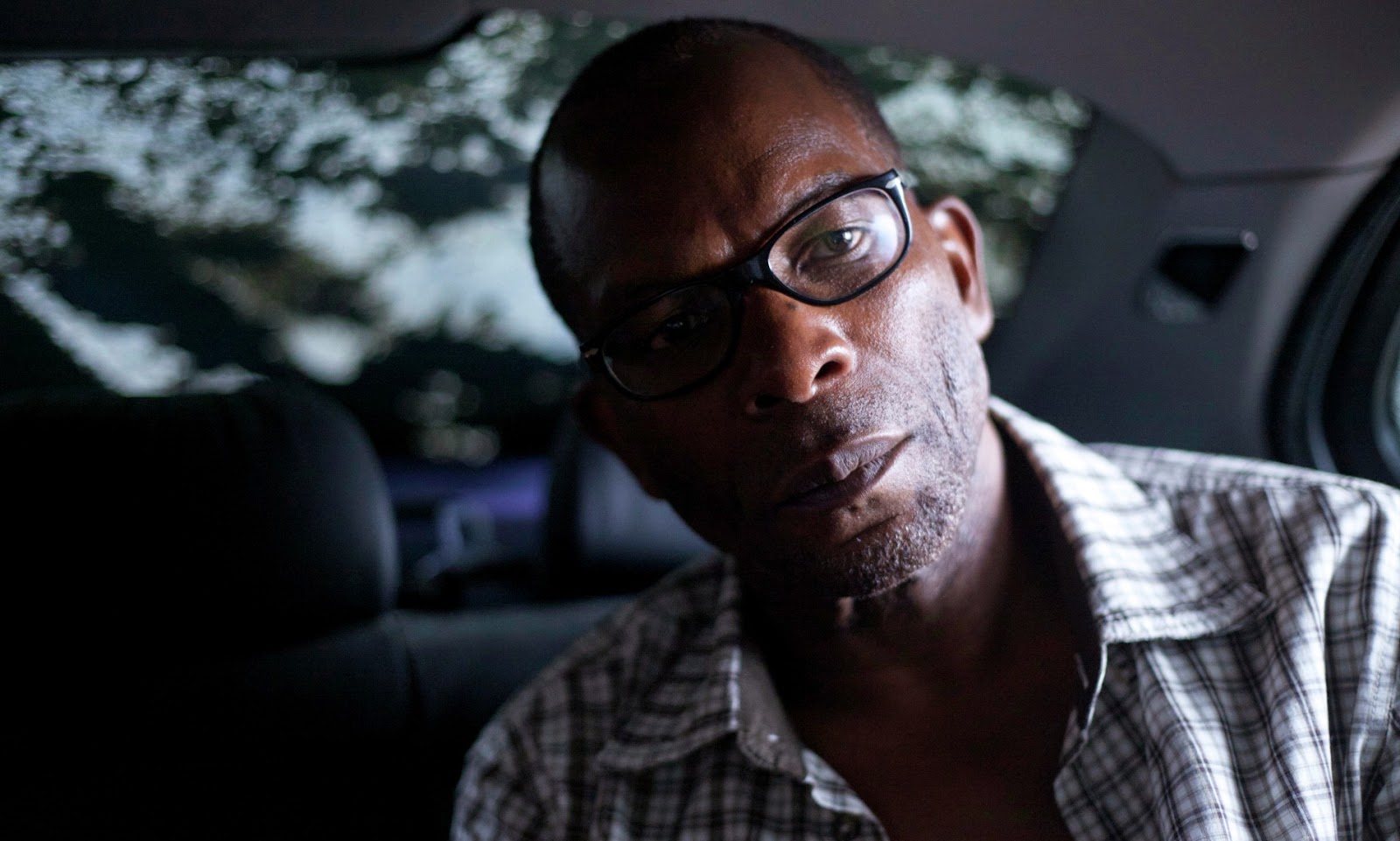 Here we have a garden. A lush ground surrounds a posh house, but the setting isn’t Paradise; it’s some time after the fall as a man and a woman repair what’s left of their lives after the dust settles. He could be Adam and she could be Eve—the audience never learns their names. Their home, nestled in the posh Haitian neighbourhood of Pacot, barely stands in the aftermath of the thunderous earthquake that shook the nation. Tension lingers, though, as if Murder in Pacot drops viewers into the eye of the storm and knows that the worst is yet to come.

Director Raoul Peck gives audiences an intimate look at life for one family in the days after the famous quake of 2010 as Murder in Pacot shows the husband and wife struggle to make sense of their shaken foundation. Their home is totally fractured. It should be demolished, but the half-interested white bureaucrat who pays them a visit paints the walls with marks of red (tear down) and yellow (fixable-ish) as he moves along down the line of damaged homes. This house, like the nation, is no longer stable and each move or attempt to support it could make the whole thing collapse.

Peck invests the film with rich and heavy symbolism that begins chiefly with the cracked house that the man and the woman struggle to repair. In comes a white aid worker named Alex (Thibault Vinçon) to pay the rent. He lives in the ruins of the couple’s life as they dwell in the shed, using the funds they collect from him to pay for the repairs of the house before it falls apart, and he brings with him an unexpected houseguest: a woman named Jennifer, née Andrémise (Lovely Kermonde Fifi), who thinks he’s her ticket to a better life. Alex offers nice things, but make no mistake: he’s a snake. (One of many.) Allegories couldn’t be clearer as the quartet of players each inhabits a role in this minimalist chamber drama, yet Murder in Pacot simmers towards a dense and rich deconstruction of wealth, class, and privilege.

Murder in Pacot takes its time in building a hot, sweltering atmosphere that brims with tension and uncertainty. It’s by no means a quickly-paced film, but the slowness of Peck’s approach proves consistently engrossing. Right around the ninety-minute mark, for example, or even well after that, one realizes that the titular murder of the film has yet to happen. Tempers flare, sexual tension builds, and cultures clash slowly but intensely as the remains of the house grind themselves into dust, yet solving a murder doesn’t seem to be on high Peck’s agenda. Narratively, anyways.

Thematically, though, Murder in Pacot assembles a cast of killers that feeds upon the privileges of class and social scale. The real trial for the man and woman isn’t so much all the ruins and dead people littering the area, but the prospect of making their own tea and doing their own laundry. Living without a servant is a disaster greater than a 5-point disaster on the Richter scale, and it’s jarring to see how strongly the entrenched dynamics of class thrive when everything else around the couple is broken. Alex, similarly, waves his sense of entitlement around like a Get Out of Jail Free card—one might be pressed to find a film that shows less favour for a foreign aid worker—so Murder in Pacot isolates the incident to the most privileged and least poorly affected people in town. The judgement couldn’t be clearer: what’s broken is not so much the earth, but the man-made structures and class systems that thrive on it.

At some point towards the latter act of the film, however, one realizes that a murder might have already happened. Anyone who stumbles into the man and woman’s yard remarks about the pungent odour—Peck perfumes the film with a Shakespearean scent of mortality—and the couple awkwardly and pointedly avoids confronting the obvious fact that death is in the air. Who died and why he died remains a greater mystery as Murder in Pacot builds a hefty case against the couple and the remnants of their old Eden. The drama moves outside the walls of their estate only once and provides a peculiarly satirical moment of comic relief when it does as the woman observes the futile relief efforts. The suffocating claustrophobia finally erupts when one last hope for escape comes in the film’s violent climax and the pent-up tension of Murder in Pacot finds its first and/or second victim.

Peck’s minimalist drama lets the quartet of actors carry the gravity of the disaster, and all four capably deliver challenging performances that draw the audience in to the characters’ respective flaws and beliefs in the value systems at which Pacot takes aim. Fifi is especially captivating as the stormy Jennifer. As the one player with something to gain from the potential for change percolating in the relief effort, Jennifer’s hunger to escape her life, and her open, yet playful, defiance of the unspoken codes by which the other three live is survivalism and its finest. Ogunmakin’s subdued performance as the trapped, unhappy wife offers a fine counterpoint, while Descas’s underplayed menace injects the perilous power of the upper crust into the mix.

The drama swells as Murder in Pacot progresses through the days at the estate—each day intermittently marks itself with a title card—and Peck gradually makes the essay on the fundamental divides between the players a looming disaster. Murder in Pacot bides its time, but when the storm finally hits, it strikes with full force.

Murder in Pacot screens at Diverciné at The ByTowne on Saturday, March 7 at 6:20 pm.
***Director Raoul Peck will attend the screening!***