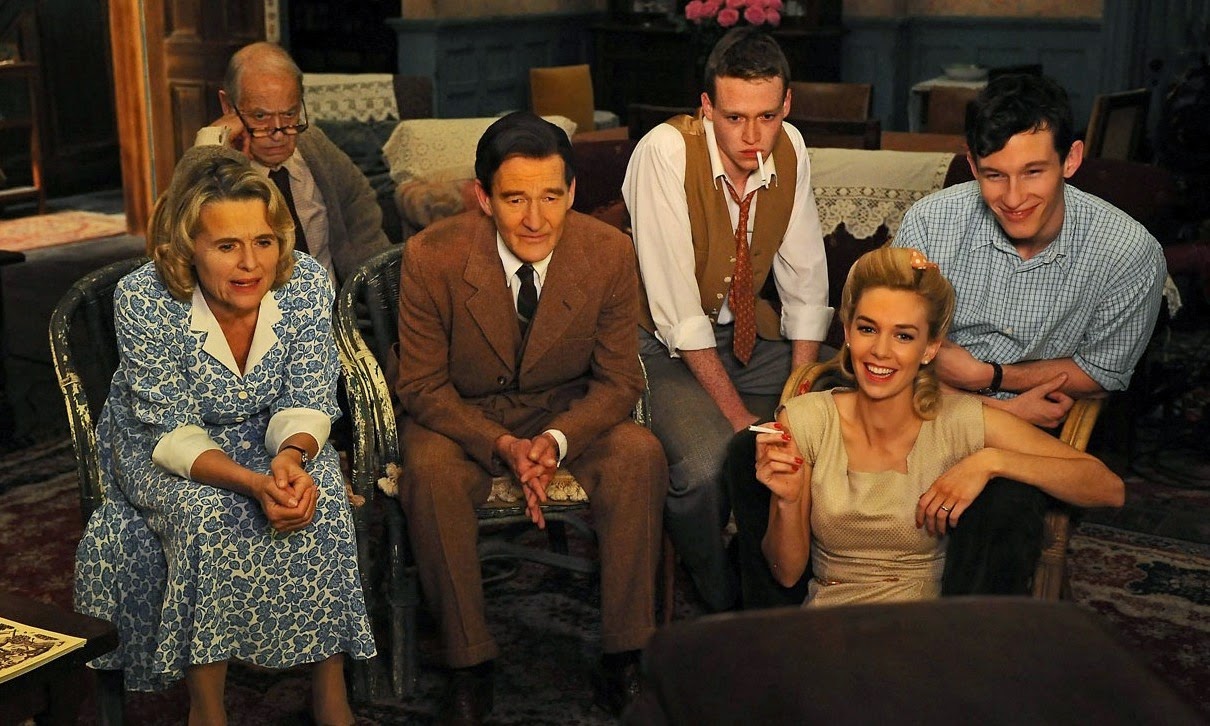 Shortly after watching Queen & Country, I hit up the Google to see the year in which Queen Elizabeth II became as Britain’s sovereign. By some fortunate timing, the folks at The Telegraph had just posted a lengthy essay debating whether England should through a roaring party to commemorate the Queen. It turns out that this year marks a landmark for the Queen, for Liz seems poised to become the longest reigning monarch in the nation’s history. Odds are she’ll make it since she’s in excellent health.


What this all has to do with Queen & Country, really, is the ongoing relevance of the Queen and Britishness six decades after she donned her crown, and the Queen’s coronation figures prominently in Queen & Country as director John Boorman envisions a stately coming-of-age tale centered right in that historical period that notes a changing of the royal guard, the horizon of the Cold War, the onset of the war in Korea, and other odds and ends of the history books. Boorman returns to the world of his 1987 Oscar nominee Hope and Glory with the worthy follow-up Queen & Country.

This wise and measured film is wonderfully reflective as the veteran filmmaker looks back on his own history through the lens of Britain’s past. Queen & Country literally picks up where the first film ends before it flashfowards ahead and young Bill Rohan is now grown up and making films. The opening scene of Queen & Country introduces a lad who has grown up with a love for cinema and a passion for telling stories and sharing experiences through the screen. Bill, played by Callum Turner in his adult years, grows up only minutes away from the famous Shepperton film studio (their big hit circa Queen & Country would be The Third Man) and he evolves with a romanticism and humour perfectly tailored for the movies.

Conscription looms for the Korean War, so Bill goes off to his own adventure that’s far from the escapism of the silver screen. Boorman presents life at the barracks with a droll tone and humour that as Bill and his fellow conscripts putter about, struggle to fall in line, and resist adopting the stiff upper lip of their superior officers. Queen & Country finds notes of dry comedy by playing life in the barracks straight and serious, and Boorman finds a comedy of manners in the routines and traditions of the British military.

His bunkmate, Percy (Caleb Landry Jones, Antiviral), is a womanizer and a prankster, and together they lead the class of militantly-disabled recruits in typing lessons. All the while they conspire against their ornery superior, Bradley (a splendid David Thewlis), who thwarts any of the young recruits attempts to bring a smile to the service. Thewlis is a scene-stealer as Bradley prattles about with an unwavering belief in his duty King and country (George, better known as the King from The King’s Speech, is still alive when the film begins) and he does a remarkable job of introducing the symptoms and nuances of Bradley’s post-traumatic stress as clings to the very system that ails him.

Bradley lives by the rule of the military down to the letter of the law book, for he cites infractions against Bill and Percy for anything from petty disobedience to missing a button. He repeatedly pulls the lads up for punishment to the droll annoyance of Major Cross (Richard E. Grant, very funny). One especially humorous sequence sees Bradley parade the recruits before the Major for the silliest of crimes, and Boorman draws out the amusing absurdity of the military mind by having Grant escalate his annoyance, fatigue, and boozy drunkenness as Bradley becomes the chief aggravator.

Queen & Country pits Bill and Percy on other droll larks as they thwart and antagonize their superiors. One bit featuring the prized clock of an officer (Brian F. O’Byrne), handed down from Queen Victoria, humorously nudges the prized possession of tradition while the boys’ off-duty pursuit of girls and nurses shows Britain’s crumbling class system as another battle losing steam. Bill’s key love interest is a posh girl he dubs Ophelia, but the girl, played by Tamsin Egerton, shares little in common with Shakespeare’s tragic dreamer other than her penchant for melancholy. Bill’s interest in her doubtlessly stems from his fantasy of big screen romances in which love goes beyond the limits of class and social status.

Queen & Country fills Bill’s days with notes of his love for cinema. From his off-the-cuff quotes of Casablanca to his fascination with Rashôman, the film builds a portrait of a young man who understands the world through art. One wishes that Queen & Country delved further into Bill’s journey from film buff to filmmaker, perhaps like Olivier Assayas does so wonderfully in his own semi-autobiographical Something in the Air, as the film begins and ends with a film shoot by the water, but the inspiration of this period still resonates by having Bill circle through his own life, the movies, and the course of history.

When Queen & Country leaves the barracks, it finds Britain on the cusp of change as Bill’s family and friends adjust to life in the years following World War II and ready themselves for yet another war. These slice of life scenes, which bring Bill back home, largely figure around the aforementioned coronation of Queen Elizabeth II. It’s nice to see a film use a celebratory historical landmark for once as the pivot point of the film’s grasp on history, and the choice helps the film’s mannered humour. (As does the consistently bright score by Stephen McKeon.) Boorman does a fine job of situating personal history within global history as Bill’s family and friends rallying around the telly in anticipation of their nation’s future. Whether Boorman intends to mirror the Queen’s longevity with his own is debatable, but Queen & Country offers a nice tip of the hat to those who’ve enjoyed a long reign.