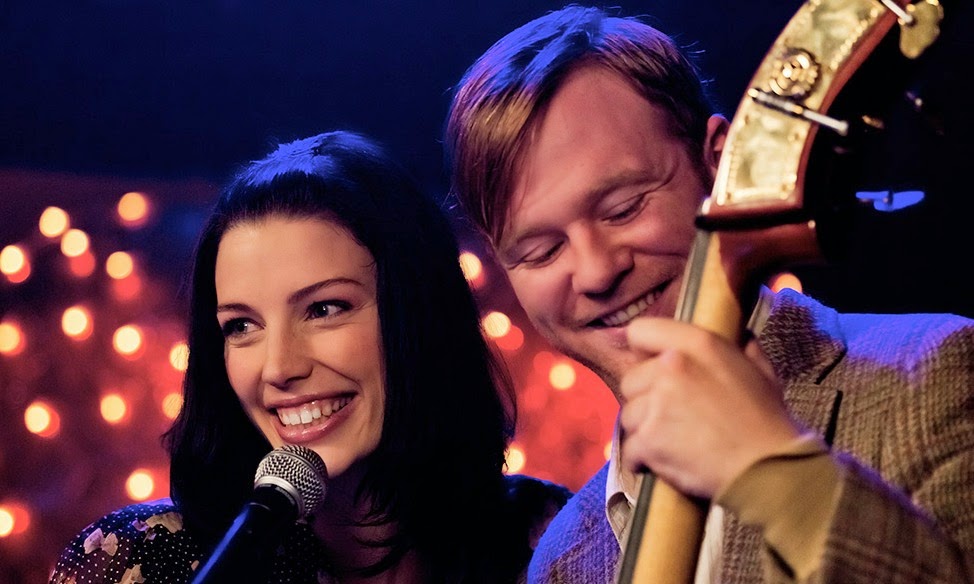 Congrats to Megan Draper on landing that leading role! Canada’s Mad Men star Jessica Paré does her best singing since seducing all of Madison Avenue with her smoky rendition of “Zou Bisou Bisou” as she takes the stage in the charming Irish ditty Standby. Standby, which opens the Toronto Irish Film Festival on Friday, March 6, takes audiences through a whirlwind one-nighter right in the heart of Dublin. Paré stars as Alice, the long lost love of Irishman Alan (Brian Gleeson, son of Brendan Gleeson), who sees her waltz back into his life while he’s working the information desk at the Dublin airport on a ho-hum Valentine’s Day. Alice is on standby—both literally and figuratively—as she waits to return home to America, and the night offers the best chance to revisit one connection before making another.

Alan, on the other hand, is more on layaway than on standby, since he never really got over Alice and just settled for the norm rather than face his fear of flying. Fortunately, though, this chance encounter forces Alan and Alice to revisit and potentially rekindle old feelings with one last night on the town. Pints of Guinness abound as Alan and Alice reminisce about the past and flirt with the reasons why things never worked out. Alan and Alice, both shy and hesitant, simply seem tired of flying Ryanair, to keep the airline metaphors going.

Alan takes Alice through some of the best Dublin hotspots, tagging along his co-worker Beatrice (Francesca Cherruault) as a stand-in for his current girlfriend to show Alice that he’s moved on. Paré and Gleeson are both very likable leads, but Cherruault is a scene-stealer with her sassy performance as Alan’s French colleague. Dry and cynical, and flirty and impulsive, Beatrice offers a fun counterpoint to the resigned, ho-hum life over which both Alan and Alice hover. The film suffers somewhat, then, when Cherruault exits the picture, but Standby then changes tone and tips its wings from bubbly rom-com to a more mature Before Sunset-y two-hander as Gleeson and Paré confront the feelings that linger between the two leads. The picturesque sights of Dublin are dreamy and exciting: they’re post-card perfect sights for the romanticism that both lovers need to escape.

Standby is sweet and amusing as it takes the would-be/should-be lovers on a tour of Irish watering holes that bring slowly let them reconnect. An impromptu wedding, for example, offers a fun (if slightly contrived) reminder that no flame dies out entirely as Alan and Alice encounter an elderly bride and groom tying the knot after decades of unrequited love. A trip to a drag show, on the other hand, is boisterous and silly, but, as Alice picks up the microphone and owns the gay bar with Alan for a sweet duet, Gleeson and Paré hit their stride by finding the right chemistry that Alan and Alice struggle to mix throughout the evening. Their pair of warm, natural performances effortlessly puts love in the air.

This charming and talky film from writer/director duo Rob Burke and Ronan Burke calls to mind the bubbly and seductive Juliette Binoche/Jean Reno airport-based rom-com Jet Lag as it brings a story of love, intimacy, and connection to an overconnected lifestyle for a new generation of thritysomethings for whom no flight pattern seems to work. Both Alice and Alan reluctantly embrace the possibility of forming their own flightplans since they’ve both tapped out on taking the expected course with ho-hum jobs and fizzled romances, and, like Juliette and Jean, they need the discombulating dizziness of airspace and the bubbly high of fleeting romance to put them on the right course.  Standby is a charmer, a brisk and lively crowd-pleaser worth the ticket for any hopeless romantic waiting in the wings.