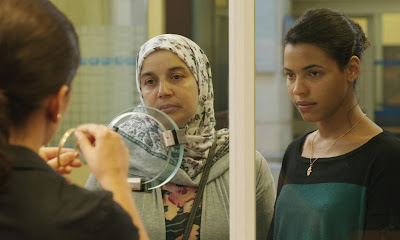 Fatima, Canada’s second feature film at Cannes, has debuted and is receiving largely positive notices on the Croisette. This co-production between France and Canada is directed by French director Philippe Faucon and Canada’s only film in the Director’s Fortnight this year. Fatima has mostly earned praise in early reviews for its sober and realistic portrait of life for immigrants in multicultural France. The Moroccan-born and Algerian-raised Faucon is also earning some notices for drawing out natural performances from Soria Zeroual and Zita Hanrot, although some reviews say that the inexperience of the actors occasionally shows.  That’s it for Canada at this year’s fest, though, and a respectable finish... unless one of our films or talents brings home some hardware!

Synopsis, reviews, and clips below:

Synopsis: Fatima lives alone with her two daughters : Souad, 15, a rebellious teenager, and Nesrine, 18, who is starting medical school. Fatima doesn’t speak French well, a great frustration to her in her daily relations with her daughters. At the same time, her girls are her motivation and her pride as well as a source of worry to her. In order to give them the best possible future, Fatima works irregular hours as a house cleaner. One day, she falls down a flight of stairs. While she is off work, Fatima starts writing to her daughters in Arabic, telling them everything she hasn’t been able to express in French.

Faucon, obviously very fond of all his characters, carefully avoids the patterns that many genre films fall into. There are no French characters to play the heavies and some of the immigrants are allowed to be uncomprehending, bitchy and envious.  It is probably fair to assume that Faucon’s picture is closer to real life than most of the other, more violent portraits of integration, but of course, this may also result in a less splashy response from a movie audience.
Additionally, Faucon’s insistence on working with performers of relatively little experience often results in touching moments followed by bouts of blank text recitations.

Unlike Faucon’s previous film The Disintegration (2011), Fatima is not a downer. Rather, it is a film that brings clarity and even a sense of exhilaration to the struggle of mother and daughters to succeed on their own terms and for one another. A relatively inexperienced actor, Zeroual brings quiet strength and intelligence to her characterisation of Fatima, taking the film to another level with her reading of a poem by Elayoubi, filled with the longing to speak her experience in her own voice, the voice of Fatima.

... Fatima, like its heroine, makes its points with quiet dignity without breast-beating or self-pity...

One of the flaws that keeps the film being as engaging as it might be is the way every shot seems to last about the same amount of time, producing a monotonous visual rhythm that only serves to make the plot seem even more episodic. And in all honesty, while her open, kindly face makes her a likeable presence, Zeroual's limitations as a performer only serve to exacerbate that flat affect elsewhere. Hanrot and Noah Aiche, who both, according to the press notes, are aspiring actors, fare a bit better, with Hanrot demonstrating considerable range and Noah Aiche a natural comic timing, especially in scenes where she flirts with but mostly disses young suitors who try to chat her up.

By painting a highly moving portrait of this mother consumed by the fear of her children’s failure, committing herself to a life as a manual labourer, Philippe Faucon keenly examines the principle of vessels of communication between generations ("where a parent is hurt, there are angry children") and the essential role that mastering codes of communication has in a person’s integration into society, first and foremost through the language, this French language that Fatima (who writes in her diary in Arabic at night) sets about learning to open the door to a new freedom.

[In Fatima, it is primarily the dialogue and situations that highlight the disparate relationships that the three women of the family may have with their respective environments. But beyond this description of their daily lives, Philippe Faucon describes, using symbols, a universe constantly governed by the terms of union or segregation: be it a lecture at the university on the fusion of cells, groups of characters parked within a commercial vehicle or behind barriers, and more of the first French lesson in which Fatima is asked to read carefully chosen words ("first name", "nationality", etc.).

The team of the France-Canada copro #Fatima (@PhilipFAUCON) on stage at the #Cannes2015 @Quinzaine. #CanadaCannes pic.twitter.com/GgWvEpIFCq
— Telefilm Canada (@Telefilm_Canada) May 20, 2015