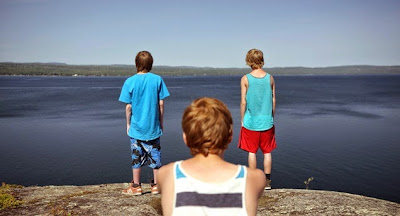 2015 seems like a slow year for Canada at Cannes after the triple-header of last year (aside for Denis Villeneuve’s Sicario in competition, which we’ll gladly take a bit of credit for if he wins the Palme), but a few voices in the sidebars should be noticed. One such voice is that of Andrew Cividino, whose debut feature Sleeping Giant recently screened in the Critics’ Week section. The film adapts Cidivino’s terrific short of the same name that screened at TIFF last year after debuting at Locarno and went on to earn a spot on TIFF’s annual Canada’sTop Ten list and a Canadian Screen Award nomination for Best Live Action Short. (Reviewhere.) As Cidivino’s first feature, Sleeping Giant is eligible for the Camera d’or prize at Cannes. Sleeping Giant stands tall given the generally enthusiastic response to the film so far. A few reviews have trickled in and are posted below along with two clips from the feature and the trailer for the short, but the film has additional screenings this week, so there will be more updates on the Canadian films at Cannes!

Synopsis:
Teenager Adam is spending his summer vacation with his parents on rugged Lake Superior. His dull routine shatters when he befriends Riley and Nate, smart aleck cousins who pass their ample free time with debauchery and reckless cliff jumping. The revelation of a hurtful secret triggers Adam to set in motion irreversible events that test the bonds of friendship and change the boys forever.

What further sets the film apart is the exceptional performances by the lead kids that director Andrew Cividino elicits. Jackson Martin is the ostensible central character, and he quietly but convincingly comes across as equal part innocent and asshole. Newcomers Nick Serino and Reece Moffett are revelatory, complete naturals as endemic to that environment as the landscape. The two boys battle with such convincing verisimilitude that it's hard not to see them as documentary subjects...

Sleeping Giant is exceptional and affecting, a film both provocative and probing of the deep characteristics of these kids. Yes, there are moments that veer towards the predictable, but there's enough heart and grit in the telling that I found myself swept away anyway.

... although the script is sometimes a little too on-the-nose in its delivery of the requisite, development-money-approved dramatic beats, Cividino [sic] loose, free-flow rhythm disguises the joins effortlessly, and semi-improvised sounding verbal jousting between the boys achieves an impressive naturalism...
What’s particularly admirable here is the way the cast and filmmakers illuminate not just the wit and charm of young men, but also the callow cruelty of youth, driven by a killer combination of naïve idealism, solipsism, poor self-esteem, and raging hormones. Aptly chosen locations and production design collaborate effectively to evoke the scuzzy glamor of resort-town games arcades and golf courses, while Chris Thornborrow andBruce Peninsula’s elegiac score casts a spell.

As Sleeping Giant opens, an ominous, pounding, percussive score atop images of natural beauty alert the audience that not all will be idyllic in this teen tale. Unfortunately, Cividino, developing the material from a 17-minute short he made last year, tips his hand in such a way that viewers are prepared to expect a dark turn in what initially seems like an unassuming slice-of-life film...

Cividino digs beneath the surface, though, to illuminate male-bonding rituals, especially how young men jockey for position and try to assert dominance. Cinematographer James Klopko documents the gorgeous water and beautiful wide-open spaces where these boys are vacationing, but Sleeping Giant consistently undercuts the lakeside eye candy by reminding us of the boys’ unfiltered testosterone, which provokes Riley and Nate to act out and impressionable Adam to follow their lead.

Says that Canada has found its Stand By Me and more:

With Sleeping Giant, Andrew Cividino sets the bar. His visual treatment, although crossed by pretty suspended moments, disregards turn-key symbolism of easy metaphors and other affectations inherent feature debuts on the subject.

Despite a conventional framework, whose broad outlines have been exploited elsewhere until their dregs Cividino successfully prints his sensitivity to the relationships that unite the three boys. Turning his back on sentimentality, he explores the intricacies of a period where everything counts for survival: the weight of words unspoken, buried fears, youthful delusions, etc.


With an average of four or five takes per scene over six weeks, the Sleeping Giant footage was, appropriately, outsized – a hefty 70 hours of material, more in line with a documentary than a drama. Cividino says he spent every day from October through to two weeks before the festival working with his editor, James Vandewater. “We watched those 70 hours more times than I can count, finding the moments and shaping the story, but we always knew we had something special.”
He adds, using a metaphor well suited to this homegrown story from Northorn Ontario, “We had seen these performers in action, so it was just a case of clearing away the ore.”

Cividino depicts the tricky male power games between the boys with tact and compassionate impartiality: Adam may be the “good boy” of the group, but he’s not averse to a little brattiness. All three young actors excel, convincingly negotiating their characters’ impetuous mood swings and surges of false bravado; newcomers Moffett and Serino return from the film’s shorter incarnation, while Martin makes a delicate impression in the feature’s most quietly complex role.

A massive, whooping congrats to @AndrewCividino and @karenharnisch on the @cannes premiere of their fantastic film 'Sleeping Giant'. Woohoo!
— Connor Jessup (@connorjessup) May 15, 2015