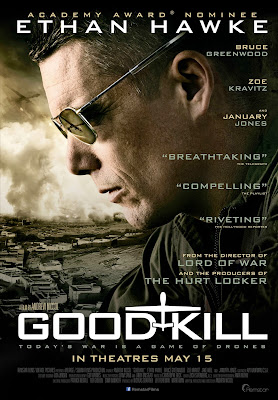 Set your sights and take aim with Ethan Hawke’s latest film, Good Kill! Good Kill opens in theatres May 15 from Remstar Films, but readers in Toronto and Vancouver can attend a sneak peek before the film opens in their city. Answer the trivia below to win tickets!


Synopsis: The story of a fighter-pilot turned drone-pilot, based in Las Vegas, fighting the Talibans by remote control for twelve hours a day, then going home to the suburbs with his wife and kids for the other twelve. But the pilot is starting to question the mission. Is he creating more terrorists than he’s killing? Is he fighting a war without end? One soldier’s tale with epic implications. Produced by Academy-Award Winner® Nicolas Chartier (THE HURT LOCKER) and Zev Foreman (DALLAS BUYERS CLUB), GOOD KILL marks the new collaboration between Niccol and Hawke following GATTACA and LORD OF WAR.

Thanks to our friends at Remstar Films, Cinemablographer.com has double passes to catch a sneak peek of Good Kill at the following screenings:

Send your answer to contests@cinemablographer.com with your full name (required for a guest list) and the subject “Good Kill – [City].”*

Good Kill opens in theatres May 15 from Remstar Films.

*One entry email entry per person/household, please. Multiple entries will be deleted and marked as spam.
** Entrants may be limited to one win per month subject to availability. Winners who are caught abusing the system may become ineligible for future wins.
Posted by Pat Mullen at 5/04/2015 01:13:00 PM