Hot Docs Review: 'The Closer We Get'

The Closer We Get 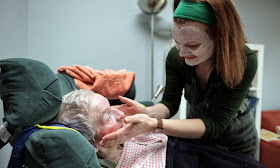 Director Karen Guthrie gets up close and personal with her family in the almost unbearably intimate film The Closer We Get. Guthrie tackles the elephant in the room that resides at her family home when her mother, Ann, has a stroke and remains in the care of her husband, Ian. The plot thickens when Karen reveals that Ann divorced Ian years before, yet they’ve remained together ever since. The plot then thickens once again as Karen’s dip into her family’s unspoken history takes her on a difficult journey from Scotland to Ethiopia and back.


To reveal any more information would be to rob The Closer We Get of its understated bravery. Guthrie and her parents expose themselves bare in this film, and their guarded revelations show wounds that feel fresh. These people don’t like to talk about themselves and their daughter captures the vulnerability of her parents as they avoid saying the unsayable when fifty years of marriage(ish) are on the line. Guthrie invites the audience to appreciate both sides of the argument as she creates a compelling portrait of her mother, arguably a victim in the whole affair, while she looks admirably at her father (a victim of his own sorts) who nurtures Ann when he could have easily used their divorce to exit the picture. It’s a touching and frank character study.

How the film takes the story beyond Ann, Ian, and their family is another story. The closer we get to the lives of these characters, the further the film moves away from universal truths that could be explored. The film doesn’t quite invite the fuller picture, and it's never clear what Guthrie wants the audience to take aeay from her family's story, but the film is lovely as an intimate and brave family portrait.