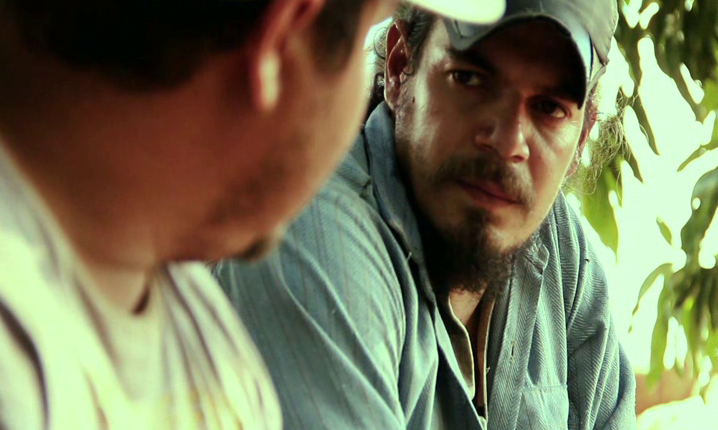 Few folklores turn out to be true, and there’s a certain wonder to seeing fantasy become fact. Just imagine if all those pots of gold that leprechauns left at the end of the rainbow turned out to be real! A few golden nuggets of lore surfacein the stark bare-bones fantasy Empty Cans from Paraguay when treasure hunter Alfonso (Aníbal Ortiz) stumbles upon some buried gold hidden after the War of the Triple Alliance. This treasure, known as plata yvyguy lies buried in graves around Paraguay, stashed away after the war and covered alongside the bodies of the men who stowed away the gold for the soldiers with hopes of gaining of few coins. This gold, like most folklore fortunes, is cursed.


Alfonso unearths his poor fate when he robs another trio of treasure hunters and steals their gold. The violent altercation puts Alfonso in a pickle—and Empty Cans too—since the lead of the film is no Indiana Jones. He’s a cold-blooded killer and rotten to the bone, but does he really deserve what’s coming?

This micro-budget drama brings elements of horror and fantasy to the Latin American Film Festival as the ghosts that come along with Alfonso’s stolen treasure guard it fiercely and bring retribution on anyone who touches it. Alfonso usually spends his days plucking cans in the landfill, and the quick payday of this score is far less appealing than his days of rummaging through the trash as he and his partners in crime become targets of unseen forces and trickery.

Director Hérib Godoy executes some legitimate thrills despite the modest budget of Empty Cans. Relying on only the gritty realism and atmosphere created by harsh lighting, sparse sound effects, and the practical visual effects of a no frills cameras (the film was shot on a handheld Canon EOS Rebel T2i, which goes for about 500 bucks, along with some effective Go-pro shots) to create some supernatural terrors. The low-key performances don’t prove quite as thrilling, but the naturalism of the film is often effective as it chases ghosts through forests, shacks, and landfills. Empty Cans creates real-world horror.

Empty Cans screens at Ottawa’s Latin American Film Festival on Sunday, May 4, at 4:00 pm in the in the River Building Theatre, Carleton University.