A Tale of Sound and Furiosa 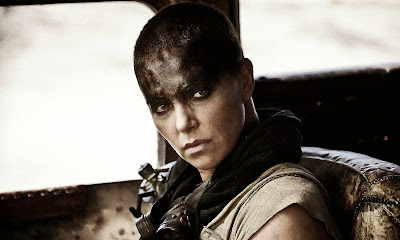 Vroom! Vroom! Mad Max: Fury Road puts the pedal to the metal and kicks summer movie season into high gear. School’s not even out for the summer, so a film this crazy might have played even better six weeks from now in the brutal summer heat, but Fury Road is the loudest, wildest, most action-packed bonanza at the multiplex right now. It’s exhilarating escapism.

Director George Miller virtually seems out to lunch for revisiting his franchise of the 1980s with this nearly dialogue-free tent-pole production that features mostly practical effects and a strong feminist bent to boot. However, Mad Max delivers more just a tale of sound and fury even if it looks like the same nonsensical video-game-passing-as-a-movie that panders to the masses these days. Miller’s on to something. Fury Road, for all its unrelenting action and mayhem, feels like the result of a filmmaker listening to the demands of audiences and tinkering with mainstream formula to deliver a counterpoint to studio garbage.

Tom Hardy’s Max, for one, isn’t quite the powerhouse action star of the film. That title belongs to Charlize Theron for her sturdy turn as Furiosa, the resolute road warrior who smuggles five women out of a hellhole of captivity. Hardy and Theron make a strong team as Max, a captive to the same clan of Stone Age skinheads whom Furiosa double-crosses and escapes, save each other on the long road home. There’s far more depth and fury to Theron’s character, though, as Furiosa’s grit and physical scars mark her as a woman who endured the same hell as the five girls in her care. Fury Road is mostly laudable as a smart reply to the lack of strong roles for women in Hollywood, as it shows that a mainstream action film, even one that, superficially, seems like a loud opus for boys and their toys, can let a woman kick more butt than her male co-star does. The film smartly makes Max and Furiosa a team, rather than rivals, but when a troupe of wise old female warriors joins them, there’s no denying that the film presents one of the most significant steps for representation in mainstream action films since Alien. With the one-two punch of Katniss Everdeen and Furiosa, the times are changing and Fury Road is ahead of the pack.

It’s a long road, for sure, as Fury Road pummels ahead in an unrelenting car chase across the desert (the film was shot in Namibia) as Max, Furiosa, and her quintet of escapees evade warlord Immortan Joe (Hugo Keays-Byrne) and his army of testosterone-heavy skeletons who can’t wait to die in battle. Miller presents one full-throttle set piece after another as Fury Road essentially offers a two-hour action sequence punctuated by the occasional pause for breath or, more rarely, a line of dialogue. Fury Road is load, fast, bombastic, and frenzied as tankers, big rigs, motorbikes, and car accelerate and collide with more aggressive fury than two Hot Wheels mashed together by a tot having a good time. It’s a breathless car chase and more of a gas-guzzler than all of the Fast and Furious films put together.

Fury Road escapes the monotony of most other actioners that are light on substance and heavy on pizzazz thanks to the sheer insanity of Miller’s direction. The film’s a technical feat as it presents some action sequences and disasters that would impress even as CGI cop-outs, but as an orchestration of practical effects and stunt work, Fury Road stuns: making a film with this much mayhem is no easy feat. (There’s no need to see the film in 3D, although the overwhelming sound and bass of an Ultra AVX screen is worth the ticket.) Top-notch cinematography, editing, and an operatically propulsive score by Junkie XL make the experience doubly thrilling. Fury Road never takes itself too seriously, either, despite the bleakness of the barren post-apocalyptic landscape and the grimness of its weary road warriors. Miller brings a comic touch to the fracas with the a hilarious goon at the helm of Immortan Joe’s army: the soldier is a living hood ornament who plays the electric guitar throughout the non-stop nonsensical action, which spews fires with ejaculatory fury while the rest of Joe’s band pummels on the kettle drums to keep the boys pumped up. The film embraces the wild opus of Mad Max’s adrenaline-fuelled thrill, and it’s hard not to go along for the ride.

Fury Road, however, lives on the premise that spectacular action and flawless technical work is enough to carry a film. The film undoubtedly succeeds in these regards. Audiences looking for more will find the film lacking and disposable, although Theron especially gives the film enough punch and conviction. The depth of the two leads and the notable feminist bent keeps the film at a premium grade over other unleaded blockbusters even though Fury Road ultimately provides little else in terms of substance. After such an exhausting doomsday ride, audiences can leave the theatre on an adrenaline high and leave the film at the door. Summer movie escapism, indeed.