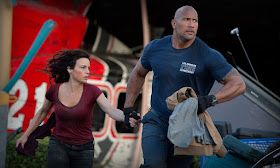 Some Canadian directors are setting are setting Hollywood on fire, but Brad Peyton definitely isn’t one of them. After the successes of Jean-Marc Vallée, Denis Villeneuve, and others, Peyton puts the ‘Eh’ list to shame with his poor man’s Roland Emmerich film, San Andreas. It’s about as bad and pathetic as one might expect for a disaster film with a Canadian budget (see: The Colony for something along that line), but San Andreas is a big bad Hollywood production to the hilt and, wow, it isn’t pretty. This awkwardly directed VFX pic scores mega points on the Richter scale but pretty low on the Cinemablographer scale. San Andreas, ironically, has many faults.


Peyton, the director of Cats and Dogs 2 and “The Republic of Doyle,” teams up with Dwayne Johnson, né The Rock, for this good old-fashioned tale of family values and wanton destruction. Johnson plays Ray, a rugged firefighter/Real Life Superhero who valiantly knows how to survive any and all natural disasters. Ray’s smarts probably come from watching a bunch of Netflix recommendations he earned after giving The Day After Tomorrow five stars. San Andreas, simply put, plays like a bunch of aftershocks rippling from bigger and better films. It’s derivative, familiar, and disappointingly dull.

San Andreas goes for a high-concept disaster story as one scientist (Paul Giamatti, wasted) studies patterns that allow him to predict earthquakes and—shocker—earthquakes start to happen once he and his colleague are testing their theory in the field. This seismic shifting starts at the Hoover Dam—a landmark so big it almost makes San Andreas resemble a legit Roland Emmerich movie—and it works its way to San Francisco where Ray’s daughter Blake (Alexandra Daddario) is heading with her mom’s new boyfriend (Ioan Gruffudd). Disaster strikes and Ray finds himself en route to save his family along with his ex(ish)-wife Emma (Carla Gugino). Along the way, they encounter earthquakes and tsunamis and floods. (Oh my!)

There’s nothing especially remarkable about the visual effects here even though Peyton and his team blow up tons of shit, ruin roads, create waves in crappy 3D, and topple buildings like kids playing Jenga. San Andreas flows like a carefully calculated algorithm on both its narrative and visual planes. Everything happens at such a precise pace that anyone who’s seen a disaster movie, be it The Day After Tomorrow, Volcano, Dante’s Peak, The Towering Inferno, Titanic,  or, more aptly, 2012, is bound to go on auto-pilot. There’s no point in a seeing a VFX-driven smorgasbord of destruction that fails to registers as urgent, terrifying, or thrilling. How all this destruction and mayhem can be so boring, though, is San Andreas’s biggest and only surprise.

San Andreas delivers carnage at an unrelenting pace and it assaults audiences with CGI chaos, and it’s about as far as one can get from this month’s other action-packed gong show, Mad Max: Fury Road. Both San Andreas and Mad Max feature one elaborate set piece after another with very little dialogue in between. However, whereas Mad Max proves a white-knuckler with its frenzied orchestration of sound and fury, which also works on a level of art thanks to the old-school practical effects, the algorithmic action in San Andreas just... happens. The difference between the two films is mostly one of scale and vision, but the crucial difference is that one film invests the audience in new and exciting characters while the other recycles stock characters.

San Andreas doesn’t work because the Ray and his family are sketched even more half-assedly than the effects are. Audiences have seen this family before: the parents are about to sign divorce papers, they’ve lost a child, they desperately love their surviving daughter, and the mom’s BF is a d-bag. Johnson and Carla Gugino are perfectly serviceable as the parents—at times even convincing—but San Andreas ups the family drama schmaltz so high on the Richter scale that it’s off the charts. Johnson’s solidly as an action star, though, and as likable as ever.

The credited scriptmakers also completely discard a third of the cast (namely Giamatti and Archie Panjabi) almost partway through the film, and most of the deaths in the high body count are inconsequential. There’s no sense of loss. The only novelties are a hilariously inappropriate cover of “California Dreamin’” by Robot Koch & Delhia de France and a deliciously bitchy cameo by Kylie Minogue as Ioan Gruffudd’s sister, who’s just as unlikable as he is. It’s the most enjoyable throwaway role of the year.

San Andreas mostly takes itself too seriously for audiences to enjoy the ride. Peyton attempts to situate the earthquake terrors as a kind of 9/11 parable, and it rings false. Buildings collapse and dissolve like the Twin Towers do in oft-repeated images. Victims fall from the sky. Firefighters save lives. Families surround a fence at Ground Zero and search for loved ones. Finally, and worst, an American flag takes centre stage in the finale as Ray solemnly yet proudly asserts that the next step is to rebuild. San Andreas earnestly attempts to use contemporary traumas and disasters to maximize its payoff, but it ultimately talks down to the audience and uses these touchy subjects for show in its operatic disregard for human life. The only thing that could save San Andreas is a real-life earthquake that shakes the theatre, collapses the ceiling, and turns moviegoers into raspberry jam.