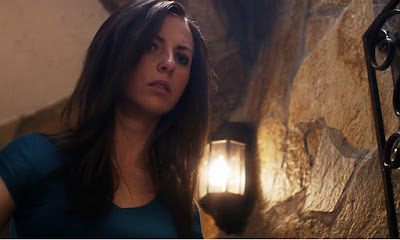 When the little pig saw what the wolf was about, he hung on the pot full of water, made up a blazing fire, and, just as the wolf was coming down, took off the cover, and in fell the wolf; so the little pig put on the cover again in an instant, boiled him up, and ate him for supper, and lived happy ever afterwards.
-The Three Little Pigs

If high school is horrible then what happens to Kylie on that Halloween night is a true nightmare. Berkshire County puts Kylie in peril when she escapes her jeering peers to go babysitting at a mansion the country and three trick-or-treaters in You’re Next masks show up and put Kylie through hell. These three pig-masked assailants have a thirst for blood that can’t be slaked: they’ll bash into the big brick house with a bigger puff than any wolf could muster.

Berkshire County creates some genuine thrills with its mostly straightforward account of the babysitter-in-danger narrative à la Halloween, but it remains consistently tense and suspenseful as Kylie outsmarts the pigs. Like a good nursery rhyme, Berkshire County makes its point quick and cleanly. Director Audrey Cummings knows that a better horror film is one that delivers a fast, solid punch, and Berkshire County gives one to the gut. The director uses the space of the large, yet labyrinthine house effectively with perspective and negative space providing more chills than blood or violence ever could thanks to the moody atmosphere she creates with DP Michael Jari Davidson. The few splashes of gore in Berkshire County are a quick, fleeting spatter, for the film rests more on psychological horror than on pure visceral bloodsport.

Berkshire County offers no explanation for the terror that the three pigs—a dad, a mommy, and a piglet—wreak on Kiley and the two kids in her care. The film offers no motivation for the assailants to put pork on their forks as they butcher cops and kids who stand in their way. Their attack shrewdly parallels the senseless exploitation that Kiley faces earlier in the film, for her classmates never explain why they videotape her in engaging a sexual act, nor do they have to describe their reason for uploading the film to the Internet. The script gradually re-introduces Kiley’s first victimization as she tries to escape the other, and the question of whether the attack is retribution for her first transgression lingers above this rape culture fable.

Berkshire County puts our heroine through hell as this intense film moves breathlessly through action and suspense. Winters offers an impressive performance as Kylie confronts her own self-doubts and limitations during the night of terror. Partly a Canadian answer to Laurie Strode and partly a sister of other new takes on women in horror, Kylie is a strong, smart, and resourceful character. She’s a fighter, not a victim, even when all the odds are stacked against her, and she handily plays the wolf to the three little pigs trying to get in. When Kylie finally bares her teeth, Berkshire County howls hello to an exciting new entry in Canadian horror.

Berkshire County has a sneak peek as part of the Canadian Indie Film Series in select Landmark Cinemas on Wednesday, June 3. (It screens in Ottawa at Kanata.)

It opens theatrically on June 5 at Landmark Kanata, the Carlton Cinema in Toronto, and Landmark 24 Whitby.