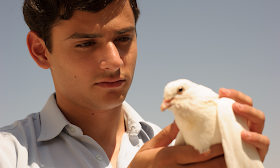 Baghdad, 1950. A young man named Kabi (Daniel Gad) sees his family as the final turn of a legacy seventy generations in the making. His family faces the news that the Jewish community is being forced to leave Iraq and depart the land where their ancestors lived for many years. Kabi’s family explodes both from within and from without, and The Dove Flyer looks at the world through the eyes of one young man whose perspective shifts constantly. How can one make any sense of the world when there’s nowhere to go and nowhere to be free?


Each of Kabi’s kin moves in a different direction and the rift begins when, in a tense and riveting opening scene, his uncle Hazkel (Eli Dor Haim) is arrested for allegedly publishing subversive articles and essays. Kabi finds himself tasked with a mission beyond his years when he steps up to help find justice for Hazkel and he makes himself an ally to Hazkel’s wife, Rachelle (Yasmin Ayoun). Kabi’s parents look to different futures as his mother (Ahuva Keren) wants to return to the Muslim quarter and his father (Igal Kabi) wants to move the family to Israel. His uncle Abu (Uri Gavriel), finally, just wants to tend to his doves in peace and pretend that all is fine.

The Dove Flyer, based on the novel Farwell, Baghdad by Eli Amir, offers a resonant study of a little-told chapter of history. The film strongly conveys the myriad political ideologies, religious affinities, and cultural identities that clashed at the time—and still do today around the globe. By intersecting various family members throughout their own directionless journeys, The Dove Flyer creates a portrait of collective loss and rootlessness.

The film succeeds as a valuable history lesson and character study through Kabi’s tale. The competing storylines, however, aren’t filled out quite as fully realized as Kabi’s is. At one hour and forty-five minutes, The Dove Flyer moves quickly between threads and some of the movements between subplots are disjointed and disorienting. The Dove Flyer might be one of the few examples in which another hour of running time might be welcome to match the expanse scope and significance of the story.

The film is Kabi’s story, though, as it forges a coming of age tale in which he learns to navigate the competing and conflicting allegiances he has to his father, uncle, and friends. Kabi, a budding journalist himself, is chiefly on a quest for truth as he investigates Hazkel’s arrest and looks for the parties who wronged him. He flirts with romance with Rachelle and her entrancing eyes, while his friend Adnan (Tawfeek Barhoum) teaches Kabi that revolution and sex go hand-in-hand. Kabi has the wisdom to see that Adnan’s libido isn’t the smartest teacher a young man could have, so his respect for the women in the tale gives him a strong foothold in the underground and more allies than the other men in the tale could find. Kabi, an innocent, undergoes his own awakening as he loses sees the fraught conviction behind the play on home, family, and connection that his family emphasizes as they try to hold onto their homeland.

Gad leads the film in a strong performance as Kabi searches for answers and guidance along the way. He contains little boyish idealism despite his clean adolescent charm. Rather, Gad makes Kabi a silent revolutionary and a shrewd observer.

Strong performances from several supporting players, including Igal Naor and Ahuva Keren as Kabi’s parents, create compelling subplots and conflicting allegiances as Kabi’s search for truth—and himself—asks him to confront the different loyalties in his life. Gavriel offers a different kind of quiet power in the small and prickly role of Abu, whose attitude to the situation is simply to be unmoved.

Abu’s love for his doves blinds him to the fissures around him, but The Dove Flyer finds in Abu’s doves a rich and evocative metaphor for the Jewish diaspora as writer/director Nissim Dayan sees Kabi and his friend Adnan vent their anger by destroying Abu’s bird sanctuary and setting the doves flee. Some fly east and some fly west, while other doves simply flutter and return home. The rich imagery finds an ironic counterpart at the end with the white and winged airplane carrying some of the Jews out of Iraq.

The Dove Flyer screens in Ottawa at the Israeli Film Festival on Sunday, June 14 at 7:00 pm at the River Building Theatre, Carleton University.

(Friendly reminder that there's free parking across the street at Brewer Park!)

Please visit the CFI’s website for the full IFF line-up, plus information on showtimes, tickets, and memberships.