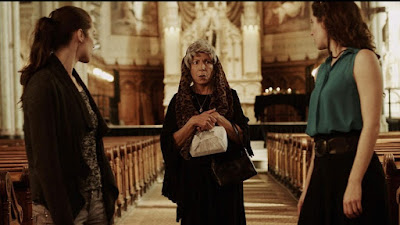 A big fat Greek wedding causes quite a ruckus, but a little loud Italian family fires up a storm. Mangiacake barely has more than four principal cast members aside from minor characters, background players, and supporting actors who appear towards the end, but it probably ranks higher on the decibel scale than a film with a full-fledged Greek chorus does. Sisters Tess (Melanie Scrofano) and Marie (Christina Cuffari) are pretty darn hysterical. They’re catty sisters well in the throes of sibling rivalry even in their twenties. They slap, shriek, and scream at will, much to the grief of their mom, Lilianna (Paula MacPherson), and Nonna (Jocelyne Zucco). No sooner than one can say vaffanculo, though, the sisters undergo a change of heart that takes the cake.

Well, their change of heart mostly takes a mangiacake. A mangiacake, however, isn’t a fluffy sweet dessert. It’s a bland white person, kinda like the Wonder Bread flip-side of a Guido from Jersey Shore, in the vocab of Italian-Canadians like Tessa and Marie. The sisters tease about mangiacakes and men when they reunite in the family home after Tess gets a concussion and Marie struggles with her acting. Marie clearly has a new beau, since she’s texting 24/7 instead of enjoying the Chinese take-out on which her mother slaved away while dialing the phone. Marie doesn’t talk to the guy, though, except in texts and naughty pictures, and even Nonna agrees that he’s probably a mangiacake. What kind of loser doesn’t even pick up the phone when his girl’s in distress?

Tensions flair with more spice than Nonna probably whips up in a pan of Frank Sinatra sausages, and Lilianna decides to let the girls grow up on their own. Scrofana and Cuffari have natural chemistry as the sisters, as they make Tess and Marie a loud, shrill affair of head-to-head bitchiness. These grown women are just little girls at heart and the actresses find a playful chemistry as they mix stuff slapstick comedy with down-to-earth charm, and make a fine cannoli of sorts and leave Nonna to clean up the crumbs.

Cuffari is especially good as Marie, as she brings the right amount of spunk and vulnerability. Marie knows that she’s the real mangiacake of the story since she can’t add any flavour or purpose to her life despite the variety of roles she plays to appear the opposite. Mangiacake has a lot of fun with the character of the hack actress when Marie takes the biggest faceplant of the film and bombs an audition when her very sanity is on the line. Marie makes a total boob out of herself with a slippery chicken breast, but as she scrounges for dignity on the slimy, now-salmonella-covered studio floor, she finds the one legitimate grain of authenticity in her acting chops after it’s too late. Auditions and interviews can’t go worse than this one does, but Cuffari humorously plays up the physical comedy of the disaster while injecting an element of sympathy into the moment.

MacPherson makes a strong impression too as the exasperated Lilianna, offering a deadpan counterpart the daughters, and the film feels her absence (appropriately so) in the latter act of the film. Zucco is also lots of fun in the smaller part of Nonna. Zucco, whom audiences will remember as the agent/hustler of the franglais disco-flick Funkytown, brings ample humour to the part by barely uttering a word. As she nibbles on biscotti, putters in the yard, and rolls her eyes beneath an assortment of fun wigs and nightcaps, Nonna adds a modicum of sanity as she watches a generation that’s lost its self-control and its respect for elders. The actress carries Nonna with hunched, humorous frailty and the subtle comedy of her performance nicely offsets the broader strokes in this multigenerational farce.

This Ottawa film marks one of the better local efforts on the feature film front of late with its professional production in spite of its modest origins. Local audiences will especially like the use of familiar sights, most notably Little Italy and a grand scene in St. Brigid’s church, but the off-the-wall authenticity of the film invites a wider reach.

Director Nathan Estabrooks makes a fun feature debut with Mangiacake. The film, co-written by Estabrooks and Cuffari, smartly contains much of the comedy within the walls of Nonna’s house and finally jumps outside and out into Ottawa just when there finally seems to be no air left to breathe in the modest little home. The volume might be a bit too high for some viewers, but others will enjoy this kin of Nia Vardalos by way of David O. Russell. Mangiacake builds on larger-than-life performances that draw upon cultural idiosyncrasies (yes, Italians really are that loud and yes, they centre virtually everything on either food, faith, or family) without veering the jokes too far into stereotypes. The film is fun, brash, and genuine, and it mixes a range of family values and cultural flavours to get the recipe right.