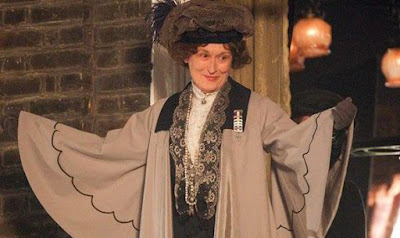 A great new trailer is out for Meryl Streep's big fall movie Suffragette. Streep co-stars in this film headlined by Far from the Madding Crowd's Carey Mulligan that tells the story of the fight for women's rights in the UK. The film, directed by Sarah Gavron (Brick Lane), reunites Streep with Iron Lady screenwriter Abi Morgan.


Synopsis:  Inspired by the true story of the women who inspired the world. Starring Carey Mulligan, Helena Bonham Carter, Meryl Streep, Brendan Gleeson, Anne-Marie Duff and Ben Whishaw. Suffragette is the first ever feature film to tell the inspirational story of the foot soldiers of the early feminist movement who risked everything in the fight for equality.

The new trailer also comes with the news that Suffragette will open the BFI London Film Festival on October 7th. London FF lists the screening as a European premiere, so Streep fans can still hope that Suffragette will debut at TIFF in September. US distributor Focus Features has done very well launching their award contenders at the fest, with Dallas Buyers Club and The Theory of Everything both premiering on the festival's busy first weekend. The film opens in North American theatres on October 23.