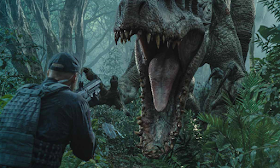 Jurassic World makes the dinosaurs bigger, louder, meaner, and scarier, but it doesn’t make them better. Park jumped the shark with the third Jurassic movie, and this fourth installment arguably returns the franchise to a respectable-enough level, yet the magic of the Jurassic world is gone. The loss is ironic, since the gist of Jurassic World is that audiences don’t find dinosaurs very exciting, so their scientists and corporate stiffs need to amp up the crazy and unleash a new monster upon the masses every now and then. The idea follows the same business plan: give an old film an extra shot of adrenaline, a lot of obvious product placement, and some more CGI, and audiences flock to the theatre like kids seeing a new dino. Jurassic World goes Godzilla the fourth time around as it roars and bares its teeth: if only the scientists behind the genetic engineering gave it a bigger brain.


Jurassic World revisits the world of Jurassic Park with the standard franchise formula of bringing new characters to the old location and having them follow a similar plot that gives audiences familiar twists while throwing in new surprises. The visual awe returns as the dinosaurs are more detailed and fierce than ever before, and the young boys on the trip, brothers Zach (Nick Robinson) and Gray (Ty Simpkins), carry themselves with far more composure than most little kids would while seeing a movie with so many scares. World is arguably the most adult Jurassic jet in terms of the scare factor.

The film nevertheless has a clear family-friendly appeal with a cheesy intro that sees mom (Judy Greer) say good-bye to the kids and wish them luck on a trip with their aunt. Said aunt is Claire (Bryce Dallas Howard aka Two-Slice Hilly), an uptight career-woman who oversees the operations of the park, which has been rebranded Jurassic World to let customers and investors know that this is a bigger, better and safer park. Claire says ‘hello’ and sticks the kids with her assistant and the two brother go gallivanting around the island while Claire tends to Jurassic World’s latest attraction: a T-Rex hybrid called ‘Indominus Rex’, which has a mean disposition from the start.

Jurassic World itself has a mean disposition, which sets it apart from the franchise’s Spielberg days. This time, the action carries a mean-spiritedness in place of the sense of wonder and awe that makes the first Jurassic Park such a marvel. As Indominus Rex stomps around the park à la Godzilla and other dinosaurs join in and kill every human in sight, Jurassic World plays out like cruel blood sport. The script essentially introduces characters with varying degrees of unlikability and primes audiences to wait and see the baddies get their just desserts. One particularly brutal death featuring pterodactyls and the big mosasauras is especially off-putting: the sequence teases out the bloody end of a relatively minor character with tasteless glee. Jurassic Park has death, destruction, and violence, but this action is different. It plays like blood lust. Death is the object of the film, not an obstacle in its greater adventure on the right to create life and play god.

The spirit of the film is different, too, without any prominent franchise originals like Sam Neill, Laura Dern, or Jeff Goldblum. Chris Pratt makes for a likable placebo for Neill’s Alan Grant, and Howard is fine in her action turn with one of the most inconsistently written characters of all time, as are Omar Sy (The Intouchables) and Irrfan Khan (The Lunchbox) in small roles as park staff. Jurassic has big footprints to fill after the T-Rex stomped so strongly the first time, and this return simply doesn’t deliver anything but lesser, if serviceable, attempts to cash in on the original’s appeal.

Jurassic World undeniably entrains as full throttle idiocy while the kids evade the big bad Indominus Rex and Two-Slice Hilly runs around the jungle in the sturdiest pair of high heels known to man. The sight of Howard running around and dodging a fifty-foot Rex without even stumbling in her heels frequently reveals just how silly Jurassic World is, as do the countless blunders by candidates for the Darwin Awards as dumb people go face to face with velociraptors, etc. and meet bloody ends. Director Colin Trevorrow (Safety Not Guaranteed) doesn’t have the same hold on the scope and tone of Jurassic Park as pre-War Horse Spielberg does, but the VFX team rises to the challenge with some spectacular dinosaurs that provide big screen thrills.

The film only really lives up to the magic of the original Jurassic Park when it lets the big bad T-Rex stomp out of his cage for the grand finale. This dinosaur isn’t a stone cold killer just because he’s a carnivore, and the triumphant return of the T-Rex brings a silly dino-to-dino showdown that’s bound to make audiences roar. Jurassic World is bigger, louder, meaner, and sillier than any of the Jurassic movies that have come before it, which is exactly what the sequel scientists in Hollywood engineered.