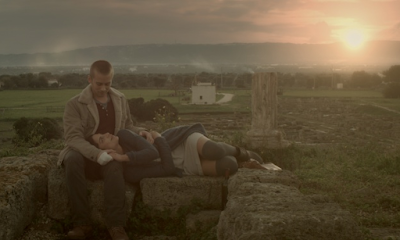 Love never dies. Vampires, werewolves, and other monsters of lore make horror one of the most romantic genres even if it usually entails bloods, guts, and gore. Love hurts, right?


Love bites hard when Evan (Lou Taylor Pucci) jets off to Italy following the death of his mom and encounters a lovely young woman named Louise (Nadia) in a seaside tourist trap in Bologna. He wants to grab a drink, but she wants a skip the small talk and head to bed. He wants to use a condom, but she doesn’t want to play safe. The morning after, Evan wakes up nipped by the love bug.

Louise isn’t a vampire, nor is she a werewolf. She, however, is afflicted by the same curse of immortality that makes love rather difficult when a girl’s pushing 2000 years of age in a twenty-five-year-old’s body and eternal youth gives her the occasional bloodlust. Simply put, she and Evan can’t grow old together for a variety of reasons.

The nevertheless make the most of it as she agrees to see him once the sun goes down and the mill about town, drinking wine, strolling, and chatting Julie Delpy and Ethan Hawke style. (Spring warrants the Richard Linklater likeness it frequently bestows upon itself.) Young love blossoms at every turn, partly due to the love-struck grin on Evan’s face and partly due to the spring-like blooming that flourishes whenever Louise runs her hand on the earth or smells a flower. She’s a force of both life and death—a most unusual beast.

Spring builds a simmering mystery as it gradually reveals Louise’s monstrous character. Her flesh rots. She molts. She eats people (albeit douchey American tourists). She performs ritual sacrifices and gets scorched by the sun, but other times she waltzes through daylight like an invincible vampire. She doesn’t infect Evan through sex, for Spring isn’t the usual sex-as-transgression trope one sees in similar films like Afflicted. Just what on earth is he? She’s a man-eater and a heartbreaker, for one, since Evan falls so hard for her it’s not even funny.

Writer/directors Justin Benson and Aaron Moorehead craft an intriguing hybrid species to match their mystical monster. Spring moves like a bittersweet tale of forbidden love as Evan and Louise stroll in the settling sunlight and fall in love à la Celine and Jesse in Before Sunrise. The twist, though, is that the audience never knows if Louise is going to burst into flames when the sun comes up or whether she’s going to chomp down on Evan when the mood hits her just right. The film teases the audiences with the sweetness of the love story and the mysteriousness of Louise’s condition.

The picturesque location, beautifully shot by Moorhead, builds the romantic and supernatural atmosphere alike as it looks gorgeous in the daytime and eerily sinister by sundown. Spring adds to Louise’s mystique with a slight play on art, religion, and antiquities by marking their courtship (and a few clues to her curse) with signals from classical art and lore. The film keeps one guessing, like a lover debating the feeling’s mutual enough to propose a second date.

Spring, above all, has an infectious sense of humour. The well-cast leads play into the dark comedy of the situation as Benson and Moorehead gradually push the film towards the surreal to test the limits of what Evan and Louise will do for love. Smart framing and blocking creates physical comedy with a series of will-she-or-won’t-she cliffhangers as Louise’s monster struggles to contain its passions. It could end with a kill or with a kiss, and Spring lets either little death smell as sweet as a rose.

Spring screened in Ottawa at The Mayfair.