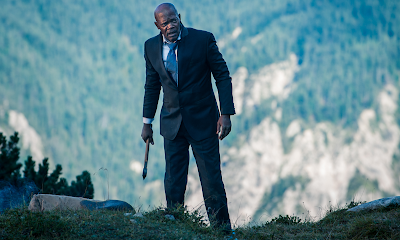 There are no snakes in the aircraft of Big Game, but there are ample slimy creatures to make Samuel L. Jackson get off the muthafuggin' plane. Jackson plays the President of the United States of America on the run from some would-be assassins in the ridiculously entertaining Big Game. The POTUS finds himself the prized buck on this international hunting expedition in which writer/director Jalmari Helander shows that co-productions can be just as loud, wild, stupid, and fun as Hollywood blockbusters try to be. Screw artsy-fartsy international affairs: the guilty-pleasure tent pole has officially gone global.


Big Game is the Air Force One of stupid with silly as its co-pilot, and that’s exactly what it wants to be as Jackson hobbles through the mountains of Finland after he escapes from the Presidential plane when his bodyguard (Ray Stevenson) double-crosses him and makes him the target of a nasty terrorist blitz. President Samuel befriends a young man named Oskari (Onn Tommila), who’s in the midst of his birthday coming-of-age ritual in which the boys of his village become men by venturing into the woods alone and bagging a prize that defines their manliness. Oskari’s dad caught a bear back in the day and thus is king of the jungle, but when Oskari finds the POTUS and guides him to safety, he snags a catch better than any kill. Together, the pair learns the qualities that best define a man and a leader as their mix of young blood and old wisdom keep them ahead of the smaller game that masquerades as predators.

Big Game plays out like one of the big budget shlock fests that Hollywood would’ve churned out in the 80s and now lives in the annals of VHS bins everywhere. It’s handsomely made gloss (it’s especially good compared to other commercially-oriented co-pros) with a better mind for entertainment value than artistic merit. The film never really makes sense and very little gets resolves in the half-assed screenplay that occasionally cuts to the oafish members of the President’s inner circle, including Victor Garber as Veep, Felicity Huffman as some undiscernible staffer, and Jim Broadbent as a CIA supersleuth, all of whom coast in pay cheque mode without doing any damage. They state the obvious and drive the exposition, and the edge of Hollywood inelegance feels appropriate in the clunky American scenes while the kooky Nordic comedy of the mountaintop farce gives Big Game is oddly dated appeal.

The odd-couple pairing of the President and this pre-teen Rambo makes for an unconventional buddy comedy as Big Game piles on a smorgasbord of ludicrous stunts, twists, and set pieces to keep the action moving at a fast pace.  Jackson is a riot in this role that plays his ever-growing badass novelty against the Presidential seal, while Tommila delivers one-liners with genuine playfulness. This pair of unlikely buddies dodges bullets, jumps from the sky, and rides the mountainside in a chest freezer, all of which unspools with madcap lunacy as Helander gives the President his own episode of Loony Tunes. Big Game provides great cartoonish badassery (or bassassage, I’m not quite sure of the term there) because it doesn’t take itself seriously for a single second, and thank goodness for that. Big Game is popcorn movie fun because it’s so over-the-top and ridiculous. But even Samuel L. Jackson fighting some snakes on a plane packs more credibility than President Bush.

Big Game opens in Ottawa at The Mayfair on July 10.