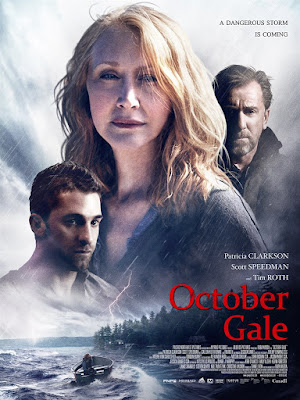 Hope everyone is enjoying some quality time at the cottage this summer! Oscar nominee Patricia Clarkson (who turns out to be a real badass with a shotgun) finds her trip to cottage country turned upside down in October Gale, the new thriller from director Ruba Nadda. October Gale is now on home video from Pacific Northwest Pictures just in time to watch at the cottage this summer (provided you lock your doors!). Answer the trivia below for your chance to win a DVD of October Gale!


Synopsis: Patricia Clarkson stars as Helen, a doctor who is mourning the recent sudden passing of her beloved husband.  She’s retreated to the beautiful and remote island cabin home that they loved, to put his things in order. A series of unexpected events – damage to her boat, and a sudden storm that knocks out power - leaves Helen suddenly completely cut off from civilization.  Then, a small boat washes up on her shore carrying William (Speedman) – unconscious and bleeding from a gunshot wound.  Helen pulls him in and saves him, but now finds herself stranded alone with this unknown and potentially dangerous stranger.

Cinemablographer has two DVDs of October Gale to give away, courtesy of Pacific Northwest Pictures. All you have to do to enter is answer the following question:

Send your answer and full mailing address to contests@cinemablographer.com with the subject ‘October Gale.

*Limit one email entry per person/household per contest. Multiple entries will be discarded and marked as spam.
**Entries that do not include a mailing address may be discarded.
***Limit one win per person per month.
Posted by Pat Mullen at 7/09/2015 09:44:00 AM