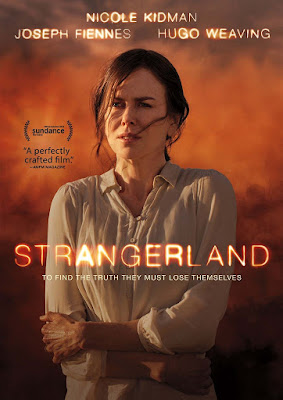 Academy Award winner Nicole Kidman takes on another brave and challenging role in Strangerland! The Sundance hit opens in Toronto this Friday from Pacific Northwest Pictures and then in Ottawa (at The Mayfair!) and Vancouver on July 17. Put your Nicole Kidman smarts to the test and enter to win a run of engagement pass to see Strangerland when it hits theatres!

Synopsis: Directed by Kim Farrant, from a script by Fiona Seres and Michael Kinirons, Strangerland is a riveting drama about a couple (Nicole Kidman and Joseph Fiennes) who are newly arrived to the remote desert town of Nathgari.  The couples lives are flung into crisis when they discover their two teenage kids, Tommy and Lily, have mysteriously disappeared just before a massive dust storm hits. With Nathgari eerily smothered in red dust and darkness, the townsfolk join the search led by local cop, David Rae. It soon becomes apparent that something terrible may have happened to Children. Suspicion is cast, rumours spread and the town begins to turn against the Parkers. With temperatures rising and the chances of survival plummeting with each passing day, Catherine and Matthew find themselves pushed to the brink as they struggle to survive the mystery of their children's fate.

Cinemablographer has one run of engagement pass to giveaway to Strangerland, courtesy of Pacific Northwest Pictures. All you have to do to enter is answer the following question:

In which of the following films did Nicole Kidman star with her Strangerland co-star and fellow Aussie Hugo Weaving?

a) Australia
b) Birth
c) The Paperboy
d) Happy Feet


Send your answer and full mailing address to contests@cinemablographer.com with the subject ‘Strangerland’.

Strangerland opens in theatres July 10th beginning with an exclusive engagement in Toronto at The Royal on July 10th, and then opening on July 17th at Vancouver's Vancity Theater and Ottawa's Mayfair Theatre.

*Limit one email entry per person/household per contest. Multiple entries will be discarded and marked as spam. Contesters caught abusing the system may be prohibited from future wins.
**Entries that do not include a mailing address may be discarded.
***Limit one win per person per month.
Posted by Pat Mullen at 7/08/2015 03:39:00 PM