Only the Crumbs Remain 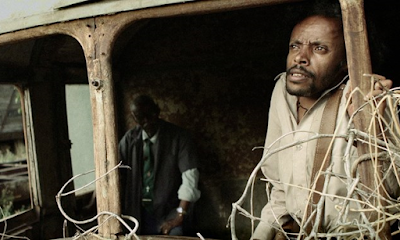 Crumbs takes audiences to a world they rarely get to see on film: post-apocalyptic Ethiopia. This Spanish/Ethiopia/Finnish co-production directed by Miguel Llansó creates a mind-bending world with humble resources and plays upon the notion that one person’s trash is another person’s treasure. The film recycles cultural refuse—the crumbs of past civilizations—as one lone warrior named Candy (Daniel Tadesse) trucks around an old Christmas tree and rummages through the leftovers of previous generations in search of a golden ticket to board the spaceship that looms high in the sky. These crumbs, however, are tokens of cultural junk: toys, novelties, and plasticky things worshipped by kids of the 1980s and 1990s. A Michael Jackson record can pay for Candy’s wedding to Birdy (Salem Tesfaye) or it can potentially blast him into space.


Crumbs leaves a trail of bread nibblings to follow as Candy and Birdy gaze into the atmosphere and marvel at the spinning space-thing that hovers above them. The film features some impressive visual effects that call to mind District 9 in this notable exercise in low budget filmmaking and Crumbs develops a terrifically ambiguous atmosphere by eschewing exposition, context, and, for the most part, dialogue. There’s little narrative of which to speak, besides Candy’s progress towards the ship, and Crumbs gradually develops a rhythm in the pattern of scenes that thrusts Candy, a black Santa, a Nazi, and a spell caster on a collective quest for junk and cultural currency. The film bridges these characters with a wily pawnbroker who weighs the value of the crumbs, but the characters often act as a sideshow of symbolism that works as often as it feels empty. Llansó, however, finds an intriguing lead in Tadesse, who guides the film like an inquisitive observer, while DP Israel Seoane lenses the arid landscape with a similar magnetism.

Crumbs, like some of the best sci-fi, uses the power of the unknown to provoke the viewer to look beyond. There’s a great twenty to thirty minute film in here that doesn’t quite deliver in Crumbs’ protracted quasi-narrative, but the film’s a handsome novelty and an appreciably metaphorical odyssey that uses junk and disposable consumer goods to create a provocative parable for Africa. The starkness of Crumbs makes for attention-grabbing afrofuturism.

Very little holds the film together, though, and Candy’s rhythmical quest meanders and ultimately proves tedious even with a modest running time of sixty-eight minutes. Llansó greatly harnesses the picturesque scenery to create a placid post-apocalyptic world and Crumbs remains visually striking even if it, like Candy, it searches for something elusive. There’s little meat on the plate, but there's enough to pick at even if only the crumbs remain.

Crumbs has its Canadian premiere at Fantasia on July 31 and screens again on August 3.