Love is in the Cards 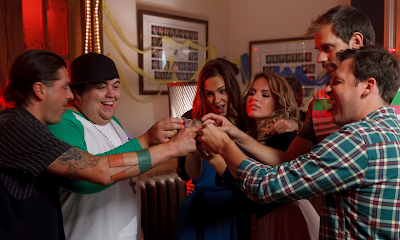 Take a deck of Tarot cards and shuffle them. Draw a few.

Out come The Fool, The Empress, The Devil, and the Wheel of Fortune. They’re all upside down and a bit topsy-turvy, and it takes a legit Miss Cleo to read the links between the cards. The Fool goes by the name of Patrick (André Bharti). The Empress is Mary (Katherine Barrell). The Devil is Ted (Ray Galletti), and The Wheel of Fortune spins them all around in a screwball sex farce of second chances.

Mary finds herself in this predicament of fate and circumstance after she breaks up with Patrick, and then Ted breaks up with her, and then a fortune teller (Royal Canadian Air Farce’s Luba Goy) foretells that she’ll soon reunite with her ex on a chance encounter. It might be a rebound with her ex-ex, though, as Mary bumps into Patrick whilst perusing a record store. They hit up a frat party for old time’s sake and love is in the cards.

My Ex-Ex has a lot of fun with its love triangle of misfortune as Mary’s path crosses with Ted and Patrick alike and she struggles to choose between a match that feels comfortable and a match that feels right. Patrick, a stoner with a dong bong, seemed like the wrong choice during Mary’s law school days, while Ted, now that Mary’s on track for her Life Plan, seems like the sensible choice with his bank account and security even though he’s a total d-bag. The cards don’t tell Mary to choose between the life society want us to have and the life that forges its own path, and My Ex-Ex playfully teases the fates of the cards as Mary weighs expectations and ideals against happiness and good times.

This light-hearted and raunchy rom-com shuffles the deck to complicate Mary and Patrick’s reunion by tossing in a pair of fools, Patrick’s friends Rob (Randall Edwards) and Nathan (Alistair Forbes), a High Priestess in the form of Mary’s saucy friend Sandra (Emily Alatalo), and a Hermit card with Mary’s more sensibly minded friend Becky (Tamara Duarte). These random cards of My Ex-Ex add a different side to the film from the sweeter search for harmony in Mary’s dilemma over choosing between Ted and Patrick. The fun peanut gallery of Mary and Patrick’s friends gives My Ex-Ex many of its highlights and low points alike, as Alatalo steals virtually every scene in her fun, sexy, and sassy turn as the free-spirited Sandra, while Edwards and Forbes find themselves in a lot of scenarios (re: jokes about autofellatio and kids’ balls) that fall flat. The three come together (no pun intended) for the most awkward drunken threesome ever caught on film and, luckily, the actors are just loony enough to make it work. My Ex-Ex is often enjoyably fun in spite of itself.

My Ex-Ex doesn’t always hit the R-rated jokes on target, and the awkward cinematography leaves much to be desired, but it's a fun film for audiences to let their hair out and enjoy as school's out for the summer. The film also works candid and surprising discussions of sexuality into the everyday discussions the friends have over coffee or brunch in a variety of familiar Toronto locations. Topics ranging from masturbation to female ejaculation are all on the table, so Mary’s re-evaluation of her future shows the double standards that are in the cards. Similarly, Mary’s dilemma builds to a climactic wedding à la The Graduate that pits the desire to follow convention against the desire to follow one’s heart as Ted and Patrick vie for her hand in marriage. Neither man every really seems that great a prospect for Mary though, especially Ted, but the charm of the film is our desire to see Mary do anything but settle. Barrell gives a fun and winning performance as Mary while Bharti (who also wrote the film) is good and goofy as Patrick. This mismatched pair of cards shows that the Joker’s still wild in the card game of love.

My Ex-Ex screens at select Landmark theatres on Wednesday, July 8 as part of the Canadian Indie Film Series. (It screens in Ottawa at Landmark Kanata.)

It opens in select cities, including Landmark Kanata and in Toronto at The Carlton, on Friday, July 10.