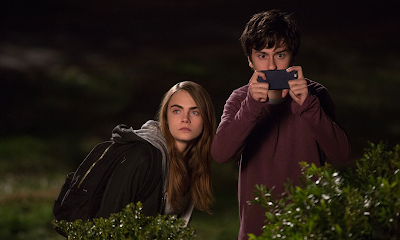 That name probably makes sense, especially since Margo Roth von Spiegelman has this quirk in which she haphazardly caPitaliZes LeTters in hEr pRose becAUsE She thInks lEtTers in the miDdle of a wOrd And/oR Sentence desErve the Upper casE. Cute. The point of the matter, though, is that Margo Roth von Spiegelman isn’t a person: she’s a character, a construct, and a self-conscious construction who exists only to draw attention to the fact of her constructedness.

The faulty logic of Paper Towns never adds up since the film mixes metaphors in this noticeably abbreviated adaptation of the novel of the same name by The Fault in Our Stars author John Green. Towns are paper and Margo Roth von Spiegelman is paper, but nobody sees the real thing because screenwriters Scott Neustadter and Michael H. Weber (who also adapted Faults) whittle away the majority of clues that Margo Roth von Spiegelman drops when she runs away from her home in Orlando, Florida and leaves hints for her whereabouts that Quentin interprets. This lessening of the book isn’t necessarily a bad thing, though, even if the adaptation of Paper Towns doesn’t have much substance. Paper Towns is better than the book, mostly because it doesn’t make one read Green’s prose, as it provides fast and breezy coming-of-age escapism and tries to reveal how everyone lives in self-constructed realities.

This adaptation of Paper Towns zeroes in on the most entertaining part of the book, namely the climactic road trip in which Quentin and his buds Ben (Austin Abrams) and Radar (Justice Smith), along with Margo Roth von Spiegelman’s sort-of-ex-BFF Lacey Pemberton (Halston Sage) and Radar’s girlfriend Angela (Jaz Sinclair), follow the clues to Margo Roth von Spiegelman’s hiding place. (Angela doesn’t get to join the party in Green’s book, so Paper Towns makes an effort to diversify white bread Orlando.) The road trip only gets about fifty pages in the book, but it accounts for half the movie and it makes for fun, broad strokes of harmless humour as Quentin and co. grow up and discover themselves as they try to learn Margo Roth von Spiegelman in turn. Paper Towns is a John Hughes movie on cruise control and that’s perfectly fine. Director Jake Schreier (Robot & Frank) adds a funky indie soundtrack and a winning cameo from Augustus Watters to make the film resonate with die-hard fans of the book.

The book gives readers a damaged, lonely, misunderstood, and potentially suicidal young woman whose fate makes Paper Towns a decent page-turner. Her highlighted Whitman book points to blades of grass as lonely leaves, while Quentin discovers they’re also a metaphor for interconnectedness. Margo Roth von Spiegelman doesn’t really get the literature with which she creates her own mystique, but she thrives on a dream and drive for escape that Paper Towns, the movie, desperately needs for Margo Roth von Spiegelman to be anything other than a one-dimensional spoiled brat who thinks she’s all that and a bag of gluten-free potato chips.

Delevigne lacks the screen presence to make Margo Roth von Spiegelman remotely engaging, while Wolff’s wide-eyed ho-hum shtick makes Quentin even less of a believable character. They’re both quite self-aware yet forgettable performances, which mark the most significant decline for this year’s John Green movie after Shailene Woodley and, to some extent, Ansel Elgort set a high bar by creating dynamic and emotionally engaging leads in The Fault in Our Stars. Abrams and Smith, on the other hand, are fun as Quentin’s buds, although both feel like caricatures of high school movie clichés: Ben’s the token horny virgin while Radar mostly functions to introduce a running black joke. Admittedly, the gag that his parents own the world’s largest collection of black Santas inspires a chuckle, but each punchline hits the aforementioned point home. The closest things to human beings scattered amidst the paper peeps of Paper Towns are Sinclair and Sage, the latter of whom is arguably a star in the making and might have given the film that Margo it needs.

Paper Towns doesn’t bring the full-scale cheese of The Fault in Our Stars, nor does it inspire the same mass catharsis/hysteria, and while one appreciates the lack of sloppy cry-faces at the movies, this film lacks a spark. By the end, Paper Towns leaves audiences with a feel good high school comedy in which Quentin graduates to a different idea of Margo Roth von Spiegelman. She’s still a construct, though, and a variation of an idea that doesn’t come to fruition in a latter-act explanation. Margo Roth von Spiegelman, ultimately, is an elusive figure who might as well stay lost.