Check the Hellions at the Door 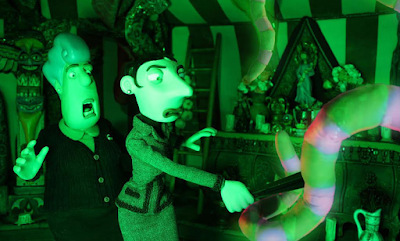 The Spanish animated feature Possessed looks like a kids’ movie, but please check the little hellions at the door. Possessed puts an animated spin on The Exorcist and projectile vomit is the mildest thing that comes out of its mouth. The film features a full-blown hell child, obviously named Damian, and he makes Linda Blair’s Regan look like an angel. This absurd animated film is funny, sick, and twisted.

Possessed draws heavily on William Friedkin’s The Exorcist, but the 1973 classic might actually be better suited for family viewing. If Regan makes parents’ cry “earmuffs” during The Exorcist’s line, “Your mother sucks cocks in hell,” then Possessed demands a collective gasp from parents when Damian calls the maid the C-word and tries to have his way with her. This eight-year-old hellraiser pushes the envelope for animated characters. Damian (voiced by Santiago Segura) turns his head in circles, shakes in his bed, and causes ample frights, but he’s also an ungodly terror who kills folks left and right after his dad, a famed matador, dies mysteriously in an accident and his mom, a famed flamenco dancer named Trini (voiced by Anabel Alonso), falls into a pit of depression and addiction.

Possessed features a bit too much exposition as it chronicles Trini’s rise and fall as half of Spain’s equivalent to Brangelina. This information plays out in an exhaustingly long newsreel sequence that plops itself in the middle of the story that introduces Father Lenin (voiced by Josema Yuste), the priest/exorcist/communist who enjoys a sporadic storyline of his own in between scenes that develop Damian’s reign of terror. The awkward pacing corrects itself eventually when writer/director Sam throws some holy water on the backstory and uses it to drive the plot forward. All it takes is a visit to a crazy old gypsy and Possessed puts a flamenco spin on one of horror’s most popular stories. It’s outlandish, totally un-PC, and a loony riot.

Animation fans have ample reason to cry Olé! Olé! Olé! as Possessed scares up a madhouse of inventive horror/comedy. The atmospheric contrast of cartoonish innocence makes some of Damian’s spells wickedly funny and the mix of stop motion and computer animation creates a simple but smart palette that smudges the scenery with oodles of claylike blood. (The film has a surprisingly high body count.) On the other hand, Possessed also has a demon of mean-spiritedness at its core as Damian wreaks havoc on unsuspecting innocents and creates a smorgasbord of bloody violence that feels gross and graphic despite the fact that it has no pretense to realism. Possessed takes Looney Tunes violence to the extreme, but it’s an entertaining bloodbath at that.

Sam also cloaks the film in so much madcap randomness that the film never takes itself too seriously, which helps the splat-n-chuckle mayhem. Crazy grannies, saggy clay boobs, and risqué humour are all on the menu here, as are a disembowelment, eye-gouging, unfunny sex worker jokes, Rambo-like men of the cloth, and other goodies not meant for minors. The film hits the motherload of randomness when it culminates in a most enjoyable finale that puts a spin of female empowerment on Possessed when Trini and the Devil fight for Damian’s soul. Rather than a good-old-fashioned exorcism, though, the two have a Simon challenge face-off of flamenco and hard rock. The Devil even drops his balls and rocks with his cock out for the grand finale, if parents want more facts of life to explain to their kids. This R-rated ’toon is a devilish delight for mature audiences.

Possessed had its North American Premiere at the Fantasia Film Festival. It screens again on July 24 at 11:55 pm.