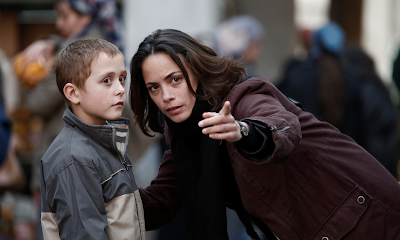 Michel Hazanavicius’s The Search is a lost cause. The writer/director of The Artist follows up his smash sleeper hit and Best Picture Oscar winner with a film that couldn’t be further from the charm and whimsy of his 2011 sensation. It's not quite his post-Oscar Catwoman, but it's close enough. If The Artist is a delightful ditty that reminds audiences of their love for film, then The Search is a protracted bore that’ll have moviegoers wondering why they don’t spend more time outside in the sun. It’s a terrible and pointless film.


Hazanavicius is simply out of his element here as The Search brings The Artist’s Bérénice Bejo (also the director’s wife) to war-torn Chechnya in 1999 as Carole, a human rights worker investigating the terrors of Russia’s “anti-terrorist operation” that raged war against civilians. The Search, inspired by the 1948 Fred Zinnemann film of the same name, lets the director explore the ravages of war admirably and take on a weightier subject than he previous has in films such as The Artist and his wonderful OSS: 117 spy parodies, but sobriety isn’t Hazanavicius’s forte. The Artist and the OSS movies (like The Artist, they’re homages to a different era of cinema) might seem like lightweight exercises in style, but they’re thoroughly enjoyable even if considered as such. Hazanavicius does throwbacks well: he’s a clear cinephile and his previous works show a strong passion for classic cinema that leaps off the screen and delights the viewer. The Search only remotely fits in the director’s oeuvre if it calls to mind a kind of filmmaking from a bygone era.

The Search meanders with three narrative threads that converge at a glacial pace. Carole mopes about interviewing victims and she takes in a stray child, Hadji (Abdul-Khalim Mamatasuiev), as some kind of atonement for her ineffectiveness in the conflict at a bureaucratic level. Hadji, traumatized by the murder of his parents, cannot speak and he and Carole find a form of communication through music and mutual respect. Hadji’s sister, Raïssa (Zukhra Duishvili), searches for him in the aftermath of their parents’ murder. Finally, Kolia (Maxim Emelianov) finds himself drafted into the Russian army when police catch him with a reefer on the street. All the parties see the horrors of war from different perspectives, be they victims, agents of terror, or some combination of the two. Throw in Annette Bening (who frankly looks bored here) as the epitome of the overworked and overtired NGO worker and the aimlessness of The Search effectively underscores the pointlessness of war.

Hazanavicius takes his time pulling the stories together and The Search plods through bleak miserablism as it fixates on poverty, death, gore, and suffering. These grey images are frequently inert and lifeless: misery doesn’t constitute substance and substituting the world of classic cinema with, basically, an Instagram filter called “war-torn Chechnya” doesn’t create a powerful visual palette. Much of the film plays out wordlessly and relies on these images to convey the horrors of war, but The Search doesn’t display the same flare for visual storytelling that the silent whimsy of The Artist does. (The sets and production design create a notable and effective realism, though.) Bejo also struggles to match some of her previous work here (re: the dramatic chops of The Past) as she surprisingly lacks screen presence, although fleeting glimpses show Carole as a beacon of resilience and kindness when Bejo has some silent interactions with her young co-star Mamatsuiev.

The storylines progress with no discernable rhythm, so one often forgets that some characters are even in the film. Carole’s storyline evokes the pace and character of an old-school message movie (wannabe Stanley Kramer, say), but she and Helen talk about the ineffectiveness of bureaucratic paperwork and indifference in flat, declarative, and pedantic tirades that hammer the themes on the nose. It’s a message movie with nothing to say. Alternatively, the thread with Kolia resembles an altogether different movie (wannabe Kubrick, say) as the film evokes the dehumanization of soldiers into the brutal machinery that creates victims at every turn. The scene that pulls together the grainy video images of The Search’s overwrought introduction is actually a smart suggestion of the futile circularity of war, but there’s no excuse that the rambling two hours between the frames should be so pointless.

The Search screened in Ottawa at The ByTowne.
It’s also available to rent/own on iTunes.