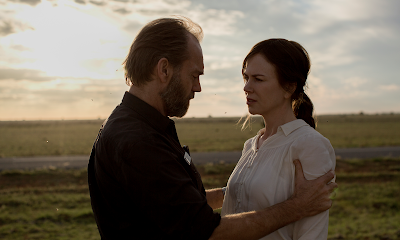 Nicole Kidman is no stranger to the strange and unusual, even in her home and native land. The Aussie actress finds herself in a psychosexual sandstorm in the Australian outback in Kim Farrant’s fascinating drama Strangerland. Kidman gives her best performance since Rabbit Hole as Catherine Parker, the mother struggling through the horrifying experience of losing both her children to the vast and uncertain wilderness. Parker and Rabbit Hole’s Becca Corbett are both mothers in various stages of grief, but Kidman gives an altogether different turn here as Catherine unravels in the sweltering desert heat. Strangerland looks and feels like a science fiction film at times as director Kim Farrant turns the setting that should provide a safe haven for the Parkers into a land of uncertainty and terror, and Kidman is eerie and intimate, a paradox like the setting itself.

Strangerland, which is much better than early reviews as Sundance suggest, mixes beauty and horror sparingly, with the drone of the cicadas providing an overture of unsettling menace in the natural no man’s land of rural Australia. The heat bugs are an ongoing omen in Strangerland since Catherine’s children, Lily (Maddison Brown) and Tommy (Nicholas Hamilton), disappear into the desert one night and fail to return. Tommy likes to go on walks, while Lily’s known to prowl, and neither kid feels at home in the remote town of Nathgari where Catherine and her husband Matthew (Joseph Fiennes) move the family to forget some difficulty with Lily’s past. Lily can’t escape these former incidents even as she remains the victim of a disappearance, and Strangerland unspools the young Parker’s growing sexuality with Catherine’s own repressed feelings. Call it the call of the wild, but Catherine grows looser and freer the more she wanders into the desert in search of her missing kids.

Attribute it to the temperature of the sun or maybe to the heat provided by Detective Rae (Hugo Weaving), the officer assigned to the Parkers’ case. The detective becomes more than a detached party to the case when he and Catherine realize a mutual attraction while mining Lily’s sexual history. Rae, like the Parkers, becomes a victim of his own desire to keep up appearances when he learns that his girlfriend’s brother Burtie (Meyne Wyatt) was involved with Lily and could face a statutory rap, or worse, depending on where the case leads Rae down the winding trail of the bush.

Strangerland creates a bind with the female Parkers’ sexuality as the father and mother take different outlooks on Lily’s disappearance. Matthew nearly reverts to a game of blaming the victim as the scandal of Lily’s promiscuity grieves him more than her actual disappearance does; alternatively, Catherine gradually identifies with Lily’s hunger as she uncovers the secrets of her daughter’s life and recognizes the lie she herself lives. Public opinion quickly turns against the Parkers as more information comes out into the open and the parents’ own erratic behaviour raises more than eyebrows. Strangerland first presents a town that’s warm and inviting—a safe haven of small town living—and pushes its characters to the edge when it seems as if there’s nowhere else on Earth to go if one can’t find peace in a little place like this.

Strangerland provocatively uses the scope and barrenness of the natural landscape as an image for its characters’ psychology. Some spectacular aerial shots weave the sun-scorched desert like a threatening snake, while lens flare, usually a source of eye-catching warmth in movies, assumes a villainous character as it registers another degree of heat that threatens the kids as they presumably remain lost in the wilderness. The film frequently captures the Australian outback just as the sun rises and sets on the horizon, and sometimes it looks as if Kidman and company are walking on Mars. (The orangey explosion of a dust storm in the film is a visual highlight for the terror that rolls into town.) Farrant and cinematographer P.J. Dillon use the alternating warmth and flatness of the sunlight on the horizon for both splendour and terror, as Strangerland uses the ever-growing expansiveness of the desert as a menacing presence. A final act turn throws Kidman into the desert at twilight and it’s the perfect evocation of grief and madness alike as the sun sets on Catherine’s happiness.

Kidman’s the biggest force of nature here though as she creates the mother’s fragile psychology. Catherine finds herself torn between the desires she represses and the brave face she feels she needs. Lily’s escape is on one level her own, and Kidman holds the film together as the Parkers fall into a tailspin. Fiennes’ Parker is clearly uncomfortable with the sexually charged investigation, while Detective Rae brings the aforementioned heat that melts away the truths that Catherine hides. Strangerland asks us to sympathize with this woman who may lose everything, leaves one wondering if Lily, or Catherine, have found a better horizon. Kidman creates an ambiguous cocktail of seduction and grief as Catherine goes further and further into alien territory and Strangerland takes us on a mysterious and unsettling odyssey.

Strangerland opens in Toronto at The Royal on July 10th, and then opens at Vancouver's Vancity Theater and Ottawa's Mayfair Theatre on July 17th.