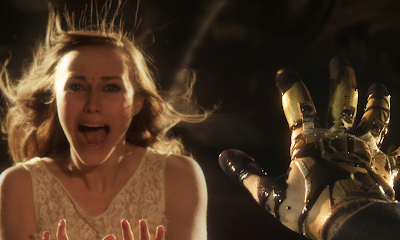 Canada doesn’t have much history with Italian horror, but it does have a firm tradition of strange and unusual films coming out of Winnipeg. Films like John Paizs’ Crime Wave (1985), the films of Guy Maddin, and the collected works of the Winnipeg Film Group root Canada’s cold and dreamy city in a quirky history. One contemporary of the WFG group is the Winnipeg-based VHS and genre-movie loving collective Astron-6, the group behind cult hits such as Manborg, and their latest film The Editor is the culmination of their film geekery. Astron-6 members Adam Brooks, Matthew Kennedy, and Conor Sweeney present this wildly entertaining and sensationally weird Canuck giallo film that might legitimately be one of the strangest films ever to come out of Winnipeg. The Editor lampoons the Italian tradition of splashy/shoddy horror popularized by Daria Argento, Lucio Fulci, and other filmmakers and puts a distinctly Canadian twist on this ultra-violent and super-sexy subgenre. It’s a bloody hoot.


Directors Brooks and Kennedy deliver all of giallo’s signature traits from the stylized graphic violence to the bright colours that splash the screen with intoxicating rays to the buxom beauties to the outrageously crappy voice-over dubbing. The Editor also brings both the best and the worst of homage as some of giallo’s lesser traits (like incomprehensible plots and over-long running times) find a home alongside the greater buffet of juicy flairs that make such films a delight. Film buffs will relish this splat-n-chuckle homage as The Editor does horror spliced and diced in a film stage bloodbath. The film puts renowned film editor Rey Cisco (Brooks) as the loner anti-hero of the pic and he’s an ambivalent observer to the carnage around him as bodies pile up on the set of the latest B-grade slasher that he edits. The victims, mostly sexy starlets and soundstage d-bags, all lose four of their fingers in addition to their brains, heads, etc. and Rey becomes a suspect since he hacked off the same digits in an accident in the editing room during a previous project.

Kennedy co-stars as Peter Porfiry, the detective on the case, while Sweeney plays Cal, the self-infatuated hack actor who lands his big break when the killer cuts his Italian co-star from the picture. The Winnipeggers add a likable Samantha Hill as Rey’s assistant editor, and they assemble some familiar faces to join the party. The Editor lands a kooky cameo from Europe’s signature weirdo Udo Kier as the doctor of an asylum, while Paz de la Huerta is humorously terrible as Rey’s wife Josephine, a former headliner of genre fare who feels jaded about fading out of the spotlight. (Whether one thinks she’s in on the joke is up to the viewer.) The mélange of acting styles gets a wild twist from the filmmakers as they make the ridiculously bad dubbing of giallo an in-and-out character of the film as the leads mix their dialogue in intelligible banter and ludicrous post-production dubbing that clashes monstrously with the actors’ bodies. It’s very funny and while viewers unfamiliar with the original films may miss the jokes or merely suspect shoddy filmmaking, fans in the know may find that the gag never loses steam.

The Editor puts a deliciously cinematic spin on slasher films as the body count rises with hilarious deaths that cut with a film buff’s edge. The film roots itself in a niche of cinephilia—B-movies, horror, foreign cinema, and cult stuff—and Brooks, Kennedy, and company send up the movies that inspire The Editor with a pastiche of love and inside jokes. The Editor could easily pass as one of the works by the directors to which it pays homage as the filmmakers tailor it in details trolled from old VHS bargain bins. The Editor has boobs, butts, and blood galore, but its spot-on grasp of midnight madness ultimately titillates the viewer most.

The Editor uses this tradition of Italian horror to extend a similar legacy to Canadian film itself. The filmmakers pepper the film with nods to Canuck classics with a notably anachronistic poster of Crime Wave adorning the walls of the studio, while Paizs also makes a cameo. The film also roots itself in the bloody film-reference library of horror of David Cronenberg as Rey finds himself on odysseys through the TV that results in Videodrome-like hands coming out of the screen, while a nasty VHS tape similarly breathes and morphs just like it does in the iconic Cronenberg film. The Editor doesn’t feature any exploding heads, but it has a healthy dose of darkly funny violence and crazy sex (even one scene that involves both a birthday cake and a chainsaw) that feels right at home despite its Italian flavour.

The Editor screens at Fantasia on July 31 at 11:55 pm.
It opens in Ottawa at The Mayfair on September 18th.