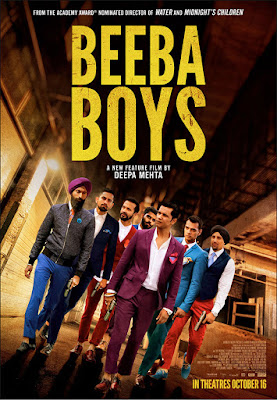 Director Deepa Mehta goes in a new direction in Beeba Boys. The Oscar-nominee for Water and director of the excellent Salman Rushie adaptation Midnight's Children takes a different turn with the urban crime drama Beeba Boys, and Canadian distributor Mongrel Media unveiled the first trailer for the film, which comes to theatres October 16. Beeba Boys stars Bollywood star Randeep Hooda alongside Canuck actors Sarah Allen and Paul Gross with Wes Anderson regular Waris Ahluwalia among the ensemble. Beeba Boys is the final of the Canadian films rumoured to be the TIFF opener to get a trailer (the others are Paul Gross's Hyena Road and Atom Egoyan's Remember). Mehta previously opened TIFF 2005 with Water before going on to be Canada's submission and nominee for Best Foreign Language Film at the Oscars. Any bets on which of the three could be the opener, or is this rumour just a rumour?


Synopsis: Mix bhangra beats, AK-47s, bespoke suits, and cocaine and you have BEEBA BOYS, an explosive clash of culture and crime. Jeet Johar and his crew of young, charismatic men vie to take over the Vancouver drug and arms scene in this ball-to-the-wall action drama. Blood is spilled, heads are cracked, hearts are broken and family bonds are pushed to the brink in this adrenaline charged glimpse into a Sikh Indo gang war. If you wanna be seen, you gotta commit to being seen. Go hard or go home.