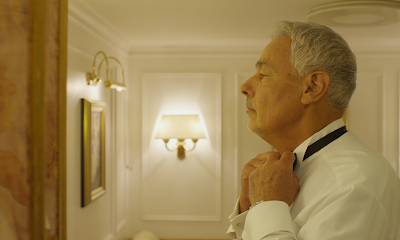 Get your mind out of the gutter. The gigolos of The Last Gigolos aren’t those kind of guys. These gentlemen dance vertically.

The fun and enlightening German doc The Last Gigolos takes audiences on a waltz through the golden years as it chronicles the time that passes for a handful of elderly passengers on the cruise ship The Deutschland. Director Stephan Bergmann introduces two fading gigolos, Peter and Heinz, as they coif their grey hairs and freshen up for the silver foxes onboard the boat. “Just a Gigolo” flows playfully in the background as The Last Gigolo plays with the audience’s perception of the word and assumes that these guys are dirty old men ready for action. They’re really gentlemen, though, smooth operators onboard the boat to ensure that the elderly guests find companionship—they’re simply paid to dance.

The film takes many cues from Peter, who is the more popular, seasoned, and charming of the gigolo gentlemen. He flirts with the ladies and they admire how youthful he looks for his age—74!—and in between sessions on the dancefloor he explains in voiceover how his calm, cool, and collected performance keeps him young at heart while nurturing those around him. The Last Gigolo isn’t about the currency of sex; it’s about the value of companionship.

Bergmann finds an excellent subject in Bärbel, a passenger in her sixties who travels alone and shows the most obvious lust for life that the gigolos aim to please. The film follows her and fellow traveller Barbara, but Bärbel speaks most openly about her wants and needs. Bärbel, a widow, explains how the thought of being alone becomes harder to shake as one ages: she goes bar-hopping in the city, going from place to place in search of a dance partner, but concedes that it isn’t the most socially acceptable thing for a solo lady, let alone a solo elderly lady. On the boat, though, it’s all open flirting and dancing with the comfort (and apparent disappointment) of knowing that the paid hosts onboard have limits they can’t overstep with the ladies.

The film finds a bittersweet love story in the dances between Bärbel and Peter, and the platonic intimacy that grows in their nightly conversations. Maybe it’s because Bärbel throws herself at the men that Peter sees in her a client, or maybe it’s because Peter is one of the only men onboard willing to dance that Bärbel finds a partner in him, but the two build a natural rapport. The film remains respectful of both Peter’s profession and Bärbel’s wants for his services: even fleeting a relationship is better than being alone.

On the other hand, the relatively slighter and late-blooming companionship between Heinz and Barbara takes an unexpected end-credits step. Perhaps the difference between being alone and getting together lives in a state of mind that Peter and Bärbel can’t quite escape. They love their independence too much and they thrive on flirting, so they might favour serial tangos over one long-lasting pas de deux.

The film chronicles life on the boat in attractively shot observations of the aging passengers lounging in deck chairs or twirling on the dance floor. Fans of the Marigold Hotel films or docs like Advanced Style will readily enjoy this fun and respectful look at the quest for love in the golden years. (It playfully anticipates the release of the Michael Caine/Jane Fonda drama Youth with its playful glimpse as last loves.) The film never takes the subjects’ age as fuel for comedy, nor does it invite the audience to judge. Instead, it’s simply a refreshing observation that the search for love never grows old.

The Last Gigolos opens in Toronto at The Bloor on August 14.