Bosnian Oscar Bid 'Our Everyday Life' is Subtle and Symbolic 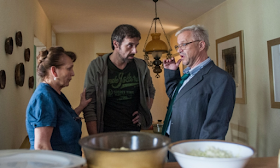 Bosnia and Herzegovina enters the Oscar race with the country’s official selection to compete for Best Foreign Language Film, Our Everyday Life. This quietly observed slice-of-life drama offers a contemporary snapshot of one family and their-day-today life in Sarajevo. Small dramatic acts shape and twist the characters, and their destinies largely mirror by the contemporary history of the city. As the lives of the four family members converge, the subtle and symbolic Our Everyday Life uses poetic realism and compelling characters to create a collective act of healing.


Writer/director Ines Tanović largely keeps the drama understated and the aesthetics without frills, but the film features a ruptured chronology that almost goes unnoticed until one places the opening frame within the larger puzzle. The film begins with one family separating as a man puts on his helmet and kicks his leg over a motorcycle, and leaves behind a woman at table at a nice little café. The blond woman toggles her cell phone and the body that shifts underneath the tablecloth reveals a healthy baby bump. Then she disappears when the film cuts to Sarajevo and enters the home of the Sušić family for a fateful turning point in their lives.

The family Sušić includes Muhamed (Emir Hadžihafizbegović), a cranky 60-year-old patriarch who at first is curmudgeonliness incarnate; Marija (Jasna Ornela Bery), the mother who at first seems like a doormat; and Sasha (Uliks Fehmiu), the middle-aged son who at first seems like a loser for living with his parents at forty. Tanović presents the audience with simple appearances and then she strips them down as Our Everyday Life shows how even the most ordinary people live complicated lives if one gets the proper details and context. Through scenes that build elements of routine with unexpected ruptures, the film asks how a family rebuilds and moves forward in the face of trauma.

Scenes with Muhamed appear like clockwork as he sits with the boys in the barbershop and has a drink. Marija’s days, on the other hand, revolve around cleaning, groceries, and Skype sessions with her daughter Senada (Verdana Seksan), who moved to Berlin with her boyfriend during the war. Sasha, finally, doesn’t do much, but his restlessness is palpable. Everything plays like the status quo until Marija learns that she has cancer and Muhamed and Sasha confront the devastating reality that the mother—the rock and glue that holds them all together—could soon be gone.

Our Everyday Life builds its quiet, understated power largely through the relatable down-to-earth performances of the mother and son, whose relationship is the core of the film. The fine cinematography by Erol Zubčević is restrained and lets the actors carry this character-driven drama. Bery is refreshingly restrained as Marija, who wears her fate with resigned acceptance, but with a private will to fight and endure. From the look on her face when she recognizes the signs and eventually gets the news, Our Everyday Life shows that this mother has had a hard life. She carries a headstrong sense for survival, though, and the film invests one in Marija’s recovery because one sees that the mother is everything that keeps the family from falling apart.

Fehmiu gives an equally strong performance as Sasha, the son whose edginess assumes an allegorical weight when Our Everyday Life reveals the scars he carries from the war. The more Tanović and Fehmiu attribute Sasha’s irritability and directionless to his post-war disenchantment, the more the Sušić son stands in for a generation that isn’t sure how to move forward in the aftermath of an unsuccessful war. Stripped of youth and left a man without experience and job prospects, as well as economic problems that leave him dependent on others, Sasha embodies a generation in search of hope and guidance.

Then there’s Senada, who arrives home late in the picture. Full of energy, life, and confidence through Seksan’s warm performance, the prodigal daughter represents a homecoming. She’s the piece the family needs to heal and repair, and her return brings Our Everyday Life full circle, as this episodic drama extends beyond borders and puts the family in a greater sphere. Senada brings promise for a better future, though, as the family finally seems at peace in the one shot in which they’re all together. Our Everyday Life is a subtly compelling portrait of a family—and a nation—in repair.

Our Everyday Life comes to theatres later this year.
It screens at the Montreal World Film Festival Sept. 2 & 3.