Contest: Win Tickets to see 'No Escape' Across Canada! 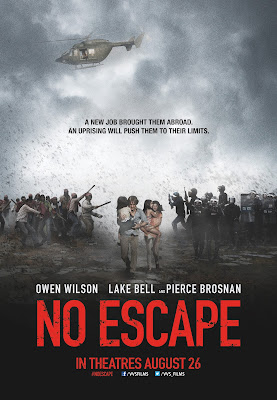 Get ready for an international thrill-ride with No Escape! Owen Wilson stars alongside Pierce Brosnan and Lake Bell in the intense new thriller No Escape. No Escape opens in theatres August 26 from VVS Films, but readers across Canada can attend a sneak peek. Answer the trivia below for your chance to win tickets!


Synopsis: An intense international thriller, No Escape centers on an American businessman (Wilson) as he and his family settle into their new home in Southeast Asia. Suddenly finding themselves in the middle of a violent political uprising, they must frantically look for a safe escape as rebels mercilessly attack the city. Directed by John Erick Dowdle and written together with his brother Drew, No Escape stars Owen Wilson, Pierce Brosnan and Lake Bell.

Cinemablographer has five (5) pairs of tickets to sneak peeks of No Escape in Ottawa, Calgary, Edmonton, Halifax, Montreal (screening is in English), Toronto, Vancouver, and Winnipeg on Thursday, August 20, courtesy of VVS Films. All you have to do to enter is answer the following question:

Send your answer and full name (required for a guest list) to contests@cinemablographer.com with the subject ‘No Escape – [CITY]’.
~Don’t forget to change your city!~

No Escape opens in theatres August 26 from VVS Films.

*Limit one email entry per person/household per contest. Multiple entries will be discarded and marked as spam. Entrants caught abusing the system may be prohibited from future wins.
**Entries that do not include a city and/or name may be discarded.
***Limit one win per person per month.
Posted by Pat Mullen at 8/08/2015 11:20:00 AM