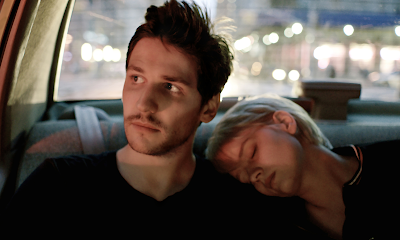 The Butabi brothers meet Llewyn Davis in the EDM drama Eden, and co-writer/director Mia Hansen-Løve spins a broken record with this film about music lovers who can’t quite keep the beat. Like folksman Llewyn, electronic dance music DJ Paul (a forgettable Félix de Givry) is that unfortunate artist who falls short of fame. Whereas Llewyn plays just a set before Bob Dylan and barely becomes an afterthought in music history, Paul struggles in the shadows of hit EDM guys Daft Punk and never spins to the top. Like the Butabis, however, Paul’s a loser who thinks the party keeps going long after it’s stopped. So too does Hansen-Løve, as Eden spins a serpent on its turntable that swallows itself.


There’s a great movie in here somewhere amidst a bloated running time filled with pretension and pulse-pounding music that ultimately rings false even if the heart of Eden is pure truth. It takes guts to tell a story about talented individuals and their failed efforts to live their dreams, but it asks a lot of the audience, too, to care about a character who simply isn’t that likable or interesting. The film is timely as it charts a failed coming-of-age tale as Paul, like many late-twenty-to-thirty-somethings nowadays, refuses to accept the fact that life is a disappointment and that his years of education were all for nothing. The music Paul plays—derivative stuff that makes Eden play like Dance Mix
’95: The Movie—creates a beat that drives on and lets Paul—and sometimes the audience—get lost in the hypnotic haze of synthetic rhythms. Hansen-Løve certainly knows how to assemble a playlist and her sound team really knows how to layer a track.

Eden firmly plays like EDM, however, the beat loses itself in its own monotony. The pacing is slow and the film meanders in overdrawn episodes that don’t sufficiently make use of the few talented actors, although Hansen-Løve gives Arsinée Khanjian some moments to shine amidst a mostly bland cast. To the director’s credit, though, she sharply re-creates the tired, lost subculture with her apathetic ensemble. The film looks gorgeous and sounds electric, but Eden is a song of funky beats and tired notes.

Eden screened in Ottawa at The Mayfair.

EDEN (Trailer) from filmswelike on Vimeo.