Everyone Needs a Little Guidance 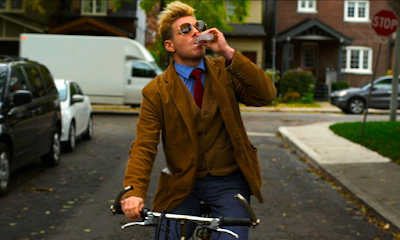 Everyone needs a little guidance, so local filmmakers searching for inspiration should look to Ottawa native Pat Mills. Mills, an ex-pat of the 613 now living in Toronto, makes his solo feature directorial debut with the upbeat black comedy Guidance. This Toronto-shot film boasts a great sense of character as Mills plays an actor moonlighting as a guidance counselor at a Parkdale high school. There’s a little bit of a bad teacher in everyone, but Mills’ saucy substitute is no rotten apple.


“Let’s do a shot,” says David Gold (Mills) to one of his students. David, an actor, gives this advice as he plays the role of guidance counsellor Roland Brown to make some quick cash for the rent, but he seems like the last person fit to provide guidance to teens. He’s an alcoholic actor who can’t hold down even the lowliest of voice-over roles (usually because he’s too drunk before noon) and he's about to lose his crappy apartment. He also denies his sexuality, since everyone but David thinks he’s gay—and Mills’ colourfully flamboyant performance makes David a walking finger snap—and he pays no heed to the skin cancer that marks his arm. Oh, and he lives in the shadow of his former life as a child star on TV. (A ballsy play on art-imitating life, since Mills is a former child star of You Can’t Do That on Television.) There's enough pressure to find success at thirty, even more so when one peaks at thirteen. No wonder his favourite advice in the guidance office is to say cheers.

In the office, David/Roland gives students a push where mentors usually raise a flag. He encourages students to own their sluttiness, or to go for the easy lay, or he’ll even test the weed of an expelled student before finding a better school in which the student may thrive. He becomes the most popular teacher in the halls by aligning with the kids and not the grumpy faculty. As David tells another of his students, “I think this world is pretty shitty, and if you fit into it, you must be pretty shitty too.” He’s a misfit and an outsider. More than any of their teachers or parents, David knows what it’s like to fail to conform and feel inadequate for being a black sheep.

Maybe David is actually the right person to guide these students since he shares their anxieties. Even one of the fellow teachers at school seems intent on dragging David out of the closet, since the actor can immerse himself in Roland’s dorky clothes, but can’t hide his “gay voice” or flamboyant sparkle. David hilariously avoids confronting aspects of himself with the help of various coping devices (re: booze and more booze), and the actor finds himself playing two characters—Roland and David—who both need allies. Mills contrasts this awkward head-to-head between David and his colleague with a storyline in which Roland takes a struggling student, Jabrielle (Zahra Bentham), under his care. This thread with Jabrielle takes the film in an unexpected direction as David hits his stride by recognizing signs for help that he fails to see in himself. The pair of misfits band together like Bonnie and Clyde and their escape from the school leads to the revelations that both David and Jabrielle need.

Mills makes a promising debut in his first solo effort as writer/director. (He previously co-directed the feature Secondary High and has a handful of shorts in his credits.) This consistently funny and charming dark comedy plays with our conceptions of success and normalcy, but while Guidance celebrates those of us who take a different path, Mills avoids cynicism. The film takes the path of acceptance and uses the absurdity of David’s charade to normalize the eccentricities that make us who we are. It’s a warmly funny film despite the dark humour and sadness that underlies David’s sessions with the students. A funky indie score keeps the atmosphere light when the action grows dark, and balances the satirical tone of this lo-fi satire.

If Guidance shines thanks to Mills’ hand behind the camera, though, it’s most memorable for his gutsy turn as the flamboyant, dorky, and endearing David. This larger-than-life performance gives Guidance just the right spunk to suspend audiences’ disbelief, but also to invite viewers to embrace the misfits of Guidance for who they are. This more outrageously David encourages them to go against the grain, the more Guidance professes an affinity for people who see through the bullshit and take pride in their uniqueness. This heartfelt dark comedy re-introduces a voice that’s right at home in a league of offbeat intimate filmmaking.

Guidance opens in Toronto on August 14 at TIFF Lightbox.