'My Love Will Not Let You Down' 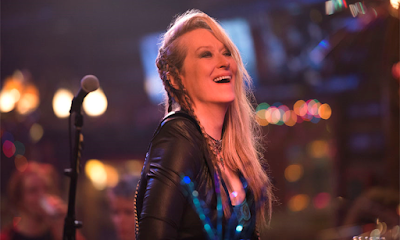 My love will not let you down, Meryl! Even a die-hard Streep fan approaches Ricki and the Flash with a degree of trepidation—can the sixty-six-year-old three-time Oscar winner really play a rocker?—and one has to admit that Meryl looks both sexy and strange decked out in hot leather, funky pants, and a wild ’do of side braids. Any worries, however, quickly drift away as soon as the film begins. Meryl Streep gives one of her most unexpected and surprising performances as aging rocker Ricki Randazzo and she belts out some of the greatest rock songs ever written with enough gusto to share the stage with Bruce Springsteen. Ricki and the Flash, perhaps more than anything the actress has done in her continually impressive career, proves that Streep can really play any part that comes her way.


Streep is no stranger to singing since the opera-trained star has showed a knack for Broadway tunes (Into the Woods), country ditties (A Prairie Home Companion), soulful ballads (Silkwood), and the blues (Postcards from the Edge). She’s versatile, all right, but her voice is even better suited to rock than it is to presumably showier stuff like Mamma Mia. Meryl rocks as Ricki.

Ricki (née Linda) is a sixty-something wannabe rocker who never quite made it, but still dreams big. Rick and the Flash introduces Ricki’s lofty dreams of stardom with a great opener in which Ricki and her band The Flash, which features Rick Springfield on guitar and Joe Vitale on drums, as they rock out on stage to “American Girl” and Ricki revels in the thrill of performing. Cut to the reverse shot, however, and she’s singing her heart out to a dozen or so regulars in a dive bar. Then she leads the band in a funky rendition of “Bad Romance” because the younger crowd wants to hear some current stuff. Streep’s take on Lada Gaga is a hoot, but for Ricki, this resigned yet spunky number is the lowest point of pandering.

The film tackles the question of what makes a woman successful in her family and career as Ricki confronts the disappointments of her life when her daughter Julie (Mamie Gummer, Streep’s off-screen daughter) falls hard after a divorce and needs her mother’s care. The film reveals that Ricki left her family to pursue her dream of being a rocker, but now that she works at a grocery store to support her side gig at the dive, her trip to see Julie at the swanky home of her ex, Pete (Kevin Kline) is a cold wake up call. Julie’s initially frosty to mamma and Ricki’s sons Josh (Sebastian Stan) and Adam (Nick Westrate) aren’t especially pleased by this homecoming, either.

Ricki and the Flash smartly explores the different challenges and expectations that women face as they strive for success in their personal and professional lives. The script by Oscar winner Diablo Cody (Juno) and the direction by Oscar winner Jonathan Demme (The Silence of the Lambs) lets the power lie in the relationships between the family members and in the subsequent subtext of Ricki’s musical performances as she weighs both sides of her life. Ricki gets a feisty speech about how leaving home to cut an album—the only one of her un-illustrious career—makes her a bad mom while Mick Jagger makes it big dropping kids wherever. Even if this speech is a little on the money, the film makes it sincerely clear that the world of a mother-rocker differs from that of a father-rocker. On the other hand, Ricki’s off-the-cuff quip pulls her relationship with guitarist Greg (Springfield) into the large, dysfunctional family of the rock mamma.

The film seeps the mistakes and choices that Ricki made into deft musical numbers that take classic rock hits and play them unlike viewers have ever heard before. Credit goes primarily to Streep for channelling such strong emotional depth into songs that have been covered more times than one can count. Songs like “American Girl” and “I Still Haven’t Found What I’m Looking For” strike chords of fire and regret into Ricki’s musical performances as she reflects upon the family memories she’s sacrificed for a career that’s in her blood.

Streep and Ricki and the Flash exhilaratingly pull the audience into the passionate fight between Ricki, her family, and her music by intensely conveying the emotions and experiences that an artist pours into her work. Streep’s performance of “Drift Away” easily stands as the centrepiece of the film as she echoes love lost with a natural, uncontrived song that strips her bare before the audience. The film’s original song “Cold One” appears both as a stripped acoustic number, a heartfelt dramatic turn in the film, and as a grand finale. Similarly, a climactic performance of Bruce Springsteen’s “My Love Will Not Let You Down” offers the kind of moment that gets audiences on their feet and puts tears in their eyes. Meryl Streep is rock concert that always plays to eleven. One really gets to know Ricki through the pitch and timbre she inflects on familiar songs and her Ricki has as much nuanced complexity as, say, her precisely thunderous Margaret Thatcher or steely Miranda Priestley. The best musical performances are those in which the emotions of the artist shoot from the performer straight into the viewer, and Streep uses just the right amount of subtlety in the film’s dramatic moments to let Ricki’s electric performances hit the viewer with full force. This film really sneaks up on you.

Just like Ricki needs her band to bring out the best in her, so too does Streep make wonderful music with the film’s strong ensemble. Klein is prickly fun as Pete, while Springfield is an unexpectedly affective screen partner for Streep, and Audra McDonald adds a fierce supporting turn as Maureen, the mother who took care of the family in Ricki’s absence. Gummer is the film’s revelation, though, as her sharp and sarcastic yet movingly devastated take on Julie offers the best showcase of her film work to date. As much of a thrill as it is to watch Meryl rock out, the best electricity of the film comes when Streep shares the screen with Gummer: when Ricki rekindles her maternal bond with Julie, one sees the younger actress prove herself a great actress in her own right.

Ricki and the Flash marks one of the rare cases in which Hollywood gets it right on all fronts. The film is warm, funny, moving, and inspiring, but also shot without a fault by Demme, who shows again that he’s no stranger to the perfectly made film that defies Hollywood complacency. It’s refreshing to see so much effort go into making a mature summer movie. Ricki and the Flash is the best studio film so far this year and it offers just the rebound Sony needs. Ricki has more gloss than Demme’s Rachel Getting Married, but it never panders. Cody’s smart and funny script carries her signature saucy bark (jokes about Ricki’s “steel wool” and the like) and it provides strong, well-developed characters from Ricki right down to the smallest roles. The film succeeds because it invests the audience so much in the stakes of this family with Streep singing her heart out at the centre. Encore! Encore! Encore!

Ricki and the Flash is now playing in wide release.