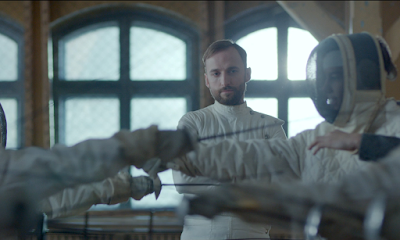 Finnish filmmaker Klaus Härö goes five for five with his fifth straight submission to the Oscars. Härö directs this year’s Finnish submission for Best Foreign Language Film, The Fencer, and this accessible, crowd-pleasing drama could prove to be one of the dark horses of the race. The film has yet to screen in North America, but Oscar’s stamp and an inspirational tale makes this sturdy post-war sports drama a prospective hit for future film festivals catering to European fare.


The film stats Märt Avandi in a resilient performance as Endel Nelis, an Estonian fencer on the run from the Soviet secret police in early 1950s’ Leningrader. He escapes to the remote Estonian town of Haapsalu and lands a position as the Phys-Ed teacher at the local school thanks to his skillful mastery of fencing. Amidst the comfort of this safe haven, however, Endel finds that the children are running from their own sort of demons. This observation inspires him to found a fencing club, which proves to be a booming success. He thus starts an army of his own by teaching the kids how to say en garde and become strong fighters in a duel.

The kids gain an instant spark of confidence as they learn the fancy footwork of fencing and Endel gives them an afterschool outlet in which they feel safe and strong. The classes prove an especially empowering task for Endel’s student Jaan (Joonas Koof), a restless boy who lives with his mother and grandfather and comes to see Endel as a kind of father figure. Through Jaan, Endel sees the significance of the fencing lessons as more than mere sport. Like Jaan, many of the students in Haapsalu lost their fathers to the war and are orphans of the Russian Occupation. By sharing his passion with his students, Endel becomes more than a teacher and mentor to the kids: they look up to him like a father.

The teacher/student dynamic builds an effective parable about a generation rising from the ashes of post-war conflict and becoming strong warriors to rise up against their oppressors. The Fencer inevitably builds to a climactic competition in Leningrad that sees the Haapsalu team as a band of underdogs ready to come back and prove that the Estonian spirit endures in the next generation. The match unfolds tensely, as the script by Anna Heinämaa intertwines the sequence of events with Endel’s past catching up to him in the city from which he fled.

Endel’s past adds an underlying tension to the film as his mystery unfolds as the students become stronger and more inspired, which raises the eyebrow of the school’s principal and leads him to investigate Endel’s past. This research brings more arrests and more deportations of the students’ guardians to the camps, and makes Endel’s role in the community more vital even as his safety becomes less secure. As the two storylines lead to a showdown in the gold medal game, and Endel risks everything for Estonia’s children, The Fencer handily delivers the inherent symbolism in the sport. This is more than just a game: it’s a defiant affirmation of life in the face of adversity.

The Fencer plays a familiar face-off as it pulls together an army of battle moves from sports dramas and post-war thrillers alike, but Härö keeps the pacing suspenseful and the mood inspirational. This underdog tale gives plenty of worthy competitors to root for, especially since Avandi and the troupe of young actors (particularly Koof as Jaan and Liisa Koppel as the wily student Marta) hold their own against their smart teacher. On the other hand, an underdeveloped love story with Endel and a villager named Kadri, played by Ursula Ratasepp, adds little romance, but it pieces together both threads for a finale that pulls heartstrings as Kadri shows Endel the legacy of his victory upon his return to town.

Crisp and fluid cinematography by Tuomo Hutri lends a golden hue to the fencing lessons and keeps the mood light on its feet while the score by Gert Wilden is classically rousing, for Härö’s direction favours the optimism of the story since so much darkness precedes it. It’s hard not to find oneself taken by the inspirational heft of The Fencer as Endel and his students go for gold. The film lunges and taps the heart for a game-winning point.