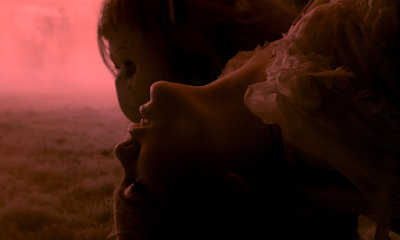 “No animals or demons were harmed during the making of this movie,” read the final credits of Bruce McDonald’s Hellions. McDonald returns to horror with a nod and a wink after delivering one of his best films in the revisionist 2007 zombie film Pontypool. Hellions has a high standard to uphold, and while it might not be Pontypool, this Halloween horror flick lets McDonald keep his status as Canada’s coolest filmmaker. Hellions plays with the icon of the Final Girl with a mix of monstrous mommyhood as teen mom to be Dora (Chloe Rose) gets some unexpected news—and visitors—on Halloween night. The kids are up to no good this Halloween as Bruce goes smashing pumpkins.


The hellions land on Dora’s doorstep just after her mom, played by Rachel Wilson (yes, Rachel Wilson is playing the mom… feel old, Breaker High fans!) takes Dora’s little brother trick or treating and leaves Dora to man the candy bowl. As Dora readies for a party and munchies honey-coated salty pickles (an accelerated sign of pregnancy, no doubt), she dons a frilly white prom dress and her mom’s prized Prom Queen tiara. Ready for the ball, she’s a regular Carrie White waiting for blood.

The action happens fast as a creepy little kid comes to the door in a sack-hat borrowed from The Orphanage and demands candy. (Kids are brats, but three cheers for those who appreciate subtitles at an early age.) This kid, though, just keeps coming and coming, and he soon brings a band of hellions and that smashes Dora’s mom’s giant collection of Jack-o-lanterns to smithereens. Worse, he imprints his pawprint—a bloody, gnarly excuse for a hand—on Dora’s belly. They’re coming for the baby.

Pickles make an ominous sign for Dora’s night as Hellions takes a speculative twist and Dora’s baby grows and grows. The girl hiding from the killers is usually virginal, not pregnant, and she’s often escaping a man with a giant pointy thing, not a bunch of rug rats, so Hellions spins familiar tropes of horror on their heads to trick the audience at every turn and leave some treats to satisfy their cravings. Rose is strong in a role that mostly calls for physical reactions—Hellions has little dialogue—and she writes ample terror on her face as her fantastically quick gestation period takes her on a thrill ride from Juno to Rosemary’s Baby in one terrifying evening.

Dora enlists the help of her gyno (Rossif Sutherland) and the local sheriff (an effective Robert Patrick in Stephen McHattie mode) to thwart the tricksters, but these kids know their rules of horror far better than the grown-ups do. The night quickly devolves into a fever dream of Halloween horrors as the hellions torment Dora and try to rip the ever-growing fetus from her womb. McDonald ups the ick factor by offering CGI inserts of Dora’s insides, and the thing is an entity that few parents could love as Dora’s hallucinatory visions portray her baby-to-be as something akin to the Eraserhead baby. Hellions mutates the image of the Final Girl in a rape culture parable in which Dora’s body becomes an object to be pillaged by the children of the night. Everyone has a claim over her body, or an idea of how she should use it, which victimizes her no matter how hard she fights to protect her baby and her body.

From a blood-soaked bathtub and utterly haunting image of Dora suffocated by a white sheet, the film puts Dora through unrelenting psychological and physical pain, but with a purpose. Like Maude Michaud’s gut-wrenching feminist horror film Dys-, Hellions creates cringe-worthy body horror as Dora take she rights over her body into her own hands. The extreme violence of the finale is a shocker—and thankfully so—after Dora battles the hellspawn long into the night. What a night McDonald creates, though, as Dora wakes up in a surreal reverie that looks like the world as a blazing inferno. McDonald and cinematographer Nora Kasper drench the film in pink-ish hues in which everything looks bathed in blood. Stylized as an ominous intoxicating fever dream, Hellions puts Dora in a psychological limbo, shifting place and time as she loses control of her mind throughout the night.

The script sometimes proves disorienting, but McDonald’s style and hand for black comedy balances out the goody bag for a fun night of Halloween horror. Hellions has a most delicious sense of humour as Dora and the creepy kids battle it out in a never-ending pumpkin patch in which the big orange gourds explode at random and pepper the neighbourhood in a dreamy specs of festival terror. The film, shot in Waterford, Ontario, which is (by its own measure) the Pumpkin Capital of the World, makes perfect use of its quaint setting to stage a playfully ominous Halloween night. McDonald is the Pumpkin King!

Hellions opens in select theatres and screens on iTunes beginning Sept. 25.
It screens in Ottawa at Landmark Kanata.