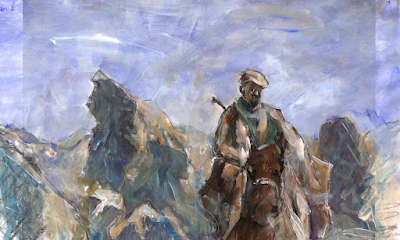 Let the power of animation take you around the world in The Magic Mountain. This exquisite and unique animated docu-drama travels the globe as it chronicles the life story of Adam Jacek Winker, an extraordinary man who survived various wars throughout history. The film knows no borders as director Anca Damian makes the inspired choice to convey Winker’s story through a multitude of styles as diverse as the countries Winker travels. The stunningly composed film is a feat of animation in every sense.


The worldliness of the film is readily apparent in Winker’s tale as he narrates his life’s story in conversation with his wife Anna. The late subject’s voice comes thanks to some handy work by Christophe Miossec in the French version (the one in which this film was reviewed) and  Jean-Marc Barr and Jerzy Radziwiłowicz lending their voices to the English and Polish versions, respectively, while  Lizzie Brochère and Julia Kijowska voice the French/English and Polish versions. Winker tells of his experience witnessing Nazism during his youth and horrible massacres by the Soviet Army in his native Poland. Both episodes are harrowingly realized. He then escapes Poland and eventually lands in Afghanistan where he joins the Afghans in the fight against the Soviets.

It’s here in Afghanistan that the various techniques mix to find their meanings. Styles blend and swirl as Winker becomes a mass of contradictions—cynical, yet naïve; brave, yet brash—and the complexity of the film raises a multifaceted portrait of its subject. Then, when Al Qaeda strikes America on 9/11, his ideals crumble and he once again seeks solitude in the titular magic mountain, which promises a place of tranquility, serenity, and closure.

The Magic Mountain promises the most animation you’ll get for your money at this year’s Ottawa International Animation Festival, where it has its North American Premiere. The film mixes 2D animation with paint, pastels, Claymation, paper cut-outs, and a variety of others techniques to tell a worldly story. Virtually every approach to the art form appears save for that which requires 3D glasses, and it’s impossible not to watch The Magic Mountain and simply be in awe of the scope of the work, the range of the technique, and the overall mastery of each form. It helps, too, that The Magic Mountain employs some of the field’s top animators—Theodore Ushev, Sergiu Negulici, Raluca Popa, Dan Panaitescu, and Tomek Ducki—all of whom bring their own unique voice to the film.

For a second, though, it seems as If the refusal to keep a consistent tool for creating Winkler’s story betrays a lack of focus. However, such a thought becomes fleeting because the approach builds the multitude of forms to show that there is no exact and definitive way to tell a story. No perspective holds privilege. No singular voice has authority. It’s a bold and beautiful approach—magic, even.

The Magic Mountain screens as part of the feature competition at this year’s Ottawa International Animation Festival.