'When Will She Be Back?' 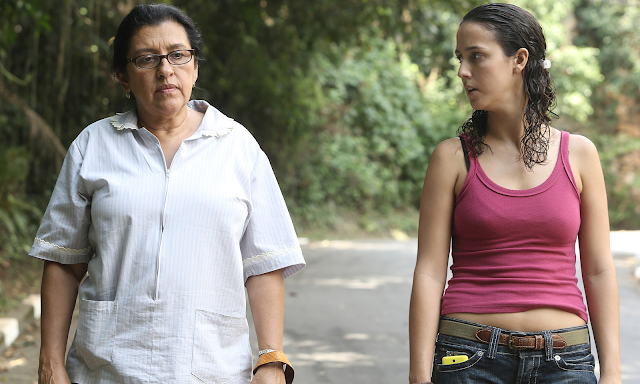 “When will she be back?”

The question arises in The Second Mother, whose original Brazilian title is actually the aforementioned question, after Val (Regina Casé) tells Fabinho (Michel Joelsas) that his mother has gone out. Val isn’t Fabinho’s biological mother, for she is his maid and nanny, but she acts as his true maternal figure and comforts him in his endless abandonment. Fabinho’s mother, Bárbara (Karine Teles), is a successful power driver and entrepreneur—she represents contemporary feminism as she builds a hefty empire and works very hard to produce results. The difference between Fabinho’s real mother and his second mother, however, is that Bárbara has the luxury to leave for work and see her son when she comes home. Val, a member of the lower class, hasn’t seen her own daughter in a decade. “When will she be back?” is thus a loaded question that baits the drama to come.

The mother/daughter reunion happens quickly in The Second Mother when Val receives news that her daughter, Jéssica (Camila Márdila) is coming to São Paulo for school. Val, excited to see the daughter she’s been missing and supporting from afar, nervously asks Dona Bárbara if Jéssica may stay in the servants’ quarters. Dona Bárbara agrees—she happily agrees, actually—and even offers to get a fine mattress for Jéssica to use as a bed. The servant/master relationship lives harmoniously in Dona Bárbara’s house (with the Dona/’Mrs.’ Title appropriately noting rank, class, and distinction) and reflects a larger cultural class structure in Brazil in which the fairer citizens take a stand of privilege over their more darkly skinned countrymen.

When Jéssica comes to stay with her mother, she’s flabbergasted by numerous circumstances of Val’s life. A dinky servants’ quarters? A cot on the floor? Different ice creams for ‘us’ and ‘them’? No ‘rats’ in the pool? Jéssica, ever the rebellious teen, arrogantly tests the limits of Bárbara’s hospitality by inviting herself to stay in the guest room, and then mirroring the family’s own behaviour in an effort to break down the divide.

What makes a person so insecure in the world that she lets others treat her as below them? The Second Mother asks this question before answering it in turn as Muylaert offers a hopeful message as characters advance by their own will, effort, and ability to see through the wall. However, those who remain cozy in their privilege remain at a standstill and lose what others gain.

Writer/director Anna Muylaert delves into this deep-rooted social system in The Second Mother and interrogates how strongly the ideology lives in both Bárbara and Val. Bárbara’s a bit of a snooty one, while Val is doubly mortified, not only by Jéssica’s arrogance, but by her ignorance of the unspoken hierarchy that divides the home into two radically different worlds at the kitchen wall. The film uses the spatial relations of both the house and the frame to create different social orders and build considerable tension for Val as she navigates the roles of maid and mother while respecting the borders of the house. The way space defines and controls Val is an especially fine stroke of direction.

Testing the strength of this wall and its foundation bit by bit, The Second Mother pushes Jéssica into scenario after scenario that frames her and her mother as second-class citizens in their own home. The delicately scripted and precisely directed domestic drama interrogates the longstanding system and ultimately breaks it down. The film recalls 2011’s The Help with its dramatization of deeply internalized structures based on class and colour, but The Second Mother rejects any of the colourful sugarcoatings that make The Help such a sweet, if problematic, affair. Muylaert avoids large emotional payoffs and The Second Mother firmly sidesteps sentimentality. The film offers a happy ending, but it invites the audience to linger, rather than leave light on their feet.

The Second Mother, which is Brazil’s official submission to compete in the race for Best Foreign Language Film at the 2015 Academy Awards, lets the strength of its characters carry the rippling allegory that sees one household as a microcosm for the nation. Casé gives an excellent and understated performance as Val, a woman who knows her place and sadly accepts it. The maid’s love and devotion to both her children, Jéssica and Fabinho, makes the class divide especially effective as The Second Mother shows the arbitrariness of drawing distinctions between countrymen, neighbours, and even family members for the sake of tradition. This belief doesn’t hold with the upcoming generation, though, as Márdila and Joelsas are far more liberal in their performances. The kids are loose and relaxed compared to their uptight mothers—Teles is especially good at playing the uppity Bárbara—and the film uses Val’s anxiety to uphold the very standard that reduces her as a compelling point of wonder. This wonderfully acted film is simple, yet complex as one mother nurtures children from two very different worlds. Whether Val can ever go back, however, is another question.

The Second Mother screens in Ottawa at The Mayfair.