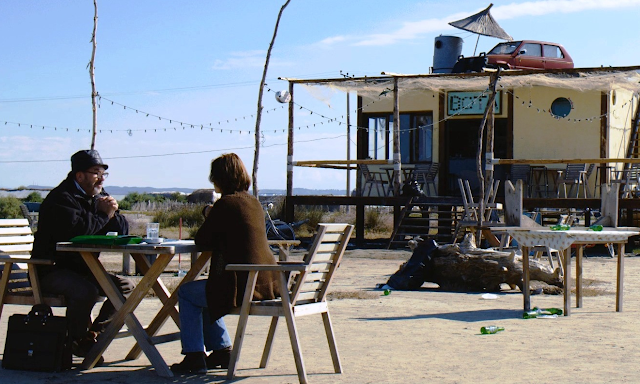 Albanian films are few and far between, and that’s a darn shame if they’re anywhere near as good as Bota is. Bota is Albania’s official submission in the Best Foreign Language Film race for this year’s Oscars and while it might be a dark horse at best, it’s a great example of the Oscar derby giving marginal films a platform for exposure. Bota is a hidden gem worth discovering.


The skeletons come out of the closet—literally and figuratively—as café owner Juli (Flonja Kodheli) confronts her past while passing the time at the vacant roadside dining hole of Bota café, which sits atop a former site of communist exile. Her cousin, Ben (Artur Gorishti), works beside her and harbours an awful secret about the past while juggling an affair with their employee, Nora (Fioralba Kryemadhi), far less discreetly as they take some quickies in the back seat of the hatchback that randomly sits atop the café. The whole place shakes and squeaks as the red sedan’s a rocking, much to the peril of the man who sleeps under the café. (Another random.) The winds of change creep towards Bota café and the former site, though, as new roads expand towards the café, which sits like an oasis on a hotbed of death and bad memories.

This quirky and offbeat black comedy finds humour in the unlikeliest of places, but Bota never takes its context lightly. Writer/directors Iris Elezi and Thomas Logoreci deliver a film deeply rooted in place and character as the trio of employees at the remote café find themselves swept up in peculiar turns of events. Nothing especially out of the ordinary lingers through the air, although an odd little dancer near Bota café suggests the atmosphere is a bit off. Rather, the spirits of communism linger as Bota café sits near a haunted swamp where countless people disappeared when they were exiled to the site during the communist rule.

Ample credit belongs to Ramiro Civita, who serves triple duty on three of the films strongest assets, its cinematography, editing, and score. The film is gorgeously shot even if the area surrounding the café is nothing but dust and flat land, for Bota uses the relationship with characters, place, and space drolly and effectively with sparse editing and music effectively conveying the lingering horror of the land without missing a comedic beat. The three leads, meanwhile, are very funny by playing their roles straightly and seriously. By contrasting their eccentricity within the barren wasteland of the site, their actions seem humoursly out of place and out of character at a site that looks as if it hasn’t seen laughter in years.

Bota is offbeat without being coy, quirky without being naïve, and dark without being heavy. Elezi and Logoreci remarkably balance a complex tone of darkness and light. Through subtle gallows humour and a perversity of wit, Bota confronts the ghosts of the past and asks how, if ever, one can move forward when death is always present, even implicitly, and when trauma constantly returns to the surface. The film uses Juli’s complicated predicament especially well as she finds herself faced with layer upon layer of betrayal as generations of lies twist her fate and bring more death to Bota.

There’s a defiant urgency within Juli, though, that breaks from the site’s cycle of death and misery. The humour of the film, which is sharp and subtle, ensures that a spirit endures even when the land seems barren. If nothing grows at Bota, perhaps the best option is to leave. The cocktail of exile and escape/drama and escapism interrogates these layers of history and laughs in the face of adversity. Bota is very funny in its own strange way as the fireworks soar and the bizarre little lady dances long through the night. The film is an oddity—and a welcome, refreshing one at that.