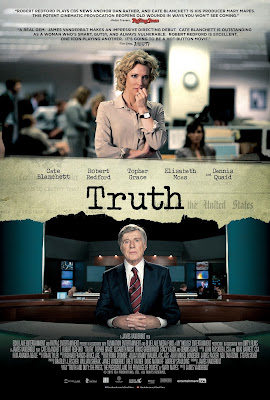 Cate Blanchett delivers another award-calibre performance in Truth! (TIFF review here.) Blanchett stars as award-winning journalist/producer Mary Mapes and plays alongside Robert Redford as Dan Rather in this timely dramatization of the story behind Mapes/Rather’s fall after following a lead to expose President Bush’s war record. Truth opens in theatres October 30th from eOne Films, but readers across Canada can attend a sneak peek! Answer the trivia below for a chance to win!


Synopsis: Truth is an independent feature film based on the book “Truth and Duty” by Mary Mapes. In the vein of All The President’s Men and The Insider, it is the incredible true story of Mary Mapes (played by Cate Blanchett), an award-winning CBS News Journalist and Dan Rather’s producer, who broke the Abu-Ghraib prison abuse story, among others. The film chronicles the story Mapes and Rather uncovered that a sitting US president may have been AWOL from the United States National Guard for over a year during the Vietnam War. When the story blew up in their face, the ensuing scandal ruined Dan Rather’s career, nearly changed a US Presidential election, and almost took down all of CBS News in the process.

Thanks to eOne Films, Cinemablographer has 10 double passes to give away for the following screenings of Truth in Calgary, Edmonton, Halifax, Ottawa, Toronto, Winnipeg, Vancouver, and Victoria on Thursday, October 29th.

Truth isn’t the first time that Cate Blanchett has played a maverick journalist. In what other film does Blanchett portray a reporter fighting to expose the truth?

Send your answer to contests@cinemablographer.com with the subject ‘Truth – [city].
~Don’t forget to update your city!~
Please put only ONE city in your subject/email.

Contest closes Monday, October 26 at 12:00 pm EST.
Truth opens in Ottawa at The ByTowne and in theatres across Canada on October 30 from eOne Films.