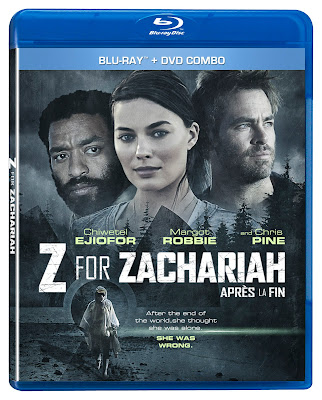 Don’t go cancelling the apocalypse just yet! Z for Zachariah brings the popular dystopian sci-fi novel to the screen in an emotionally-charged adaptation starring Chiwetel Ejiofor, Margot Robbie, and Chris Pine. Z for Zachariah comes to home video October 27 from VVS Films, and readers across Canada can snag a copy of the film on a Blu-ray/DVD combo before the world runs out. Answer the trivia below for a chance to win!


Synopsis: In the wake of a disaster that wipes out most of civilization, two men and a young woman find themselves in an emotionally charged love triangle as the last known survivors.

Thanks to VVS Films, Cinemablographer has 3 Blu-ray/DVDs of Z for Zachariah to give away! All you have to do to enter is answer the following question:

Z for Zachariah is based on a book by which author?

Send your answer and full mailing address to contests@cinemablographer.com with the subject ‘Zachariah’.

*Limit one email entry per person/household per contest. Multiple entries will be discarded and marked as spam.
**Entries that do not include an address may be discarded.
***Limit one win per person per month.
****Contest open to residents of Canada only.