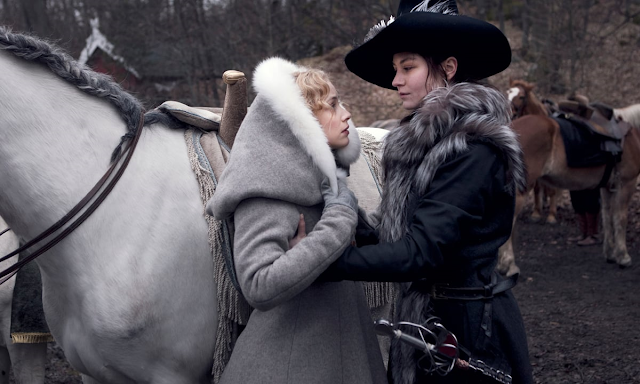 2015 is an epic year for Canadian co-productions with films like The Witch, Room and Brooklyn among the most impressive and high profile efforts. Add the sweeping historical drama The Girl King to the list, for this gorgeously realized production is truly an international affair. This joint effort with Finland, Sweden, and Germany tells the story of Sweden's Queen Kristina, played by Malin Buska, the nation's virgin sovereign circa 1650. Kristina is an unconventional monarch with her forward-thinking philosophy and interest in girls. The Girl King is a timely parable of power and love that feels relevant to today, for instead of playing the Royal Uterus, a queen’s then-conventional role, Kristina is Sweden's Elizabeth with a queer crown.


While there's nothing overtly Canadian about the story--Kristina and her girls don't play hockey, drink Tim Huron's, or guzzle maple syrup--but her love interest, Ebba, is played by Canuck ingénue Sarah Gadon, while other Canadian stars pepper the supporting roles and relish the script by Québécois scribe Michel Marc Bouchard (Tom at the Farm). The Girl King recalls Jean-Marc Vallée’s The Young Victoria with its dramatic story of a young girl thrust into power at an early age, only to be manipulated by her closest advisors and family members on matters of state and marriage. Her mother (Martina Gedeck, The Lives of Others) is a little too cuckoo to raise a queen, since Kristina is ripped from her clutches after mommy makes her kiss her dead father good morning and good night every day for two years. (Ick.) This creepy introduction reveals that The Girl King is no conventional slice of history.

As Kristina comes of age under the watchful guidance of her uncle, Chancellor Axel Oxensierna (Michael Nyquist from the Swedish Girl with the Dragon Tattoo films), and receives a lot of come-hither looks and marriage proposals from her cousins, she defies expectations by, gasp (!), thinking for herself. Yes, this girl king quotes René Descartes and the poets on the throne instead of towing the line in the war between the Catholics and the Protestants. She wants peace and her first vow following her coronation is to lead Sweden into a peaceful enlightenment.

Her other vow, a far more personal one, is to bed the beautiful countess making eyes with her at the party. Cue Canuck Sarah Gadon in a role that perfectly utilizes her doe eyes and delicate appearance. Ebba intoxicates Queen Kristina with her innocence and beauty. Forget those cousins with the modern day abs, this girl’s fit for a queen!

The Girl King takes Kristina’s awkward seduction of Ebba with just the right grain of humour. The monarch knows nothing about sex or women, and it’s hard to hide the fact that one swings the other way when rippling gentlemen callers with impressive titles are offering marriage proposals from around the land. Instead, Kristina uses her power to put Ebba into her care. Ebba, now a lady in waiting, is at Kristina’s side day and night. She even receives the title of Royal Bed Warmer as Kristina demands shared bodily warmth to roast the sheet from those chilly winter nights. (Why aren’t there Royal Bed Warmers in Canada?)

The Girl King lives on the strength of the performances at the heart of its love story as Buska and Gadon elevate the drama. Buska is a revelation as Kristina as she creates a headstrong woman wise beyond her years, but also one who grapples with power and responsibility at the cusp of her sexual awakening. The actress relishes a good close-up and ripples layers of angst, passion, and intelligence under Queen Kristina’s surface as her advisors undermine and thwart her. Her chemistry with Gadon is strong as the two adopt a master/servant relationship, but also one that develops into mutual respect until forces within the castle see their love as the devil’s work. Gadon plays the role of the innocent well to Buska’s tempestuous lust, as Ebba returns Kristina’s affection as a response, an order, as she shyly, hesitantly responds to Kristina’s touch with subservience and mild confusion. The affection’s there, though, in the restrained passion of Gadon’s performance.

The script by Michel Marc Bouchard, which is the playwright/screenwriter’s first English effort, soars better with the thematic overtones of Queen Kristina’s story than it does with the practical and sometimes stilted words that move it along at an awkward pace. Gay or not, Kristina emphasizes a woman’s right to independence just as much as she uses her inquisitiveness on the throne to champion Sweden’s independence. The Girl King plays well into the competing ideologies and practices in religion that divide sovereigns and nations as Kristina undergoes the guidance of Descartes (Patrick Bauchau) and while their exchanges are often forced, they reveal Queen Kristina’s inquisitiveness and her willingness to seek higher truths without concern for standard convention. Use of religion also situates Kristina’s pursuit of Ebba into ambitious territory, as one notably passionate tryst upon a sacred text, dubbed “The Devil’s Bible,” realizes the closest consummation of Kristina and Ebba as something both good and wicked as director Mika Kaurismaki (Road North) intertwines modern sensibility with the values that constrained love like Kristina’s from flourishing.

The costumes by Marjatta Nissinen, similarly, evokes notions of androgyny and gender fluidity as Kristina adorns herself in tomboyish pirate garb instead of the frilly laces that Ebba favours. The exquisite costumes are very impressive for a production of such modest scale, as is the ornate production design, which uses props especially well to highlight changes in time and industry. Beautiful lensing by Guy Dufaux (Barney’s Version) provides some moody interiors to match Kristina’s passion and rage. The music by Anssi Tikanmäki, however, is fatally overwrought even if the instrumentation sounds smartly researched and tailored to the time. The score of The Girl King frankly overwhelms the drama at almost every turn.

The supporting performances, though, are generally good. Gedeck, for one, is fantastically unhinged in her brief appearance as Kristina’s mother. Bauchau, on the other hand, is a stiff Descartes. (His death scene solicited a restrained ripple of laughter from the audience.) Buska and Gadon, however, are consistently strong, and as The Girl King rests on their chemistry, this slice of historical drama satisfies as a tale of forbidden love whenever the two actresses share the screen.

The Girl King screened at Ottawa’s Inside Out LGBT Film Festival on Thursday, Oct. 22 at The ByTowne.