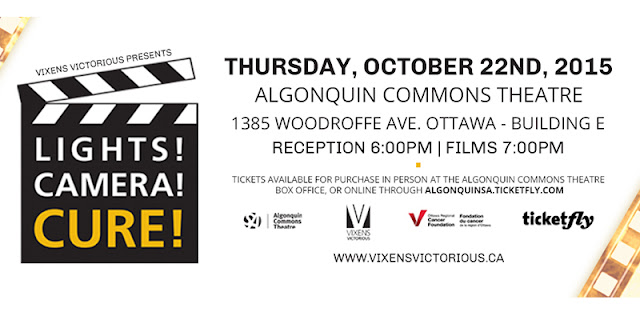 Ottawa boasts an overwhelming number of film festivals in the back half of October and it’s literally impossible for even the most avid of film buffs to take them all in. One festival aims to enter the spotlight by offering more than just an evening of great films. Lights! Camera! Cure! by Vixens Victorious launches next week and shines a spotlight on two worthy causes. For one, this film festival is also a charitable event for which all proceeds go towards the Ottawa Regional Cancer Foundation. Even better, Lights! Camera! Cure! champions filmmakers who are traditionally underrepresented in the film festival circuit: female filmmakers; or, Canadian female filmmakers more specifically.


Lights! Camera! Cure! is a new project from Jennifer Mulligan, Emily Ramsay, and Jennifer Mielke, who hope to engage Ottawa filmgoers with two worthy causes for the price of one. I joined Mulligan and Ramsay earlier this month to chat about their latest project, and the pair shows ample passion that Lights! Camera! Cure! can cut through the noise and make a difference.

Mulligan says that the idea for the film festival fundraiser arose after members of the festival team were touched by cancer. “Jennifer [Mielke] went through breast cancer,” she says, “and I lost my mom in July [2013] and Jennifer was diagnosed in August.” Mulligan, who also lost her father to cancer in 1996, notes she was mulling the idea of creating a film festival when Mielke voiced a desire to give back to institutions that treat and research cancer. “Jennifer wanted to give back to the Ottawa Regional Cancer Foundation, and I wanted to do the film festival, so decided to put the two together,” she says.

All proceeds from the Lights! Camera! Cure! screening go towards the Ottawa Regional Cancer Foundation. Ramsay adds that the ORCF has been quite receptive to the film festival. “They’ve been very involved,” she says. “There’s been someone at every meeting… making and soliciting phone calls on our behalf.” Having a charity involved in a start-up arts organization is invaluable, and often a requirement to access funds and resources, but Lights! Camera! Cure! gives rather than takes. “Jennifer [Mielke] saw a bunch of fundraising styles, like dinners, fashion shows,” Mulligan adds, “and we wanted to do something different and reasonable, so that a $50 dollar ticket isn’t a $250 ticket, and all the proceeds go to the cancer foundation.”
Ottawa film fans looking to support the cause shouldn’t expect a night of downers/or “cancer weepies” (my dismissive remark!) that often go hand-in-hand with film and cancer. “We strayed from having anything too heavy,” Ramsay explains on their line-up. “We have a few dramatic pieces, but nothing too overwhelming.” The two-and-a-half hour line-up, which includes sixteen short films, offers a wide range of escapism and good times ranging from a documentary about a boarding house for cats to a fantastical award-winning music video. The common thread, however, is the overall strong presence of female filmmakers across the board. (See the full line-up here.)

Films directed by women or featuring women in key creative roles are sparse in line-ups at festivals around the world. For example, Cannes, the most prestigious film festival in the world, only featured two female directors within the nineteen-film line-up of its 2015 Official Competition. TIFF, on the other hand, scores better with six out of twenty films in its high-profile Galas programme boasting female filmmakers. Still, women remain a minority in the festival circuit by any measure.

“I think female filmmakers are underrepresented in the industry in general, but also in Canada,” Ramsay explains when asked why Lights! Camera! Cure! focuses on female artists. “We just came off of going to a great film festival, the Lady Filmmakers Festival in LA [where Mulligan’s script Minerva’s War received a staged reading] and coming off of that and seeing the work that women filmmakers were able to do, I think it was inspirational for us. It’s great to see what women and their allies can create together, and to give them a chance to highlight their work is important, especially highlighting Canadian women.”

The spirit of seeing women and their allies making films and sharing them runs throughout the festival. Avid festivalgoers will note that Lights! Camera! Cure! doesn’t favour the typical tradition of emphasizing only the names of directors while promoting the films at the festival, which often leads to widened perceptions of gender imbalance while diminishing the efforts of other key collaborators. Instead, the Vixens credit and highlight female filmmakers such as writers, editors, and producers in addition to directors. “When I was looking at who was submitting and what roles they played,” Mulligan explains, “I noticed a lot of women in a key creative capacity, so not just a director but a writer, producer. One of the filmmakers who submitted sent a note with her film saying, ‘It was really a collaboration between the three of us, so I’d really like you to credit the other two filmmakers’ names as well.’ That inspired me, looking at her submission and seeing that there are women in these above the line creative capacities who wouldn’t normally be recognized.” Not only does the festival spotlight underrepresented talents, it also changes the conversation on the auteur-driven festival circuit by emphasizing the collaborative nature of filmmaking, rather than individual efforts.

This sense comes through Ramsay and Mulligan’s own experience as filmmakers. “I also think that since we’re both screenwriters and producers, and we’ve made various different films and worked on different projects in different capacities, we know it’s not just one element that a person’s involved in, especially in independent film in Canada, a person usually does a few things on a film set,” notes Ramsay. Mulligan adds that filmmakers, especially women in independent film, often take on the role of a “slashie” by assuming various roles in production, like the writer/assistant director or producer/grip, etc.

As filmmakers, the pair has some experience with the gender divides and difficulties in the film industry. “There was one situation where my film didn’t get in to a festival,” Ramsay explains, “and I found out that it wasn’t even viewed. I looked into it and called them out, and it ended up getting accepted into the festival.”

“There’s just an extra layer,” Mulligan says on gender in the industry. “I’ve heard various things, like there are the ‘darlings’ [ie: the Egoyans and the Dolans] who get everything. I think there’s always this extra door women need to push through.” Being filmmakers themselves, as well as the current showrunners of the longstanding Digi60 Film Festival and the minds behind the online community Ottawa Film Scene, the pair brings a good sense of the broader scope of the film community to the festival, and uses their experience to foster dialogue and nurture talents.

When it comes to noting women in Canada who are pushing through these doors and layers, the duo quickly lists several names with enthusiasm. “Mina Shum,” Ramsay offers quickly. “I’ve been a fan of hers since I was 10. She did a great short film in 2013. [I Saw You, which is available online here.] She’s great, but I think she, just like anyone else, has enough challenges, besides the challenge that Canadian filmmakers face in working to create and fund their art, I think women filmmakers have it even harder.” [Read a review of Mina Shum’s latest film Ninth Floor, which recently premiered at TIFF.]

Ramsay adds Rhymes for Young Ghouls star Devery Jacobs as an inspiring up-and-comer. “She successfully crowdfunded her short film and I think she’s finishing it up this fall. I’ve been following her. She’s at my alma matter John Abbott, and to be a young Indigenous women making film in Canada is amazing.”

The pair has special praise for Ottawa upstart Morgana McKenzie, whose award-winning and professionally-cast short film We All Go the Same screens at Lights! Camera! Cure! “Morgana is a 16 year old filmmaker,” Ramsay says enthusiastically, “and I think she just has so much talent. She’s been officially selected into many festivals [including TIFF Next Wave Jump Cuts and the Calgary International Film Festival] and is being fostered by the festival process. She’s won many prizes, including the Ottawa Independent Video Award [for We All Go the Same]. She successfully crowdfunded her latest film Ellie, getting twice her goal in thirty days. She’s a talented young woman who needs to be fostered by the people in the industry and the people who work here because if she were to leave Ottawa, Ottawa would lose a major talent.”

“She could be the Richard Linklater of Ottawa,” Mulligan adds. “She could be the person who builds the ground, who people look for.” In a city with a growing film scene and a local festival circuit growing just as strong, Lights! Camera! Cure! offers the future of Ottawa’s film community. Like the cause at the heart of the festival, Lights! Camera! Cure! gives back to the community that gives it life.

Lights! Camera! Cure! screens in Ottawa on October 22 at Algonquin Commons Theatre.
Tickets are on sale and can be purchased online at www.algonquinsa.ticketfly.com or Algonquin’s ticket box office, located at 1385 Woodroffe Ave. Tickets are $50.00 (+ surcharges) and proceeds will go to the Ottawa Regional Cancer Foundation.